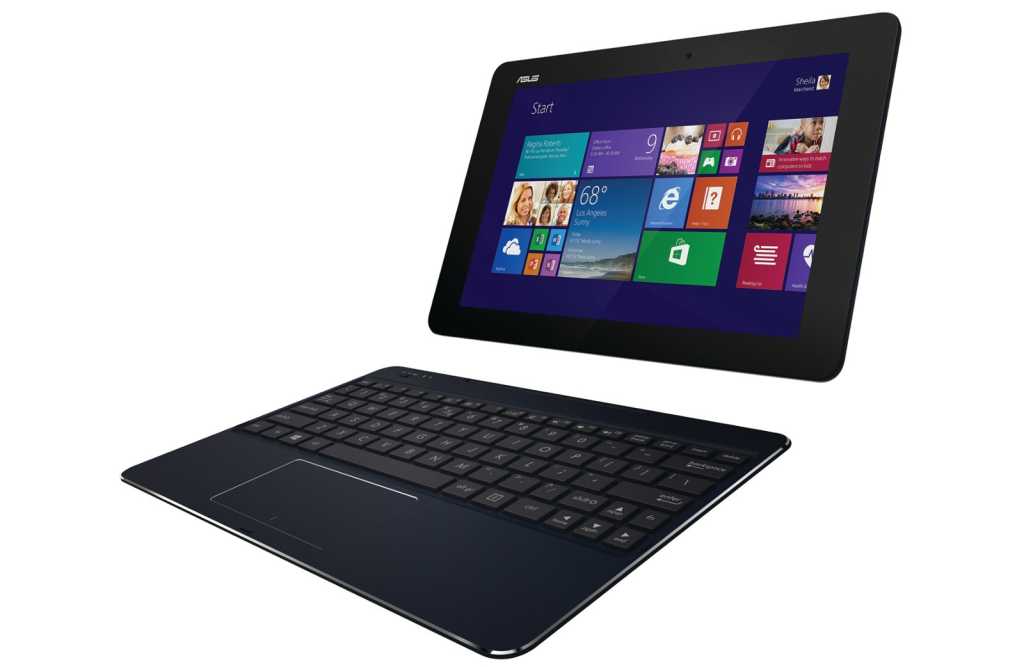 Promoted as a 2-in-1 tablet and laptop solution, the little Transformer Book T100 Chi is simply a Windows 8 tablet with a clip-on wireless keyboard. Put together the result looks quite smart and we cannot fault build and finish quality at the price. However it is compromised as a laptop by feeling too cramped in working screen space, with a frustrating sleep-happy keyboard and its tiny awkward keys. And as a tablet it fails to be any more endearing than every other unloved Windows tablet before it. Its saving grace may be deemed its circa-£400 price, for which money you can find a real laptop or a decent tablet; but admittedly not both on that budget.

Asus has re-energised its Transformer T100, quite literally by adding Chi to its name. Besides the rebranding, the Windows tablet also gains a newer Intel Atom processor and various other small tweaks. (See also: 15 best budget tablets 2015 UK.)

The Transformer T100 arrives in its box like a regular clamshell folding laptop, albeit a very small one with 10.1-inch screen. The unit actually comprises two parts – a Windows 8 tablet and a snap-on keyboard assembly. When docked together you get some of the benefits of a real laptop, such as mechanical keyboard and finger trackpad, although screen angle is more limited in its tilt, almost certainly to prevent the back-heavy unit from toppling over backwards. Also see: Best new tablets coming in 2016.

Construction quality is good, with both tablet back and the entire lower keyboard section made from anodised aluminium; this was finished in dark blue on our sample, with a polished bevelled edge detail.

In contrast to the earlier version, the keyboard connects to the tablet only by Bluetooth. Asus has set agressive power management here which turns off the keyboard after just a few minutes left idle. This leads to delays whenever you go to use keyboard or trackpad after a moment away, as you must wait for the radio link to wake up and re-establish, a process that can take several frustrating seconds.

With the tablet and keyboard sections as two electrically unconnected items, you must also charge them separately, each through their own Micro-USB 2.0 ports. The keyboard is very frugal in its power consumption, lasting for days and charging inside of an hour. The same is not true of the tablet, and we found it could take two hours on charge with a flat battery before we could even turn the device on. To complete the charge to capacity took around 8 hours using the supplied 10 W USB charger, which is a frankly ridiculous time to wait.

In our standard battery rundown test, the T100 Chi with its 30 Wh battery lasted for 10 hr 16 min, playing a looped HD film over Wi-Fi with screen set to 120 cd/m^2. Asus claims 11 hours, although their test conditions list a very dim 80 cd/m^2 screen brightness.

The tablet has a 10.1-inch IPS glass-fronted touchscreen with 1920 x 1200-pixel resolution, giving it a more useful 16:10 aspect ratio than the usual Android and Windows tablets that slavishly feature overly letterbox 16:9 screens. Pixel density is relatively high at 224 ppi, giving clean and sharp definition. The OS interface is set by default to 150 percent scaling to make the Windows desktop more sensibly sized.

There’s the usual inevitable problems trying to run Windows by fingertip. The standard Windows environment is barely navigable through touch, leaving just the moribund Metro interface and its dearth of useful applications.

Asus includes an active battery-powered stylus as some recompense for prod ding the screen or you can revert to the small trackpad on the keyboard base so long as you don’t mind waiting a few seconds every time you need it. See also: 7 best e-readers of 2015 UK: What’s the best e-reader?

Two USB ports are included, a Micro USB 2.0 on the left side (when viewed with the tablet docked to keyboard) and a Micro USB 3.0 on the right. Also available is a microSDXC card slot and Micro HDMI video port. Tiny speakers are sited either side for stereo, and volume is adjusted by a rocker switch on the left.

If you need to plug in any regular USB device like a keyboard, mouse or USB flash drive, you will need to find yourself a Micro USB to Type A USB female adaptor and remember to carry it with you wherever you go.

Powering the T100 Chi is a 1.46 GHz quad-core Intel Atom processor, specified with a Burst mode to 2.39 GHz. This is now a 64-bit processor even if Asus supplies the Transformer with a 32-bit version of Windows 8.1 with Bing, the economy edition that at least tends to garner less crapware out of the box.

Memory is just 2 GB and not upgradable, rated at 1333 MHz although Intel’s specification suggests the processor is limited to a 1066 MHz memory clock.

For storage there is an internal 64 GB flash drive, not a laptop-style SATA solid-state drive but eMMC – effectively a built-in SD card, in common with other tablets. Available space for the OS and the user combined is only 48 GiB as indicated by Windows, with 10 GiB reserved for a recovery partition.

This flash drive provides performance roughly comparable with a 2.5-inch hard disk in its sequential read speed, and half that speed in sequential writes.

For wireless connection there is Bluetooth 4.0 and 11n Wi-Fi but there’s no option for cellular internet connectivity. There are cameras fore and aft, specified as 2 Mp and 5 Mp. (See also: 38 best tablets of 2015: What is the best tablet in the UK?)

The older Transformer T100 scored 2330 points in PCMark 7 with its 1.33 GHz Atom chip and the same memory quota. The new Chi version of the Transformer showed a 17 percent increase, to 2741 points, while PCMark 8 Home returned a relatively poor result of 1223 points (1225 points in Accelerated mode). The Work module of PCMark 8 saw a large drop in score when moving from Conventional to Accelerated mode (1550 and 1236 points respectively) which highlights that the weak graphics processor is little help for OpenCL-compliant programs.

Meanwhile Cinebench 11.5 returned figures of just 0.35 and 1.50 points for single- and multi-core processor operation. Cinebench 15 would not run, as like most modern applications it is 64-bit mode only.

Geekbench 3 reinforced the lowly performance of the Intel Atom chip, scoring just 961 points single-core, and 3088 with all four cores at work. Clearly the Transformer is very underpowered when compared to Windows laptops; but also against its main rival the iPad Air 2, which scores around 1815 and 4515 points in Geekbench – or 88 and 46 percent faster in these two tests.

Where the Transformer also falls down is in graphics performance. While there’s a wealth of graphically rich action games available for the iPad, the T100 Chi struggled to play our Windows game tests at their lowest settings.

In the Batman: Arkham City benchmark, it averaged 18 fps when set to an easy resolution of 1280 x 720 and Low detail. At the same settings, Tomb Raider 2013 also limped along at the same unplayable 18 fps framerate.

Storage speed from the eMMC card was mixed, up to 123 MB/s for sequential reads but just 59 MB/s for sequential writes, according to CrystalDiskMark. Testing 4 kB random data performance, we measured around 20 MB/s reads and 16 MB/s writes, rising to just 40 and 19 MB/s when attempting a higher 32-thread queue depth. So usefully it is faster than a hard disk when it comes to small file transfers, which should help prevent Windows feeling quite as slow as it can on hard disk-based laptops. (See also: 10 best kids’ tablets 2015 UK.)