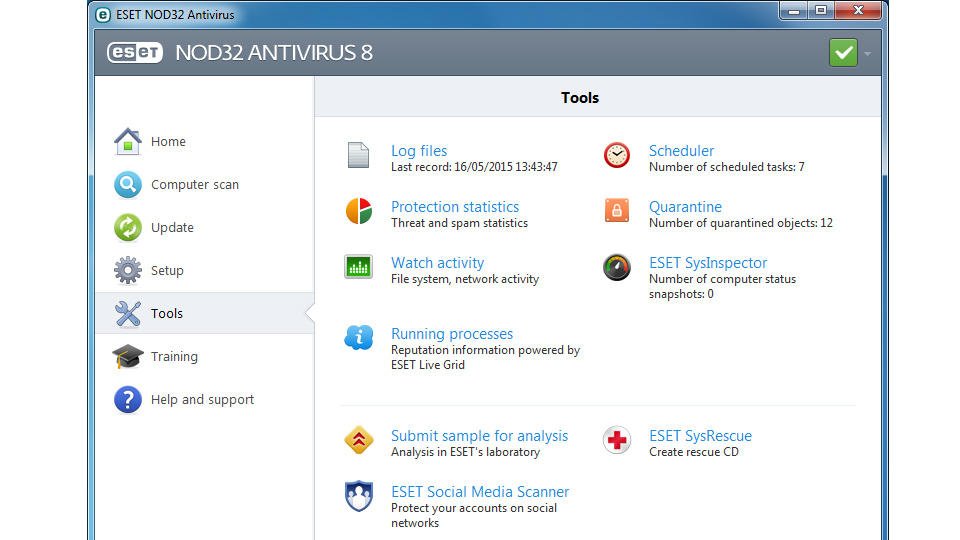 ESET NOD32 Antivirus is a sound antivirus product with some useful extras, though it’s a bit surprising anti-spam isn’t included in the product. The software is easy to use and doesn’t disrupt the normal function of a PC it’s running on. Technically, it’s a strong contender, without being in the front rank.

ESET is a Slovakian company with offices in many countries and has been producing security software since 1992. NOD32 is the core of several ESET products, but ESET NOD32 Antivirus is the simplest and cheapest of them. (See also:  Best antivirus software.)

Even so, it has a reasonable range of features, starting with antivirus and anti-spyware protection, but also including anti-phishing, a social media scanner, and exploit blocker. You have to look to ESET Smart Security for anti-spam, firewall, parental control or mobile protection and there’s no backup or tune-up provision even in that package.

ESET NOD32 Antivirus has one of the best-looking interfaces of any AV product in our view, with a clean, no-nonsense approach. It has category headings down the left-hand side and icons and selection menus in the main part of the control window.

There are some useful extra features in the scanner, such as the ability to repeat the last scan processed and to specifically target removable media. The software logs scans and incidents and can display statistics on recent activities.

On our test scans, which use 50GB of ‘known clean’ files to test the scan rates of the IS products we review, we were surprised to find ESET spotting suspect files, which other products didn’t flag. This was because we had detection of ‘potentially unwanted programs’, or PUPs, turned on and software like the Conduit search engine falls into the category. Since Conduit is such an awkward program to remove, it’s surprising other IS suites don’t flag it, too.

In our tests, ESET took just under 22 minutes to scan 50GB of assorted files, examining 135,420 of them to produce a scan rate of 103.8 files/s. This is a good throughput, above the average of the IS apps we have tested.

Even better, on rescanning the same basket, the software looked at only 9,553 files and took just 32 seconds to complete the task. This indicates a very high degree of fingerprinting, which avoids rechecking files which haven’t changed since previous scans.

We also saw a low resource hit, when we timed 1GB file copies with and without a full scan running in the background. There was a 35 percent slow-down, against an average of 67 percent over all the products we’ve reviewed.

The German test site AV-Test didn’t find quite the performance we saw, over its much wider set of tasks. It recorded a 5-second slowdown, against a group average for its own group of 4s. This earned it a score of 3.5/6.0, which isn’t too good in anyone’s book.

However, in the Protection category, it scored a much better 5.0/6.0, with a 100 percent detection rate for established malware and 96 percent overall against zero-day attacks. In the second month of testing, it managed 98 percent detection, against an average of 94 percent.

Finally, it only clocked up 3 false detections, when the average in its group was 9. This earned it a full 6.0/6.0 in the Usability category of the suite. This gives it an overall score of 14.5/18.0, which is a worthwhile result, though not among the leaders in the field.