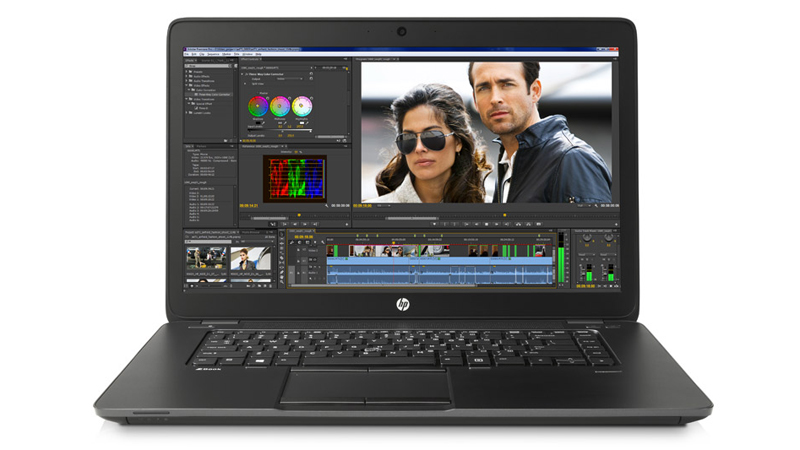 Hewlett Packard has done well to build a lighter weight 15-inch mobile workstation laptop with much of the strength and integrity of its traditional models that are far less mobile in real terms. Sacrifices have been made to the main CPU by fitting dual-core rather than quad-core, and the AMD GPU is a middleweight part rather than fire-breathing FirePro. But importantly the 15u runs cool and quiet enough not make itself a nuisance, even under load. Assuming the version we tested will cost under £2000 it could provide decent value, majoring on resilience more than style and sheer performance, but well enough equipped to prove attractive to the target professional audience.

Tough but portable, HP‘s ZBook laptop will appeal to a professional audience. We review the HP ZBook 15u G2. Also see:  Best laptops 2015.

Now that HP has migrated its mobile workstation laptops from EliteBook to ZBook, we find two distinct version of the 15-inch workhorse from which to choose.

The regular ZBook 15 G2 is closer to the original brick-built EliteBooks, around 40 mm thick and bending the scale needle close to 3 kg – although that’s still a trim and toned-up take on the classic bombproof mobile power laptop.

Coming in at a little over 2.0 kg and just under 25 mm thick, the new HP ZBook 15u is the more fashionable variation of ZBook. The added U in the name seems to point to Ultrabook, Intel’s much abused marketing name for a MacBook Air-style ultraportable running Windows.

The ZBook 15u appears to be in its second generation (G2) although since this is a brand new product we suspect the suffix was added so it wouldn’t look out of date next to the revised G2 version of the ZBook 15. While far from emulating the carry-anywhere sub-20 mm, sub-1.5 kg notebooks of today, it’s relatively compact form puts it alongside other thin and light workstation notebooks such as the 15-inch Apple MacBook Pro and Dell Precision M3800.

The case of the ZBook 15u is almost entirely constructed from metal, a lightweight cast alloy for the main chassis, with metal top plate around the keyboard and lid back. The 15.6-inch widescreen display with matt anti-glare finish is available as either a budget TN or higher-grade IPS version, both at 1920 x 1080 resolution. There’s no option for a touchscreen display, arguably a wasteful frippery on a professional mobile workstation. See all  laptop reviews.

On the left side is the exhaust outlet for the single internal cooling fan, a VGA D-Sub video port, two USB 3.0 and a slot for smart cards. Along the right we find a 3.5 mm headset jack, full-size DisplayPort 1.2, another two USB 3.0, gigabit ethernet (with sprung flag, to help fit into the slim edge), DC power inlet, and a proprietary docking slot. There’s no underside docking-station port as you’d find on most business laptop, but HP promises to supply an adaptor to fit this side port with two more digital video outputs. Missing from the port line-up is the Thunderbolt 2 port now found on the non-U ZBook 15 G2.

The entire case bottom is easily removable from one slide-release button, providing access to most of the upgradable components such as memory, storage and wireless connectivity.

Our sample had 16 GB of memory on two 8 GB SO-DIMM modules and a PCIe-attached M.2 SSD, 256 GB in size. You can add a 4G LTE module, access the 802.11ac mini-PCI card and change the 50 Wh battery from here too. Even with the solid-state drive fitted, there’s also space to add a 2.5-inch SATA drive.

For main processor duties, this model had a new Broadwell series 2.6 GHz Intel Core i7-5600U, and unusually for a notebook billed as a professional workstation, this is a dual- rather than quad-core chip. This is the top specification, with an option on the 2.4 GHz version of the same chip (5500U)

HP explains that thermal issues prevented it from fitting a quad-core processor into this relatively thin case. In contrast, both Apple and Dell do use quad-core Intel Core i7 mobile processors in their counterparts, although the latter at least can suffers from cooling issues, requiring its fans to rev up to high speed to keep internal temperatures within limits.

For graphics processor there is a choice of just the integrated Intel HD Graphics 5500 from the Intel CPU, or this with an additional AMD FirePro M4170 dedicated GPU. Unlike the fat ZBook 15, there’s no Nvidia option here.

The AMD FirePro includes 1 GB of GDDR5 memory, and is designed to switch into action when required with AMD’s Enduro Technology, a rebrand of its Dynamic Switching Graphics (DSG) system.

At time of review, the only variants of the ZBook 15u G2 we could find offered from the HP UK website were without discrete AMD graphics, and up to 8 GB of system RAM only. With the lower 2.4 GHz processor, integrated graphics powering the IPS display, and 256 GB Z Turbo Drive (HP’s name for the PCIe-attached SanDisk SSD), the ZBook 15u G2 is priced at £1320 inc VAT.

So given the measurably superiority of the quad-core machine, a closer point of comparison for the ZBook 15u G2 may be the 13-inch version of the MacBook Pro with Retina display, since that uses a similar dual-core Broadwell chip.

PCMark 8 Home test returned just 2937 points, rising to 3631 points with GPU acceleration, while the Work test showed a bigger improvement between standard and accelerated modes, with 3108 and 4489 points respectively – a 44 percent boost in scores here by leveraging the AMD graphics.

The HP ZBook 15u G2 is not designed for entertainment but we tried a few of our standard gaming tests to get a feel of its capabilities. Batman: Arkham City would play at native screen resolution of 1920 x 1080 at an average framerate of 53 fps, when set to High detail. At Very High detail this dropped to a still playable 46 fps, but the next step of Extreme detail halved its playback to just 23 fps. Also see:  Best gaming laptops 2015.

We thought we might see better in Tomb Raider 2013 since this often plays better with AMD graphics, but found that even Normal detail only allowed a 31.5 fps average; High detail really scuppered gameplay at 23.5, while Ultra and Ultimate stuttered along at just 17 and 7 fps.

Metro: Last Light was similarly unplayable with our usual 1080p settings of High and Very High, returning average framerates of just 19 and 5.7 fps.

The SanDisk A110 M.2 SSD takes a PCIe connection, enabling storage performance to break through the SATA limit, if only by a relatively small margin. Using CrystalDiskMark on the C: boot drive, we saw sequential speeds of 639 MB/s for reads and 557 MB/s for writes. Small 4 kB random IO was fast at 24.2 and 81.4 MB/s for reads and writes, rising at queue-depth 32, to 213 and 175 MB/s.

The battery of the ZBook 15u G2 is sealed behind the removable bottom plate, but can be removed quite easily if required. At 50 Wh it’s a midrange capacity, and in our standard looped-video rundown test allowed the laptop to run for 6 hr 14 min, with screen set to 120 cd/m^2. That’s an appreciable step-up from typical Windows workstation laptops, if much shorter than you can expect from the comparable 13-inch MacBook Pro with its Broadwell chip, which runs for up to 17 hours in the same test. See  all laptops buying advice.