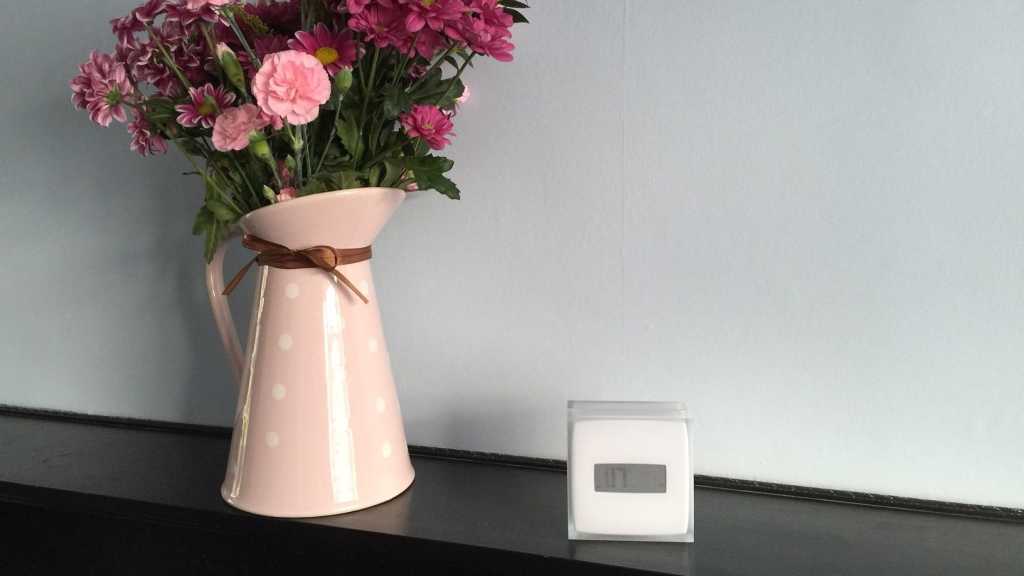 Netatmo’s thermostat is relatively basic, lacking any kind of presence detection, but it works well and is one of the cheaper options. The display lets you adjust temperature and nothing else, so you’ll need a compatible phone or tablet to get the most from the system. 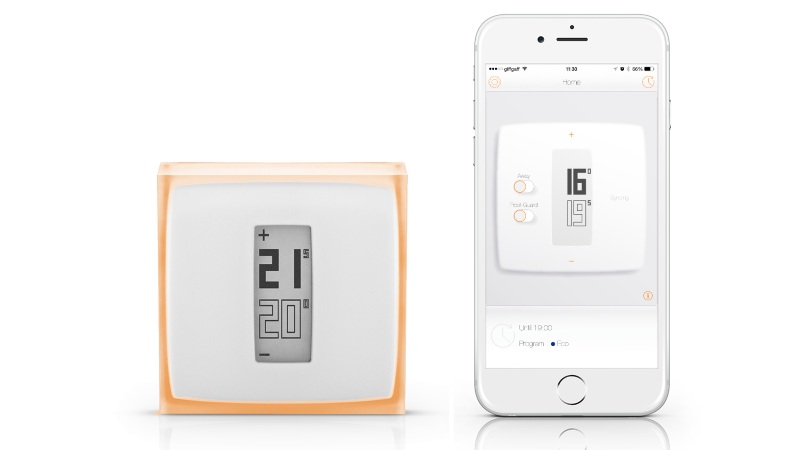 Alongside some of the big names in smart thermostats – Nest and Hive to name just two – is Netatmo. We’ve already tested out the company’s Urban Weather Station, and now it’s the turn of the simply named Thermostat for Smartphone. See also: 9 best smart heating systems

There are essentially two types of smart thermostat. One controls the heating in the entire house and the other lets you adjust temperature in different zones. Netatmo, Nest, Hive and Tado fall into the former category and systems such as Heat Genius and Honeywell Evohome fall into the latter.

This means you’re likely to be considering the Netatmo alongside Nest, Hive and possibly Tado. All four systems allow you to control your heating remotely via a smartphone or tablet app (and in most cases on the company’s website) and are more intelligent than the programmer you’re likely to have in your home right now.

The Netatmo thermostat lets you set a different schedule for each day of the week, with no limit on the number of heating periods. It’s possible to create, name and save different schedules and switch between them, so you could for example have a ‘normal’ schedule and ‘off school’ for half terms and holidays when you might want a different heating schedule.

Over the first week or so, the system will learn how quickly your home heats and cools and then offers you to switch to a new PID algorithm (proportional integral derivative). Instead of merely looking at the current temperature and comparing it with the setpoint (your desired temperature at that time) it will also take into consideration your home’s insulation effectiveness as well as the exterior temperature, by using weather data from the internet or – if you have one – an Urban Weather Station outdoor module. 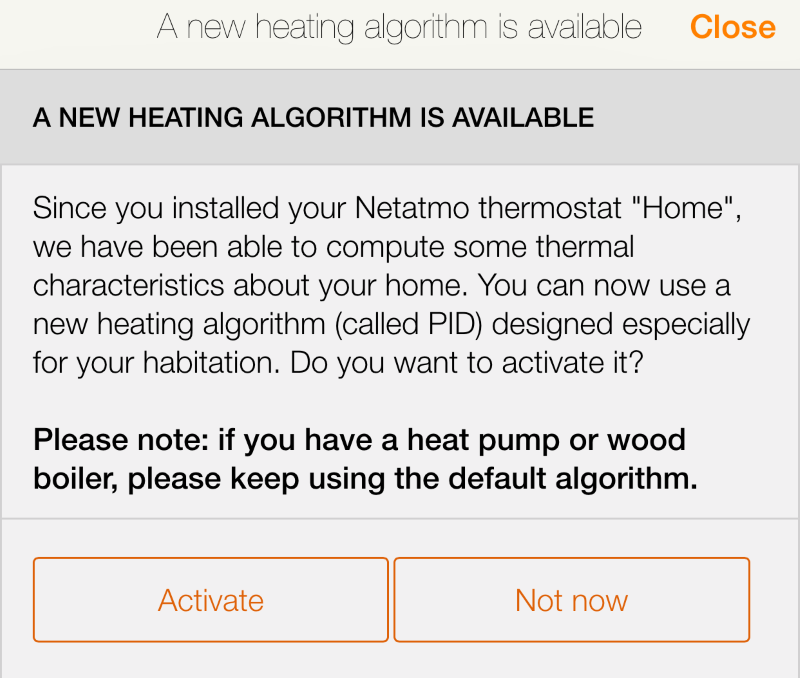 This means it can fire up the boiler early if it’s colder than usual, or later if it’s warmer. It can also more efficiently maintain temperature as it knows how long it takes before your home starts to cool down.

You can install the free app on your iPhone, iPad, Android phone or tablet (4.0 or later) or Windows Phone (version 8 or later). If you own none of these devices, you can use Netatmo’s website.

From the app you can adjust the temperature (setpoint) and put the system into ‘Away’ mode which essentially turns the heating off. There’s also a Frost-Guard toggle, which maintains a minimum temperature even if you’re away to prevent pipes freezing. At the bottom you can see a summary of the current heating period, but you can also use a slider to manually override the current temperature with a different one for a certain amount of time – this can be changed in the settings.

There are advanced settings for temperature offset and hysteresis threshold, but few will need to adjust these. 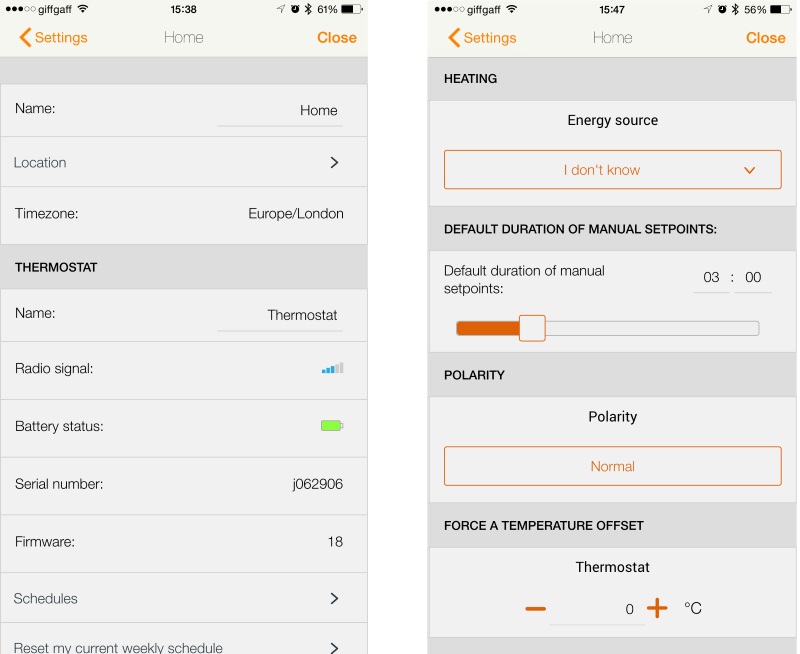 Turn your device from portrait to landscape and you’ll get a graph showing your home’s temperature history. This is almost identical to the feature in the Urban Weather Station app. It shows your room temperature, the setpoint temperature and the amount of time your boiler was on (the orange bars). 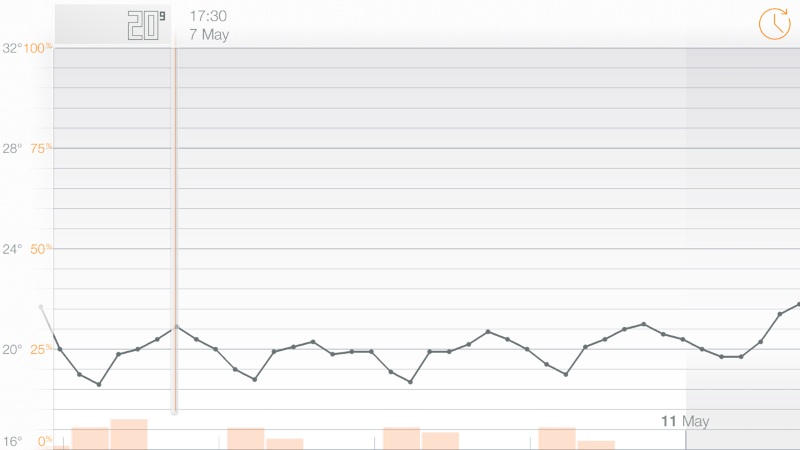 While all this sounds quite advanced, other systems offer more. For example, the Nest display can sense if anyone is in the house or not. This means if you go out and leave the heating on, it will automatically turn it off after a while to save money. Similarly, Tado uses your phone’s GPS to detect when you leave home as well as when you’re on your way back, so it will turn the heating on and off based on your location. 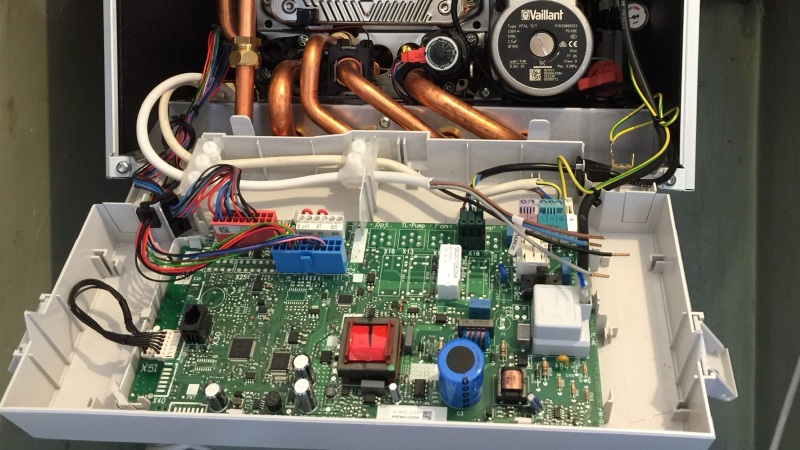 The kit includes everything you need to mount the relay on the wall by the boiler, so you need to supply only the tools. In total it took around 20 minutes to install the relay, but quite a bit of extra time to research how to do it beforehand. 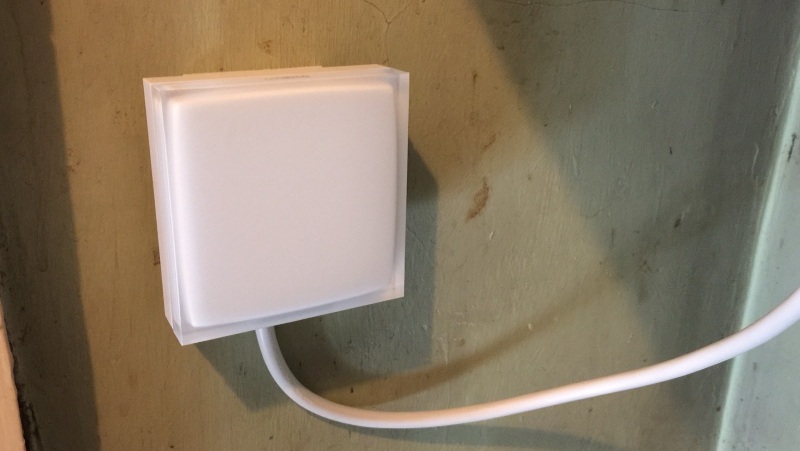 We also had problems – just as with the Urban Weather Station – trying to configure Wi-Fi via the app. First, your phone pairs via Bluetooth with the relay and then attempts to copy your Wi-Fi configuration (including password) from your phone. This wouldn’t work for us, so we had to configure it manually.

The relay and thermostat are paired in the factory, so once the included AAA batteries were inserted it was simply a case of attaching the plastic stand and placing the thermostat somewhere appropriate.

The benefit of installing the system this way is that you can move the thermostat between rooms to ensure a comfortable temperature wherever you happen to be.

If you’re replacing a wired thermostat, then you attach the Netatmo thermostat in its place on the wall. There’s a plastic trim supplied to cover screw holes or old paint left by the old dial. Instead of connecting the relay to the boiler, you attach the supplied UK 3-pin plug and connect it to a mains outlet somewhere with a decent Wi-Fi signal.

If the relay loses its connection to your router, or your internet goes down, it will carry on following the schedule you set until the connection is restored. If it was in Away mode, it will stay that way. You can still control the temperature from the thermostat, but not from a smartphone or tablet, since this has to connect to Netatmo’s servers which in turn communicate with the relay via your broadband connection.

Unusually, the thermostat has an E-Ink display. It shows the current temperature in outlined numbers, and the setpoint in black. You press the display at the top to increase the setpoint, and the bottom to decrease it.

An orientation sensor rotates the display so you can have it portrait or landscape, and there are five coloured stickers you can attach to colour code the thermostat according to your décor.

Because it sits behind a textured plastic cover, the display isn’t quite as sharp as you might expect and it doesn’t show any other information, aside from an error when it can’t connect to the relay. At least this is more info than the Tado thermostat shows, which is none, since it has no display. 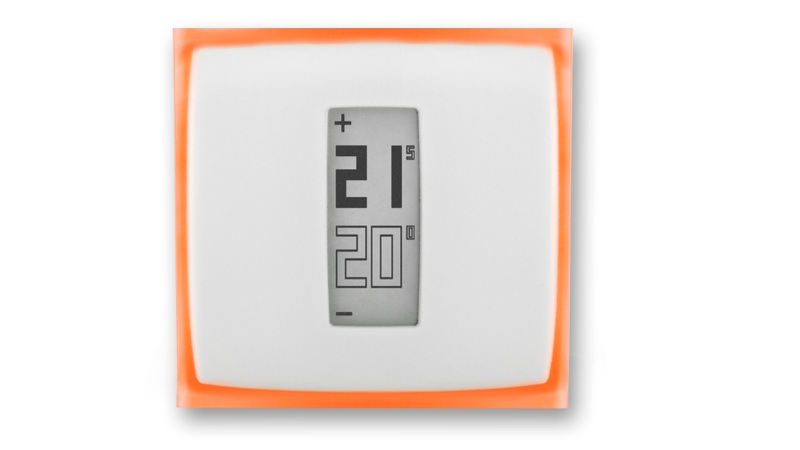 E-Ink does have advantages, too. Since power is required only to update the screen, the batteries should last a full year. The bad news is that it isn’t backlit, so you can’t see it in the dark.

We still prefer the Nest display, partly because it looks more hi-tech, but mainly because it offers a lot more information and control and it’s easy to give it a spin to turn down the temperature as you’re leaving.

One thing in the Netatmo’s favour is price. It costs around £140 online and there are no subscription fees to pay. If you’re not confident installing it yourself, you can buy it from EDF who will supply and fit it for £199.

However, if you look hard, you can get a Nest for the same price, and it’s equally easy to install whether wired or wireless. (It’s not strictly wireless as it can’t run off batteries, though.)