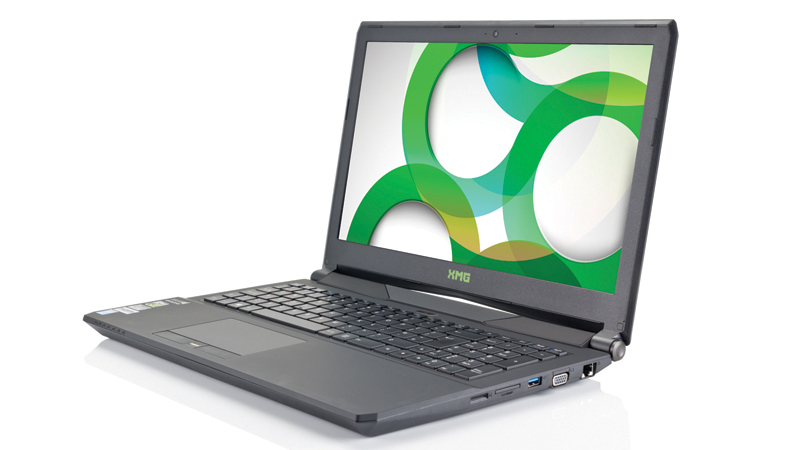 The XMG A505 is a versatile choice if you wish to define your gaming laptop experience. Finish quality and style are conspicuously behind the leaders here, although display image is good and the Intel/Nvidia combination means the most challenging games play with ease. The second-fastest storage we’ve ever tested means one quick everyday laptop, even if storage performance counts for near nought when you’re actually playing Windows games.

Build your own gaming laptop with this barebones chassis from Schenker. We review the Schenker XMG A505 power  laptop. Also see:  Best gaming laptops 2015.

If you can’t find the exact gaming laptop you’re looking for, in terms of internal component specification at least, you can always configure just what you need with the help of an empty case and a custom laptop builder.

That’s what Schenker Technologies offers in Germany, with a local office to serve your needs in the UK. And more specifically for gamers’ needs, there’s the company’s sub-brand XMG, geared for gaming.

The Schenker XMG A505 is the 15-inch model from the brand’s Advanced series, effectively the starting point for its XMG-branded gaming machines. It’s based around an Nvidia GeForce GTX 960M embedded graphics processor and Intel Core i7-4720HQ, with most other components up for for personal configuration.

Like most custom laptops, the starting point is a barebones chassis provided by Taiwan case maker Clevo. Great design and style are not the company’s forté, majoring instead on making solid and traditional chunky cases that channel the 1990s notebook PC. With the help of efficient modern silicon like recent Intel Core series chips and Nvidia mobile GPUs, which require less cool air rammed across to prevent meltdown, the casework has finally come down in weight and size. So now we find a sub-2.5 kg all-up weight for the Clevo N150SD case, relatively svelte at a little under 33 mm fat.

The angular all-plastic case here carries a matt black finish on lid back and top deck, a virgin field to plant perennial greasy fingerprints, with the underside made from a textured ABS black plastic. Deep open grilles stretch right across the bottom plate, as do many screws for disassembling the laptop, while a single hatch is readily removed by releasing just two screws, to replace the fitted 62 Wh lithium-ion battery pack.

Unusually for even modern 15-inch laptops, an optical drive is fitted on the left side, along with three discrete 3.5 mm audio jacks to cover headphones, mic in, and Toslink digital audio output. On the right is a third USB 3.0 port, separate card readers for regular SD and microSD cards, plus ethernet and VGA ports.

An issue was found in build quality, where the case had not been assembled correctly, leaving part of the side panel standing out by the audio jacks. A strip-down and rebuild would fix this.

To pipe digital video to a modern display there are HDMI and Mini DisplayPort on the back panel below the hinge, along with the DC power inlet and the fourth and final USB 3.0 port.

The keyboard features the usual 15-inch-style number keypad to the right, and the keys themselves are responsive and with slightly more travel than the low-profile keys we find on some modern laptops. Following others’ lead, the XMG has a backlight keyboard, simple white LED with two brightness levels, although it had the worst case of unwanted light bleeding from around the keys we’ve seen.

Offset to the left like every other lopsided Windows laptops is a large trackpad,unusually with separate mechanical buttons for left and right click. These are reliable and predictable compared to half-baked buttonless designs but do have somewhat long travel and are difficult to depress fully until you adapt your hand shape to allow your finger or thumb to dig downwards. Staged between these two buttons is a basic fingerprint scanner. Also see:  Best laptops 2015.

The Intel and Nvidia processors are locked for all A505 configurations, a Core i7-4720HQ and GeForce GTX 960M, the latter with 2 GB of built-in GDDR5 video memory. Also fixed is the 15.6-inch 1920 x 1080 AHVA display from AU Optronics. In our tests we found the panel to have excellent colour coverage (96 % sRGB) but more limited contrast with a ratio of 490:1, where the best IPS screens exceed 800:1. Colour accuracy was impressive at Delta E 6.1 maximum deviation, but with an average across 48 swatches below Delta E 1.0.

Raw speed from the processor and memory combination were right in line among its peers using the same CPU and 1600 MHz memory – Cinebench 11.5 scored it with 1.55 points single-core and 6.97 points multi-core, for example. Similarly the Geekbench 3 scores of 3255 and 12516 points were as expected for the specification.

Where the XMG A505 didn’t only excel but totally startled the lab tests was in its storage performance. With the help of a new Samsung SSD featuring four lanes of PCIe 2.0 to connect to the data bus, the A505 returned the fastest storage results we’ve seen after the 2015 MacBook Pro. It wasn’t quite up to the 1500 MB/s we’ve seen from the latter but still sustained 1102 MB/s sequential reads and 800 MB/s write speeds. Down at the small-file level it hit 90,000 IOPS, which while a great speed seemed almost pedestrian in comparison to the scorching sequential performance.

The A505 also proved relatively frugal in battery terms, returning the second longest unplugged running time of the six in this group, only beaten by the absurdly enduring Alienware 13 and its 10-plus runtime. The chasm between them was still vast though, with the XMG lasting for just 4 hr 16 mins in the same video rundown test. Also see:  Laptop Advisor.

Running a GeForce GTX 960M, one model below the ‘965M fitted to the MSI GS60 and three below the top ’980M, the XMG nevertheless managed to demonstrate the sheer graphical power available from Nvidia’s new 900 Series mobile GPUs.

More for reference against general consumer notebooks, we ran the basic Tomb Raider 2013 test, which was dispatched with good three-figure framerates – 123 fps at 720p and High detail, and 102 fps at 1080p and Normal detail. By comparison, Intel’s better integrated graphics solutions will get you around 20-30 fps here.

The sweet spot for this game was the native full-HD resolution and Ultra detail (50 fps); or you could try Ultimate detail and still expect a playable 32 fps, albeit with a minimum that dropped to a less fluid 23 fps.

Batman: Arkham City was fluent at all detail settings and full-HD resolution, right up to its maximum Extreme image quality setting, which averaged a solid 58 fps.

Trade up to the visual spectacle that is Metro: Last Light and you should still find similar framerates at full-HD and High detail (57 fps), although the push to Very High with additional effects finally slowed the A505 to a defeated average of 17 fps. See  all laptops buying advice.