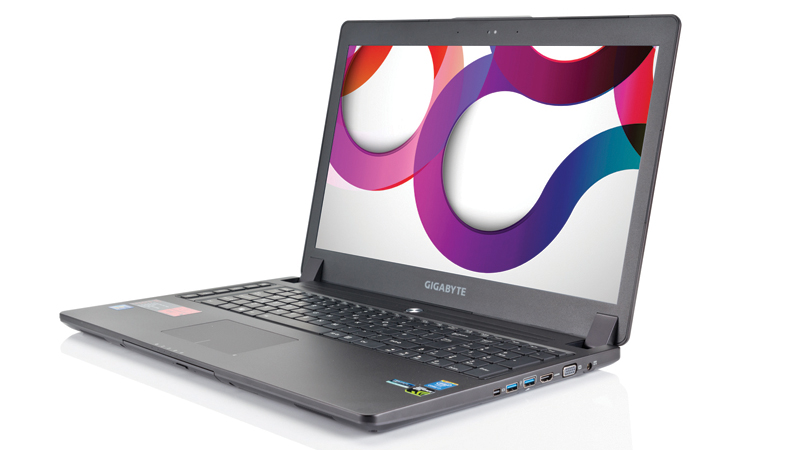 The Gigabyte P37X is built for gaming speed, based on a large 17-inch display chassis but in a thinner than traditional case. With the help of the best single-chip mobile graphics processor currently on the market it can play any game you want, up to very high rendering quality. It may not stand out in style but it gets the job done, albeit at a high price.

With the best single-chip mobile GPU on the market, this power laptop is built for speed. We review the Gigabyte P37X  gaming laptop. Also see:  Best gaming laptops 2015.

Standing at the top of Nvidia’s latest GTX 900 Series of mobile graphics processors is the GeForce GTX 980M. Gigabyte has taken its huge 17-inch P37X as the vehicle to carry this mighty mobile graphics engine.

Unlike its sub-brand of Aorus which apes Alienware in style and design, the Gigabyte P37X takes more typical Windows laptop construction, pure plastic all the way, sober black all over. Corners are gently radiused though and the finish is more satin than total matt.

The industrial design is unremarkable, and without the Gigabyte name stencilled on the screen bezel there’s nothing to indicate from which Taiwan factory this chassis originated. In its favour it’s not as brutally ugly and generic as the Clevo off-the-shelf chassis favoured by PC assemblers like Schenker/XMG; but the point for some gamers for these gaming laptops is to focus the bill of materials on the essential GPU and CPU to get the job done.

However it does manage to stay reasonably trim, given the screen size. At 23.2 mm, it’s a couple of millimetres under an imperial inch, and its 2.9 kg mass stays the right side of the shoulder-tilting three-kilo mark.

The P37X features a 17.3-inch IPS display from LG/Philips, with 1920 x 1080 pixel resolution. While there are very good arguments for not increasing resolution beyond full-HD for Windows and/or gaming purposes, it does result in a lower pixel density on the stretched panel – around 127 ppi, where a 13-inch has much sharper 166 ppi – which does mean rougher looking screen graphics than is now becoming standard in a retina-display world. See all  laptop reviews.

There’s a fair line-up of ports and connectors, including three video outputs – two digital through Mini DisplayPort and HDMI, and the old analogue standby of VGA D-Sub. There are four USB ports, but only the two on the right are USB 3.0. We struggle to understand how a modern laptop costing close to two grand can get away with fitting cheap and obsolescent USB 2.0 ports.

The keyboard is standard fare tiled type, here with short-action keys that provide a good typing experience. Helping to fill the wide top deck is a number keypad to the right and a row of six programmable macro keys labelled G and G1-G5 on the left. A white LED backlight can be triggered from Fn+Spacebar. It has two brightness levels and like many others suffers from distracting light bleed around the side of the keys. Some flex in the keyboard area is evident when you press down in the centre of the top deck.

We found the ELAN trackpad to be ‘sticky’ in operation, with a tardy cursor that needed care steering. Another issue was flakey Wi-Fi connectivity, where the laptop would routinely disconnect from our test router and require a restart to see any available networks.

The underside features an array of random stickers, screws and venting grilles, with one hatch in the centre to give easy access to the system memory.

Operating noise levels were variable, with fans sometimes revving up while the laptop was simply idling at the desktop. Under gaming load fan noise was relatively loud but no worse than most of the breed.

On main processor duty is the popular Haswell-generation quad-core from Intel, the Core i7-4720HQ clocked at 2.6 GHz and with another gigahertz of clock speed available in Turbo mode. There’s 16 GB of 1600 MHz memory on two SO-DIMM cards. Also see:  Best laptops 2015.

For internal drives, Gigabyte offers the useful facility of a fast flash drive as C drive, and a large capacity 2.5in hard disk for 1000 GB of bulk storage.

The boot drive consists of two 128 GB mSATA SSDs, configured in RAID 0 to work around the SATA speed ceiling. This gives a total capacity of 256 GB (238 GiB, as reported by Windows). In our tests we measured up to 832 and 654 MB/s for sequential reads and writes, while 4 kB random reads and writes also stormed through, indicating peak input/output operations per second at a blistering 132, 000 IOPS with queued 4 kB random writes.

The Nvidia GeForce GTX 980M established itself as able to render all of our games tests with consumate ease. And with a huge 8 GB of video memory included, this GPU should be capable of driving external high-resolution displays with ease too.

Even with Batman: Arkaham City set to maximum detail settings at screen native full-HD resolution it could average 91 fps. Tomb Raider 2013 in full-HD and High quality zipped along at 221 fps, falling to a 77 fps average only after setting it to the highest Ultimate rendering.

In our tests we measured up to 620:1 contrast ratio; and a colour gamut that could render 92 percent of the sRGB range and 71 percent Adobe RGB. Colour accuracy was good, with an average Delta E figure just over 1.0.

Unplugged runtimes on the biggest 17-inch laptops is very rarely more than a couple of hours, despite the opportunity for fitting much larger battery packs. But we were pleasantly surprised to find the P37X could run for over four hours (4 hr 02 min) in our standard looped video test. See  all laptops buying advice.