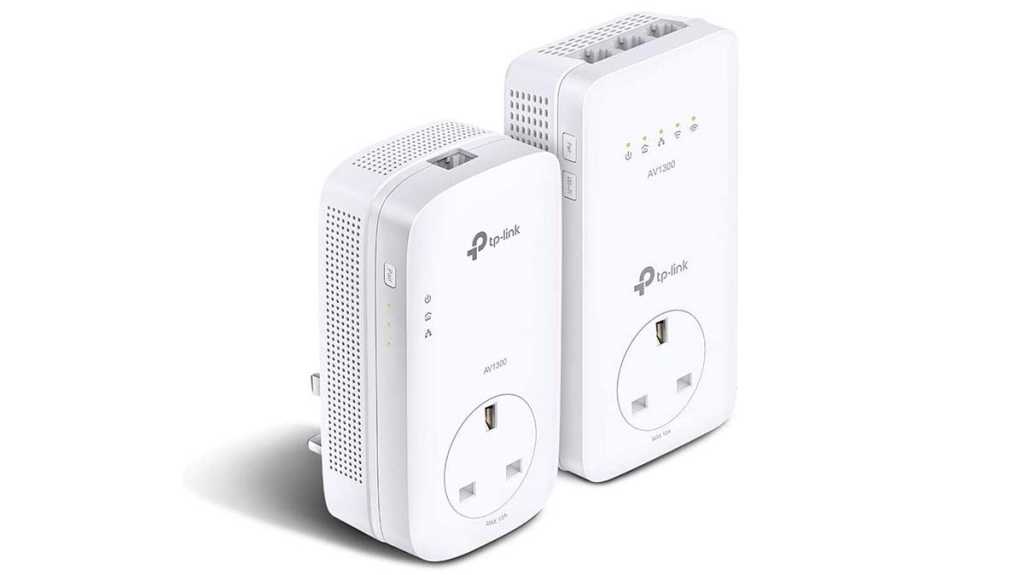 The TP-Link AV1300 Gigabit Powerline Adapter Starter Kits (TL-PA8033P KIT and TL-WPA8631P KIT) match their rival Gigabit Powerline adapter sets in our real-world speed tests. If your home Wi-Fi is patchy in distant rooms, it is probably worth paying the extra for the Wi-Fi-enabled WPA-8631P KIT.

Powerline is an incredibly easy way to set-up your own speedy home network. Here we review the TP-LINK AV1300 Gigabit Powerline Adapter Starter Kit, which is one of the fastest we’ve tested.

There are two models available, both with a generous three Ethernet ports on the second-room adapter, and passthrough sockets on both. The TL-PA8033P KIT doesn’t include the ability to create an extra Wi-Fi hotspot but the TL-WPA8631P KIT does.

Don’t be scared off by the product names and numbers. TP-Link doesn’t make this part easy, but the actual setup is a breeze, and all will be explained!

Why do you need a home network? Most of us nowadays have either a smart TV, Sky, Apple TV, PC or laptops, games consoles, or Tivo DVR. Or all of the above. These come with Ethernet ports on the back so you can get super-speedy wired Internet connections for catch-up TV, over-the-internet gameplay, or Web access. Read more on What is Powerline and read our Best Powerline Adapters round up.

Your Internet router/modem is usually in a different room to all these digital home entertainment devices. And who wants to stretch ugly Ethernet cables all over their house?

Even better, if your home Wi-Fi is fading in certain rooms a distance from your wireless router, a Powerline that is Wi-Fi enabled can create a strong Wi-Fi hotspot in the room with the second Powerline adapter.

Set up is a breeze on just about every Powerline we’ve tested, and TP-Link’s AV1300 Gigabit Powerline Adapter Starter Kit is no exception. It really is Plug & Play. No need to install software or configure your settings.

In our tests the Gigabit Powerlines do indeed trump the older Powerlines, but not by doubling the speed.

And even the Gigabit 1,300Mbps Powerlines are unlikely to hit the theoretical max speed of the slowest.

Powerlines might be classed at 1,300Mbps but the fastest we’ve managed to get in a real-world environment is about 115Mbps. There are so many factors slowing down data transfers on electrical wiring that the reality is much less impressive than what’s printed on the box.

Don’t worry, this is plenty fast enough to boost your catch-up TV downloads. Just don’t believe the promised speeds on the box—this is true of all Powerline products, so at least it’s an even playing field.

There are two models of the TP-Link AV1300 Gigabit Powerline Starter Kit, each containing two adapters. The starter kit, the TL-PA8033P KIT, is pictured above (with UK plugs but adapters will have local plugs depending on where you purchase). It features one Gigabit Ethernet port on the base adapter that connects to your router, and three Gigabit Ethernet ports on the second-room adapter. Handily both adapters feature passthrough sockets to save you from losing one at the wall socket when the adapters are plugged in. It costs £69.99 in the UK. We’ve seen this a little cheaper at Amazon.

There is also the TL-PA8030P KIT with three Gigabit Ethernet ports on each adapter—although this model is being discontinued, you can still find it at Amazon.com in the US.

We do two tests on Powerline. One is not very real-world but is tested in a house. We put both Powerlines on the same wall power socket and transfer a large file from one computer to another.

On this test, the TP-Link AV1300 equalled our previous top speed of 410Mbps, by transferring a 1GB file between PC and laptop in 20 seconds.

But a more realistic test is with the second Powerline adapter a couple of floors away from the first one that’s connected to the router.

In this tougher test the TP-Link AV1300 managed just over 100Mbps, which is only slightly slower than the other Gigabit Powerlines we have tested: the uglier but cheaper Solwise SmartLink 1200AV2 (107Mbps) and larger but more costly Devolo 1200 (104Mbps).

Every house is different so you may well get faster speeds than this, but we test all Powerlines in the same house for comparison purposes. Even then, speeds vary quite a lot depending on multiple factors. For example, Powerline speed is also heavily affected by what else is using your home writing at the time. Battery chargers and microwaves will noticeably slow Powerline speeds.

The TP-Link AV1300 Powerline Starter Kit is subtle in white but larger than many adapters as they feature their own power socket on the front—which is helpful as it means you don’t give up a valuable socket by using these adapters. There is also evidence that using this Passthrough socket can eliminate some of the electrical noise mentioned above.

The Ethernet ports are at the top of the adapter, which is handy if your power sockets are close to the floor line.

The base adapter connects to your router and so requires only one Ethernet port. This is actually a unit called the TL-PA8010P but it’s the adapter in the second room, with three Ethernet ports, that the starter kit takes its name from.

The best value multi-port adapter kit is the £69.99 TL-PA8033PKIT that has three Gigabit Ethernet ports on one of the adapters, which you may well find is handier if you have multiple smart devices that demand fast Internet connections. This is not yet available in the US, but there you can buy the $99.99 TL-PA8030PKIT that has three ports on each adapter.

The TL-WPA8631P KIT features the ability to create an extra Wi-Fi hotspot in the second room, which usually boosts wireless speeds for your smartphones, laptops and tablets. In our real-world tests this new Wi-Fi hotspot linked at a 90Mbps speed, which is not so far off the wired speed and one of the best we’ve seen. It is more expensive though so only consider this if your house suffers from weak wireless connections.