Objectively, the Surface 3 is the best compromise between a laptop and tablet. It’s a highly portable gadget which can run full Windows programs and it costs less than the Surface Pro 3. It’s not exactly cheap by the time you’ve added the keyboard and stylus, though. It’s also only good for lightweight duties – it’s less powerful than laptops costing the same – and some people will find the screen is too small for ‘proper’ productivity. It’s a better work tool than an iPad and Bluetooth keyboard, it has to be said, and if you only need to use office apps and a web browser, it could be exactly what you’re after. Most people are better off spending more on the Surface Pro 3 or, if you don’t need a touchscreen, a Core M laptop such as the Asus UX305F.

With full Windows 8.1 and a lower price than the Pro version, the new Surface 3 could be the laptop / tablet hybrid you’ve been searching for. Here’s our Surface 3 review. See also: best budget laptops you can buy in 2015

Microsoft managed to keep the Surface 3 launch under wraps, so it was a surprise when it was announced at the end of March. Given that the Surface Pro 3 was the first such device we were able to recommend buying, a cheaper version should surely be good news…

The Surface Pro 3 is a great feat of engineering, but not everyone needs the power of a Core i7 for browsing the web, sending emails and creating documents in Office 365. So a Core M-based tablet running full-blown Windows 8.1 (rather than the hamstrung Windows RT) is what we’d been waiting for.

Unfortunately that’s not what we got. Instead, there’s an Atom x7-Z8700, the first Cherry Trail processor to be seen in a tablet. It’s a quad-core part, running at 1.6GHz but capable of boosting up to 2.4GHz when necessary.

There’s also a microSD card slot for adding more storage, but with a full-size USB port, you can easily connect USB flash drives and hard drives for almost unlimited storage. 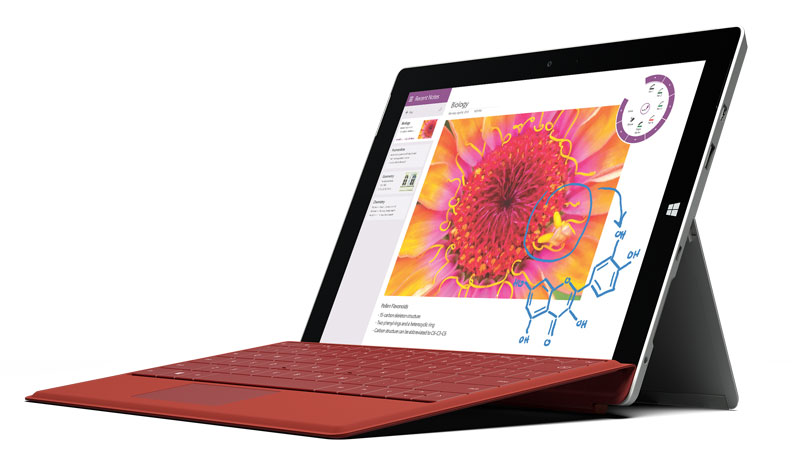 One of the great things about the Atom processor is that it doesn’t require a fan for cooling which means the Surface 3 is completely silent. Since that’s what we’ve all come to expect from a modern tablet it’s not a unique achievement by any means, but it’s still welcome one.

The casing is made from the same magnesium as the Pro version, without the vents around the edge. Microsoft says it could have made the Surface 3 thinner, but chose not to in order to leave enough room for the full-size USB 3 port.

There’s also a microUSB port: another welcome feature as it means that you can charge your Surface 3 with any USB charger and microUSB cable. However, you’re best off with the bundled power supply which delivers 2.5A (or 13W) and charges the tablet much faster than a phone charger can.

I’m a big fan of the front-mounted stereo speakers which you can hardly see in the screen bezel. They sound better than you’d expect, mainly because they’re not shooting sound away from you like most tablets do with rear-facing speakers.

Unfortunately you don’t get the same infinite-position kickstand as the Surface Pro 3. The baby Surface clicks into three positions, the first two being the same angles as the Pro 3, and the third giving much more of a lean – ideal for sketching or annotating. 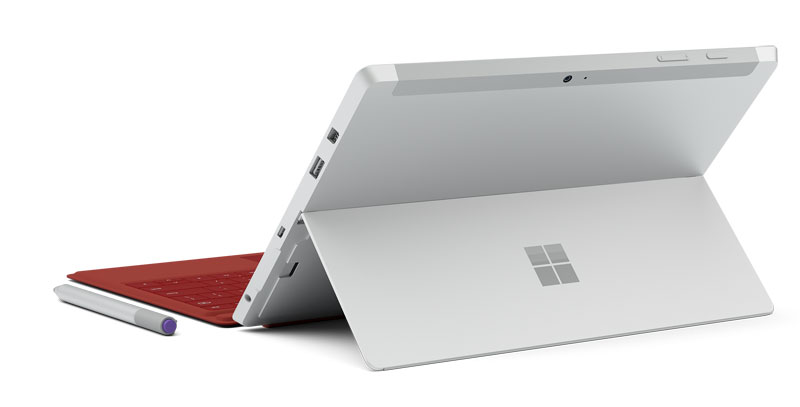 One of the biggest attractions of the Surface Pro 3 is its larger screen: 12.1in versus the 10.6in of the Surface Pro 2. It’s still small by laptop standards, but just big enough to be usable for productivity and strike a good balance between size and portability.

The Surface 3’s screen is a step backwards, though. At 10.8in, it’s smaller than any laptop or Chromebook. Microsoft has changed it to a 3:2 aspect ratio which makes the tablet nicer to use in portrait mode than 16:9 Surfaces as it’s closer to the aspect ratio of paper. And since you can use the Surface Pro 3 pen with the Surface 3, those who want to draw or write will appreciate the more pad-like dimensions.

The resolution of 1920×1280 equates to a pixel density of 214ppi. That’s not particularly high, but if anything I’d prefer a lower resolution on a display of this size. Usually I’d say the opposite, but Windows doesn’t scale well and at the default text size everything is tiny. If you’re used to using Windows on a large or low-resolution screen, adjusting to the Surface 3 can take some time.

Having swapped my 15.6in office laptop for the Surface for the duration of the review, I’ve come to the conclusion that it’s possible to use a 10.8in screen for work. It’s just not that pleasant.

Microsoft says there are several reasons for making the Surface 3 smaller: to offer more choice, to give better battery life and to make it cheaper.

So if you were hoping for a less powerful, cheaper Surface Pro 3, bad luck. This is arguably a better Surface 2 which can run legacy Windows programs, but it’s not an alternative if you had your heart set on a 12in screen. Here are the two side by side:

Another cost-cutting measure is the fact that you no longer get the pen in the box: it’s a £45 option. As we said in our Surface Pro 3 review it’s a wonderful gadget. Tap the button on the end and OneNote will launch even if the tablet is in standby. A double-press takes a screenshot, after which you can draw a marquee to save only the portion you want and then annotate it before quickly sharing it.

Some people may not want the pen, so they’ll save money but selling the Surface 3 without the keyboard makes even less sense than with the Surface Pro 3. Yet again, it’s an option but no sane person would buy a Surface 3 and exclusively use the on-screen keyboard. The only reason you’d consider a Surface over, say, an iPad Air 2 is because you want Windows. And Windows programs generally work best with a keyboard – not a fingertip.

It wouldn’t be as much of an issue if the keyboard in question didn’t cost £109.99, because without it, the Surface 3 is just a mediocre tablet. The keyboard may be backlit and come in a choice of colours but this bumps up the price of even the base model to £530. If you don’t already have pen and need one, this takes it to £575.

If Microsoft wants to offer more choice, a non-backlit keyboard would be a nice option to have, along with a £55 price tag. Better still, of course, would be to bundle a keyboard with the device.

At least it’s a decent keyboard. Like the Pro’s it has a double hinge with a small section that’s held against the screen bezel by strong magnets. This give the keyboard enough of an angle for comfortable typing. Some people will find the keys too small, but as someone with smaller hands, I found touch typing was relatively easy. Only on the very odd occasion did a key fail to register.

When you don’t need a physical keyboard you can either fold it behind the Surface or rip it off completely. On its own the Surface 3 weighs 622g and feels significantly lighter than the 800g Pro 3. However, it’s still much thicker and heavier than many tablets. Although its screen is over an inch smaller, the iPad Air 2 weighs almost 200g less and is nearly 3mm thinner.

And with the same palm-blocking technology as its big brother it’s comfortable to lean on the screen as you write with the pen.

There’s no doubt that the Surface 3 has a good screen. It’s an IPS panel that’s bright and has good viewing angles. Being glossy, it’s still highly reflective and not much use outdoors.

In our tests it managed to produce the same gamut (range of colours) as the Surface Pro 3’s screen with 90 percent of sRGB and 69 percent of the tougher Adobe RGB test. For colour accuracy, the smaller screen is slightly better than the Pro model, with a Delta E figure of 1.08, against 1.5 of the Surface Pro 3.

Despite being the most powerful Atom processor available the x7-Z8700 is no powerhouse. It’s fine for light duties (including basic photo editing) and we found it zipped along even with several tabs open in a web browser, plus Word and Excel running alongside.

It doesn’t take much to find the limits, though. Switching between applications takes longer than most average laptops and you won’t want to wait the extra time it will take to apply complex effects in Photoshop compared to the Surface Pro 3. We wouldn’t recommend a Surface 3 for video editing, either.

In the PCMark 8 Home test we saw a result of 1383 without hardware acceleration. This compares poorly with the Core M processor in the Asus ZenBook UX305F which scored 3424. In the Work section, the Surface could manage only 1557, while the UX305F scored 3312.

It’s a shame Microsoft went with the Core M instead of the Atom.

Batman: Arkham City refused to run, citing an “unhandled exception”, but we did manage to get Tomb Raider going. When set to the usual start-point setting of 1280 x 800 and Normal detail the Surface 3 averaged 15fps. Dropping the resolution to 1024×768 and Low detail saw an increase to 28fps. Again, the Core M shows its prowess here with a score of 31fps at 1280×800. With a few tweaks, it’s possible to get smooth frame rates on the ZenBook, but you have to sacrifice too much on the Surface.

We test tablet battery life by playing an HD video on loop from our Synology NAS, first setting the screen brightness to 120cd/m2. The Surface 3 lived up to Microsoft’s claims by lasting just over 10 hours before needing a recharge.

There are front- and rear-facing cameras, the former having 8Mp and the latter 3.5Mp. The front camera is perfectly good for Skype chats, and the rear delivers acceptable photos in emergencies, but I can’t imagine many people feeling comfortable holding up such a large device whenever they want to take a snap.

A small incentive to buy a Surface 3 is that you get a year’s free subscription to Office 365 Personal, which would otherwise cost around £60.

The disadvantage, common to all Windows tablets, is that Windows 8 is the least good mobile OS. If you were planning to use the Surface mainly as a tablet, you won’t enjoy it as much as an iPad or Android device. Part of the issue is the interface which isn’t as slick or intuitive, but a bigger problem is the apps. Even when you can get the one you want, it’s usually inferior in quality or features (or both) to the iOS or Android version.

While we were testing the Surface 3, Maroo sent over its brand new Surface 3 Folio to try out. We mention it because your options are severely limited if you want a case specifically designed for the Surface 3, and the cases are sold directly from Microsoft’s website alongside the tablet.

Sure, you can buy a generic sleeve (Maroo also makes these for the Surface 3) but with the Folio you can protect your tablet and keyboard. Like previous Surface cases from Maroo, you can’t use the tablet’s kickstand, so the Folio has a built-in stand which flips out to around 40 degrees. It adds a fair amount of weight, which is a disadvantage, but it’s not outrageously expensive at £39.95. It’s made from synthetic leather and a woollen material. 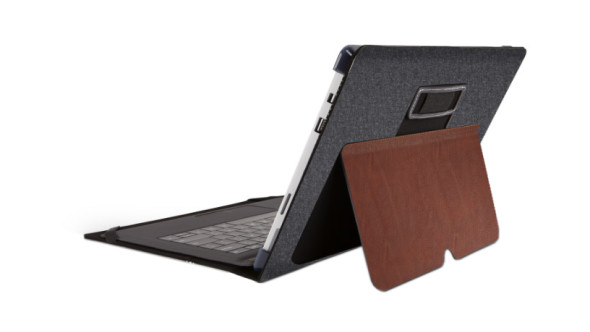