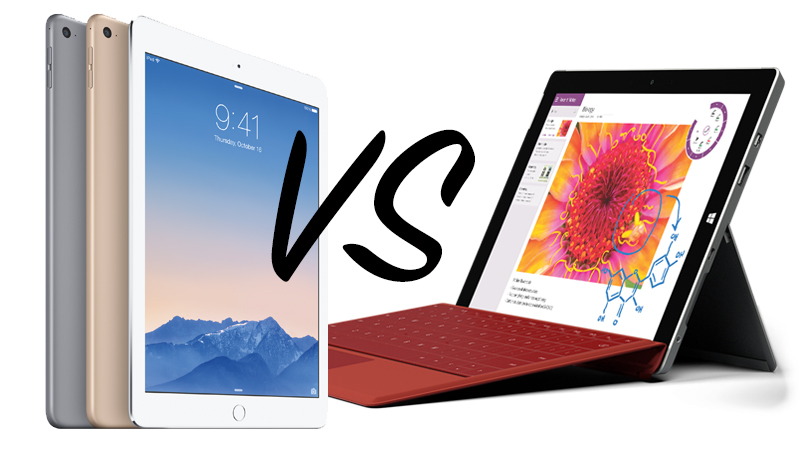 Overall, the Surface 3 and iPad Air 2 are very different devices, and deciding between the two is all going to depend on what you plan on using your tablet for. It’s difficult to beat the iPad Air 2 when it comes to design, portability and its user interface, but there’s no split-screen mode, and you won’t be able to get full versions of desktop applications to help with your work. That’s where the small but powerful Surface 3 comes in, offering full apps, split screen, an excellent keyboard and pen (though they come at an extra cost) and lots of power that’ll mean working on presentations, essays, designs and more while out and about has been made possible without needing to lug around a laptop.

The Surface Pro 3 was unveiled by Microsoft in May 2014 as a device that can replace both your laptop and your tablet. Now, a new model of the Surface has arrived, this time simply called Surface 3. It’s an all-new, more affordable option for potential Surface customers, bringing it more in line with Apple’s flagship tablet offering, the iPad Air 2. Here, we put the two head-to-head in our Surface 3 versus iPad Air 2 comparison.

The Surface 3 is the newer of the two tablets, and was only announced on 31 March and is set to come out in the UK on 7 May. It starts at £419 for the base model. Here’s a break down:

Microsoft said that we can expect 4G LTE models to launch later in the year, but we haven’t got pricing or an exact release date for those yet.

The iPad Air 2, on the other hand, has been on sale since October 2014, and is widely available to buy from Apple in the UK.

Both the Wi-Fi only and 4G LTE models are available, and the pricing is as follows:

As you can see, the prices of the two tablets are similar at the lower end, with the difference between the directly comparable models coming in at £60, with the iPad Air 2 the more expensive of the two.

But, it’s worth noting that the Surface 3 doesn’t come with the keyboard included, and a huge part of its appeal stems from the keyboard and its ability to reduce the need for you to carry both a tablet and a laptop with you if you want to work on the go.

And that keyboard doesn’t come cheap. It’ll cost you £109.99, so realistically you’re looking at an overall price of £529 for the base model of the Surface 3 with the official Type Cover keyboard included.

Apple is renowned for its sleek, stylish products, and the iPad Air 2 is no exception. It’s incredibly thin at 6.1mm, and light at just 437g.

That’s compared with the 8.7mm thick, 622g Surface 3 (and don’t forget to add the 4.9mm and 265g of the keyboard), so there’s some significant extra weight and bulk to think about there, but it’s not going to break your back if you’re carrying it around in your backpack. It’s a price that many will consider worth paying to get that extra power and fully-fledged Windows applications.

And the Surface 3 is not ugly device. Aside from the slightly thicker than we’d like bezels, it’s easy on the eye and is a well-built, top quality tablet. It is a little blocky for our liking, particularly when you compare it with the soft, rounded edges of the iPad Air 2, but it seems to suit the business-minded purpose it’s designed for.

Plus, the built-in kickstand on the rear is great, with three angles to choose from making it particularly when used for typing in conjunction with the Type Cover. There’s no such stand in the iPad Air 2.

Both tablets have metallic chassis, but the Surface 3 is only available in a silver finish, while the iPad Air 2 comes in silver, space grey and gold.

Onto that display now, and the Surface 3 offers a 10.8in display, while the iPad Air 2 has a 9.7in display.

The Surface 3’s screen is good, but the iPad Air 2 beats it with its higher-resolution. If it’s more screen estate you’re looking for, that extra inch will make a surprisingly big difference, particularly if you plan on using the tablet for business more so than pleasure. But for playing games and watching movies, the iPad Air 2 is crisper and clearer.

This is where things start to get really interesting, because the Surface 3’s specs are quite different from the iPad Air 2’s, setting it apart from the rest of the tablet market as more of a tablet/laptop hybrid with internal components as powerful as some of the laptops available to buy right now. Plus, it means it’s capable of running a full version of Windows 8, meaning you can install and use any Windows apps on the tablet including full versions of Microsoft Office and Adobe Creative Cloud apps including Photoshop.

We haven’t yet managed to run our full tests on the Surface 3, but we do know its specification. You get a quad-core Intel Atom x7-Z8700 processor (2MB Cache, 1.6GHz with Intel Burst technology up to 2.4GHz), and that’s paired with either 2GB or 4GB of RAM depending on what model you choose, as described in the price and availability section.

We expect performance on par with a budget laptop: perfectly fine for productivity and communications. It’s unlikely to be enough power for high-end video- and image-rendering tasks, though – for that you’ll want to take a look at the Surface Pro 3.

Storage options are 64GB or 128GB SSD, and there’s also a microSD card reader for additional storage. Connectivity options are excellent, with Wi-Fi 802.11ac, Bluetooth 4.0, and setting it apart from the iPad Air 2 and most other tablets, a full-size USB 3.0 port and a Mini DisplayPort for connecting it to a bigger screen or monitor.

There are stereo speakers with Dolby audio, there there’s also a set of sensors including an ambient light sensor, a proximity sensor, accelerometer, gyroscope and magnetometer.

The iPad Air 2 doesn’t quite live up to the power of the Surface 3, but it’s no slouch either. Inside is Apple’s speedy A8X 64-bit processor, paired with an M8 motion co-processor that handles the sensors.

Audio features aren’t great – there’s just one speaker that runs along the bottom of the iPad Air 2.

We’ll update this comparison with benchmark test results as soon as we have them to find out just how much more powerful the Surface 3 is.

On the rear, the iPad Air 2’s iSight camera can capture 1080p vide and is 8Mp, matching the rear-facing camera on the Surface 3.

The Surface 3 is available with an optional stylus called the Surface Pen, which connects to the device via Bluetooth to offer a speedier way of completing some tasks and taking notes. However, it’ll set you back £44.99.

As mentioned above, the Surface 3 runs a full version of Windows 8, enabling you to download and use any Windows application.

The iPad Air 2, on the other hand, runs Apple’s iOS 8 mobile operating system, and apps are available through the dedicated iOS App Store. That means slimmed down versions of Adobe’s Creative Cloud apps, and mobile versions of Microsoft Office.

The benefit of iOS, though, is that it’s completely designed with the iPad in mind, whereas there are some elements of Windows 8 on the Surface 3 that are tiny, and difficult to use on a 10in touchscreen, particularly if you’re using your fingers rather than the Surface Pen.