The Microsoft Band is the most Microsoft product imaginable. It does useful stuff. And mostly it does that stuff well. But it is ugly and uncomfortable and no-one is ever going to point at a Microsoft Band and say ‘I want one of those’. Which is a shame, because having used it for a while – and despite issues with battery life and distance measurement – I like it and will probably keep using it. Whether that is enough to make people drop £169 inc VAT to get one when they can buy an Android Wear watch for an additional £100 is the key question. I suspect they won’t.

Microsoft Band review: what it is

The Microsoft Band is Microsoft’s activity tracker with smartwatch capabilities. Rather than a direct rival to the likes of the Apple Watch and the best Android Wear devices, the Microsoft Band is like a FitBit with benefits. As well as being a full featured pedomiter, health monitor and activity tracker, it works with just about any smartphone and allows you to preview texts and emails. And it is a digital watch.

As such the Microsoft Band may in fact be a true rival to the Apple Watch and its rivals. After all – it is unproven that people actually want a smartphone on their wrist. Taking photos, making calls: it is impressive that you can do these things from a watch, but arguably not desirable to do so. It is at least possible that the Microsoft Band’s feature set is the perfect blend of convenience and portability, on a device that can be worn with your existing watch. Possible. (Find out more here: Microsoft Band vs Apple Watch comparison.)

Of course, that requires for the Microsoft Band to be good, and good value. And without giving too much away, right out of the box the Microsoft Band is a very ‘Microsoft’ product. It has great functionality, but is ugly and clunky. Although not without charm.

So I tried out the Microsoft Band over the course of a long weekend and a few days at work. What follows is my in-depth Microsoft Band review. (For more on this subject, see: 14 best smartwatches and wearable tech 2015 UK.)

Here’s where we first run into problems. As I mentioned above, the Microsoft Band is the epitome of Microsoft in that it is conceptually smart, has a solid and functional feature set, but is ugly and uncomfortable. Say what you like about Apple (and personally I feel that the Apple Watch is something of a joke that has gone too far), but Apple would never release a product like the Microsoft Band. 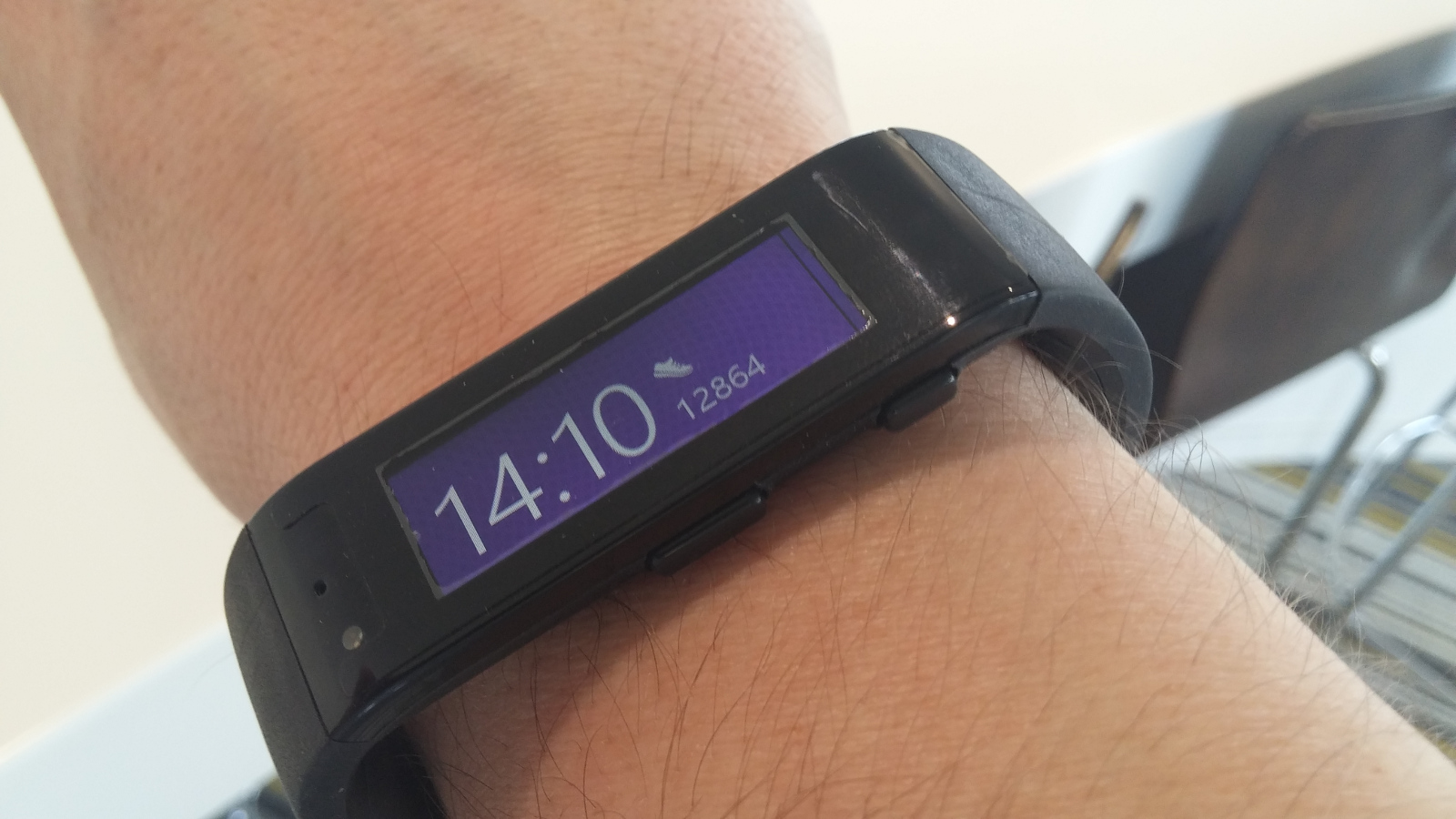 For a start, it is big. Big and chunky. The band itself measures 19mm wide and 9mm thick, and it weighs 60g. That is a lot of device to wrap around your wrist. The strap of my actual wristwatch is around half as thick at its chunkiest part. Even the watch itself is about the same width as the whole of the Microsoft Band.

And there is another issue. The Microsoft Band is basically rigid. Moreover, the back of the display is roughly 5cm of straight-edged, rock-hard computer. I credit Microsoft with creating the Band in three different wrist sizes. I expect everyone will find one that fits. But even when it fits it doesn’t fit, if you see what I mean. I found that the straight edge rubbed against the bony bit of the top of my  wrist, and moved around whenever I exercised, even when the strap was pulled tight.

And the way the display itself fits is odd. It is a thin postbox of a screen, and the information is displayed in landscape mode. So you have to bend your arm (and neck) one way or the other to see the information onscreen. After experimenting with the Band on the top of my wrist and the underside, and in both orientations on both, I ended up with the buttons pointing back toward me. But it is a far from perfect experience.

So much for the user experience, it is also fair to say that the Microsoft Band does not scream out ‘desirable gadget’. It’s entirely unscientific, but not one person who saw my Band had positive things to say about it on style grounds alone. It looks like what it is: a big, chunky activity tracker. The display is a tiny sliver surrounded by big thick bezels, set into shiny black plastic that is pure function and no style. (See all wearables reviews.) 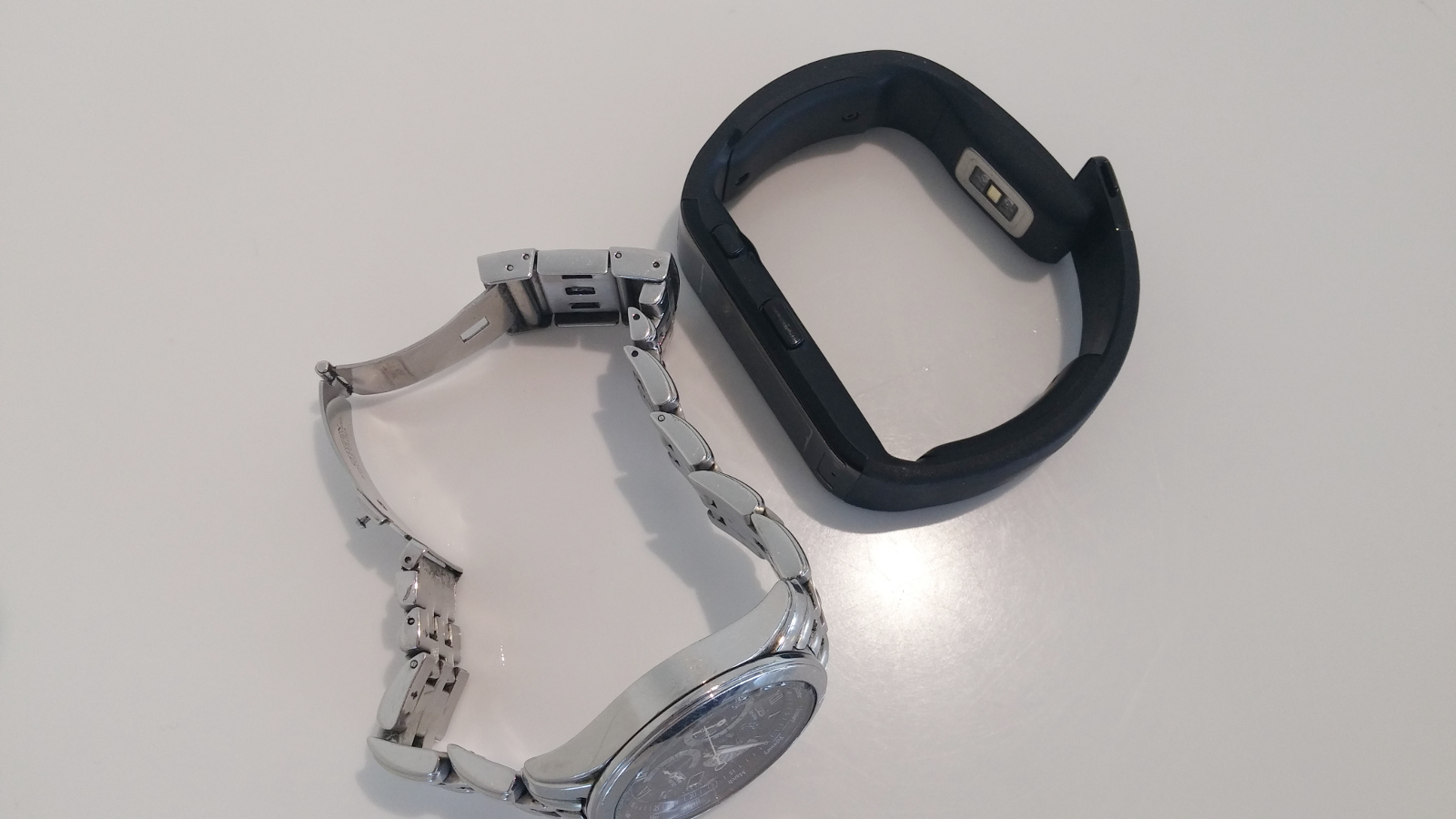 On the plus side it is well constructed, and robust. Made of thermal plastic elastomer, the band is both water and sweat resistant, and designed for extreme temperatures. We put it through multiple workouts in a variety of environments, and it never blinked.

But this is no gadget for posers. Or those who value comfort in their bony wrists.

In conventional terms we would describe this is a 0.2in display, but that doesn’t really help. In fact the Band has a 11 x 33mm touch-enabled TFT full-colour display. Once you work out how to access it, the screen is bright and clear, and the touchscreen is responsive.

Helpfully Microsoft has made the interface super simple, so that tiny display is perfectly adequate, even when on the move and with sweat running in to your fat piggy eyes (perhaps your experience is different to mine). The viewing angle is good. You can adjust the brightness to conserve battery life, and we have to say that we found the ‘Low’ setting worked perfectly well.

The display resolution is 320 x 106 pixels. The pixel density is high enough to not discern pixels – not least because we are not viewing photo or video on this display. 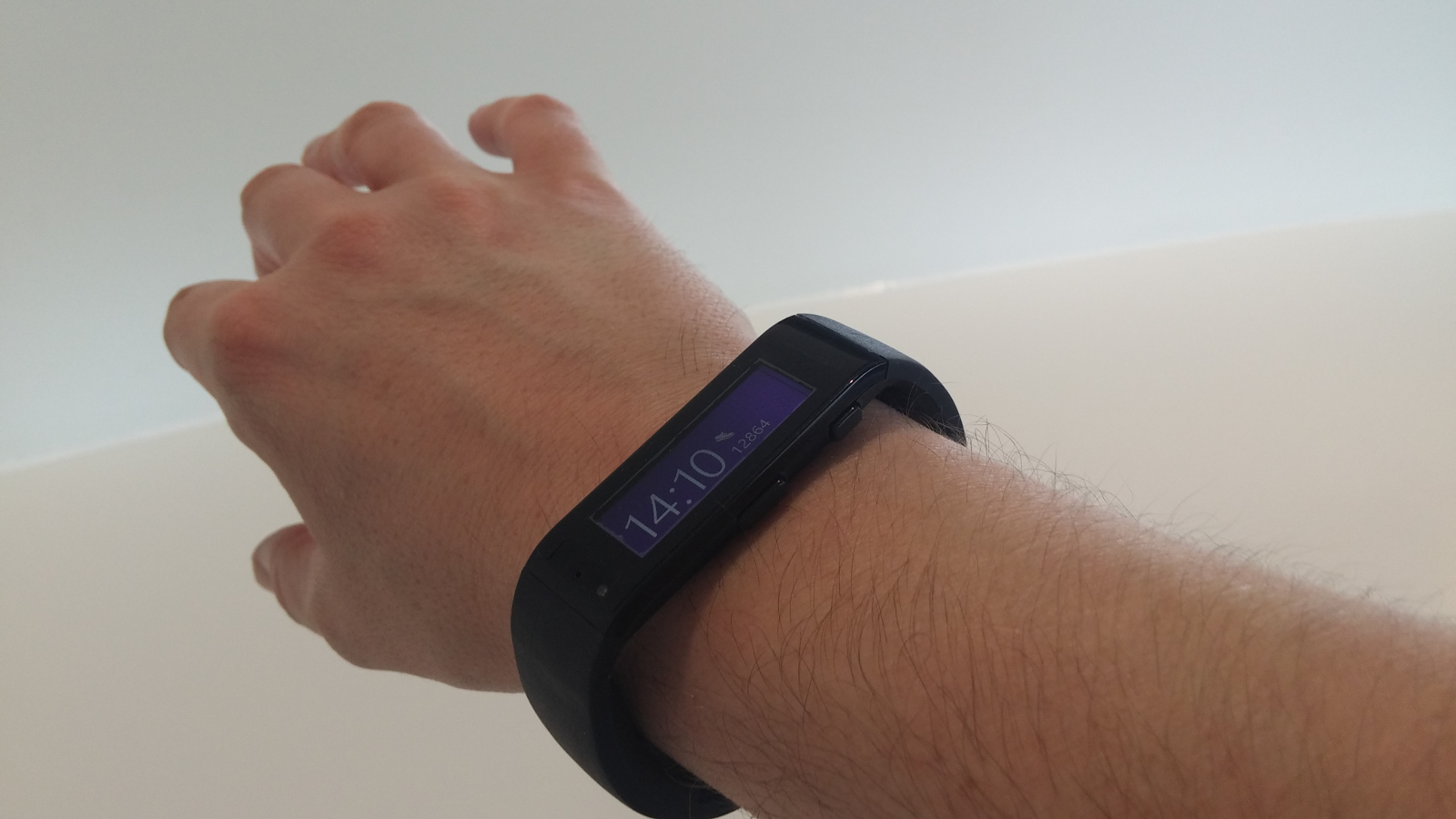 As an interface the display is aided by a haptic vibration motor that tells you when you have turned through a mile, or received an email. And there is a microphone in case you are the kind of maniac who likes to talk to your wrist.

So we like the Microsoft Band display. It’s not a smartphone display, but nor is it supposed to be.

The Microsoft Band is built around a ARM Cortex M4 MCU processor. There is 64MB of internal storage, although you won’t be saving photos or media files to it. It charges and connects via a USB-enabled cradle.

Sensors inlude an optical heart rate sensor, 3-axis accelerometer and gyrometer. You can use GPS to track your runs, walks and cycles, and an ambient light sensor, skin temperature sensor, UV sensor, and capacitive sensor all combine to measure performance in all kinds of activities. The heart rate sensor is continous, which makes it better than some.

We found that the GPS was very accurate when running and cycling, and the pedometer more accurate than most at calculating distance (with some caveats that we will outline below).

The Microsoft Band connects to your smartphone via Bluetooth 4.0. It’s compatible with Windows Phone, iPhone and Android (from Android 4.3 upward). We tried it with all three and it paired fine, although we were mostly testing with our LG G3.

We found general performane to be zippy with no discernible lag. And the sensors worked well, in general.

Here is the rub. For the record, you get two 100mAh rechargeable Lithium ion batteries. And Microsoft says that the Band should enjoy 48 hours of battery life. That really hasn’t been our experience. Yes, we are using it a lot, connected via Bluetooth, measuring a lot of activity. But I have never managed to get it through two days, even when the display is set to low. And when it goes, it goes.

On the positive side the Band charges really quickly via the supplied charging cradle cable – although you have to supply your own USB plug. But it does mean that if you want to use the sleep functionality as well as tracking activity, you may be in for a struggle.

As I mentioned at the outset, in principle at least the Microsoft Band includes a compelling feature set. Daily physical activity and sleep tracking, and 24-hour heart rate tracking and health monitoring. You also have built-in GPS and guided workouts.

You can preview incoming calls, texts, social media updates, emails and calendar entries. And, if you are the sort to use Microsoft’s Cortana, you can take notes and set reminders with it.

I expect that the principle reason for using the Microsoft Band is as an activity tracker with benefits. And for this purpose we are more than happy with Microsoft’s gadget.

By default it measures your steps each day, so you can set your target and walk off those pounds (or kilos – the Band can be set to measure both). We found it to be broadly accurate, as accurate (and within the same range) as the FitBits and Jawbones we have used. One potentially unique issue I had is that when I was out walking pushing a pram, steps simply didn’t register. At all.

Presumably this is because my wrist wasn’t moving. Reader: I have a six-week old daughter. Pram pushing is a big part of my life right now. 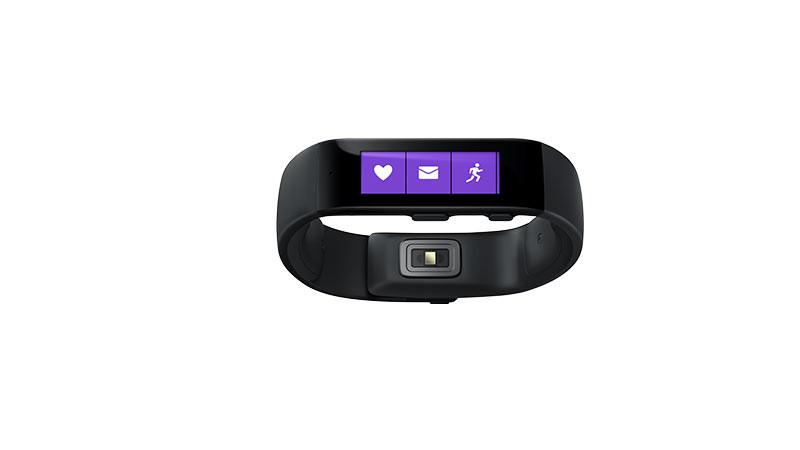 When you fancy more frenetic activity, by default you can just select running, cycling or weight training, hit the Action button and head off, and your activity is captured. You get helpful distance updates as you go.

We found the GPS tracked distance in the outside world pretty accurately, but when we were relying on the pedometer on a treadmill the activity tracker was poor (measuring three miles for a run the treadmill told us was more than five). This is not unusual or surprising, but mildly disappointing.

One great aspect of the Band as an activity tracker is that it can both set and measure your workout, involving both cardio and weights. Given that these devices are intended as psychological prompts to make you do more this can only be a good thing. And by measuring your heartrate the Microsoft Band is likely to have a more-accurate-than-some measure of the calories you burn. (For more on this subject, see: 14 best smartwatches and wearable tech 2015 UK.)

Microsoft Band review: as a smartwatch

We really like the Band as a smartwatch. Perhaps it lacks the full functionality of the Apple Watch or Android Wear, but as I mentioned at the outset that may be no bad thing. Functionality can be a personal thing.

I found that being able to preview emails and texts means that I look at my phone far less often. If I could add in WhatsApp and Facebook updates I could leave my phone in my pocket indefinitely. Perhaps Microsoft will add in such functionality. 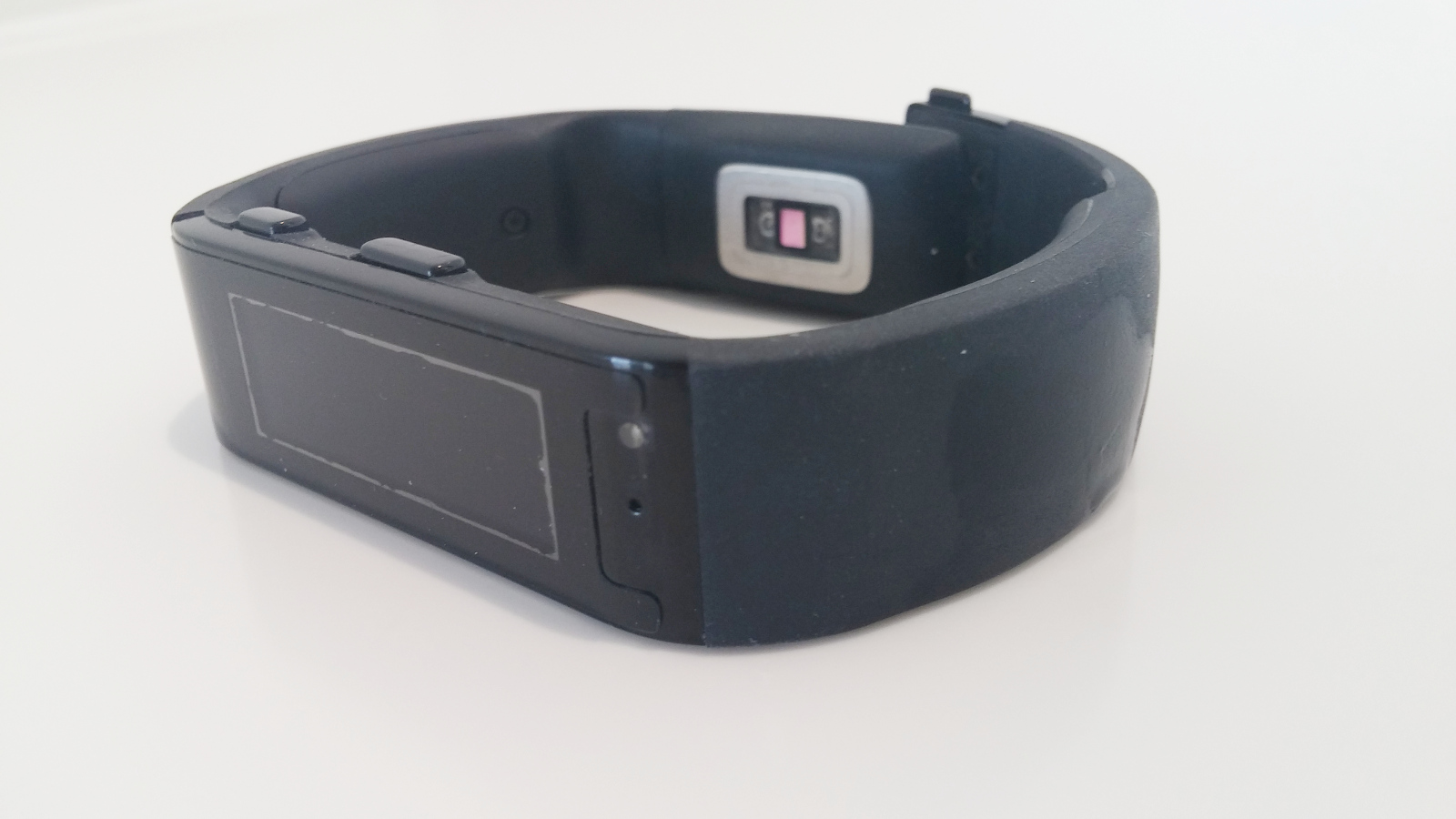 Being given a vibrating nudge that I have a meeting in 10 minutes helps me to be on time, too. As does being able to look at my calender without pulling out my phone.

The point is that I don’t want to be able to respond to emails and texts via a wristwatch. You can send templated texts from the Band, but for me just being able to triage and ignore until later most emails, texts and calls is a time saver. (Also a potential relationshop saver.)

The Band’s way of extending access to notifications on my phone offers useful additional functionality without compromising on my smartphone’s excellence as an input device. And that feels more useful to me than a full-featured smartwatch. But that is simply my personal experience. (See also: 20 best Activity Trackers 2015 UK.)