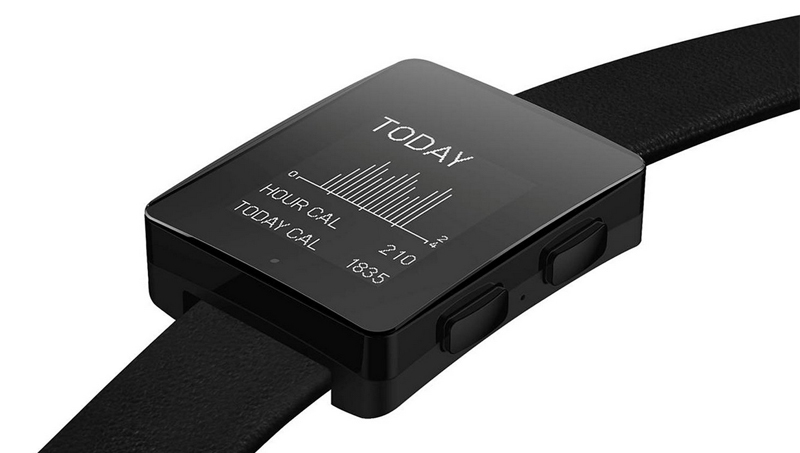 We love the Wellograph’s dressy looks and superb display graphics, but you do pay for these in terms of price compared to other more sporty wristbands. We did find the syncing to be a bit of a pain, and the battery tends to switch to watch-only mode even with noticeable juice to spare. We prefer a fitness watch to keep going till it or you runs out. As a very fancy, classy watch that tracks your exercise and heart rate the Wellograph is maybe more suited to the more affluent, fashion-conscious wearer rather than the sporty fitness fanatic. 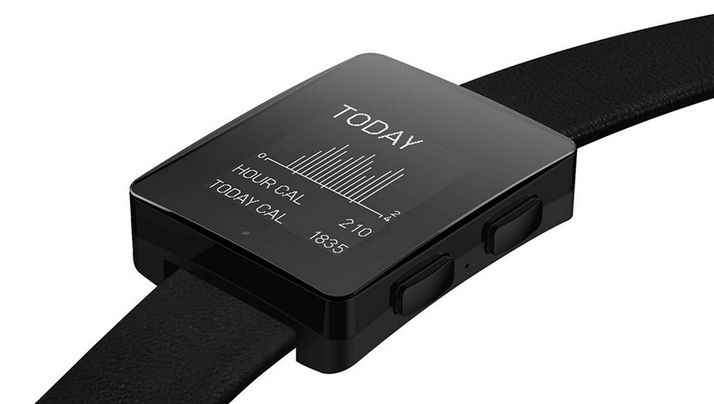 The Wellograph Watch is a classy looking activity tracker, stopwatch, pedometer and heart-rate monitor that rivals the Apple Watch in the design department, and has one of the best fitness-tracking displays we’ve seen on a smartwatch.

Wellograph might be smart to look at but it isn’t as clever smart as the Apple Watch. It has only the one app, and that’s focused on fitness. See Activity Tracker reviews.

The watch tracks steps with its 9-axis pedometer – that’s more movement sensors than its rival wristband the Fitbit Surge. But it lacks the Fitbit’s altimeter that measures your stair or hill climbs. The stopwatch helps you track distance, speed, lap times, and movement intensity.

An impressive four months of exercise sessions are stored on the Wellograph, and you can check these out through the equally good-looking app (compatible with iOS, Android and Windows Phone). See also: Best activity trackers 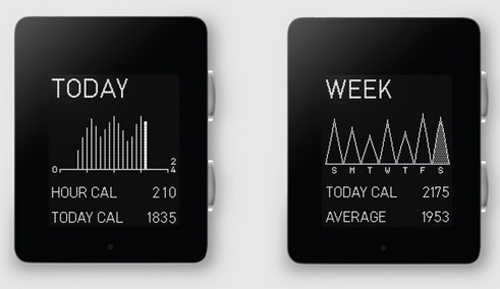 The Wellograph is a fantastic-looking watch, and doesn’t look out of place with even black tie. And its price is pretty premium too: about £215 in the UK, and US$299.

The Apple Watch is closest in looks, and is more expensive yet, starting at £299 (US$349). Its advantage over the Wellograph is the much wider selction of apps, but it suffers from poor battery life – at less than two days, it’s weak compared to the Wellograph’s 7-day battery.

The Wellograph’s front is made from sapphire crystal, which the company says is “virtually unscratchable”. This is the same face material as on the top two Apple Watch models. It has a machined stainless steel upper case with mirror polish finish. 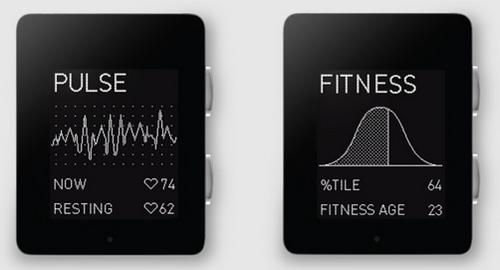 Some may find it a little too showy for jogging or working out, and sports wristbands such as the Fitbit Surge seem better suited for exercise fanatics. It doesn’t look like any other fitness tracker, except maybe the similarly sized Apple Watch.

Like the Wellograph watch itself the 1.26in display (168-x-144 pixels) is black & white, but very fine, and with an integrated backlight. It knocks the running socks off even the Fitbit Surge’s display (which looks clunky in comparison), with beautiful clock faces, activity graphs and animated pulse graphs. While it’s not as colourful as the Apple Watch’s Activity app it’s pretty enough in white on black.

You navigate via the two side buttons, and this is a bit clunky to begin with – we’d have preferred a more swipeable touch-sensitive display.

Packed with sensors the Wellograph is chunkier than most other trackers and even the Apple Watch. Occasionally this meant that it caught on cuffs, and makes it less comfortable to wear in bed. 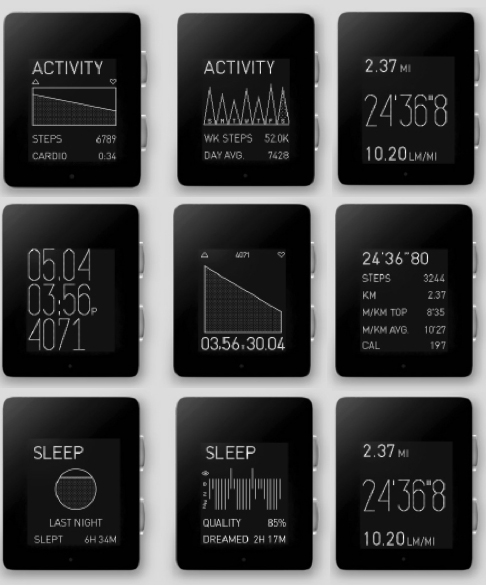 Some of the gorgeous Wellograph screen displays. 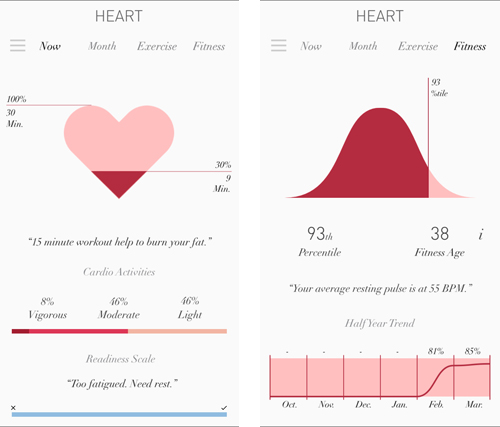 Fitness wristbands need to have heart-rate monitors these days, and the Wellograph’s works well. Its Tri-LED Heart Rate Sensor apparently replicates the action of a doctor using his fingertip to feel a pulse.

What makes heart-rate monitoring more than just interesting is the ability to gauge how hard your are exercising. Wellograph calls this Cardio Time, which can push you to go that extra bit harder in your runs and workouts.

It also measures heart-rate variability for assessing the effects of stress on your body, as well as preventing injury from overtraining. Wellograph calls this feature Readiness. 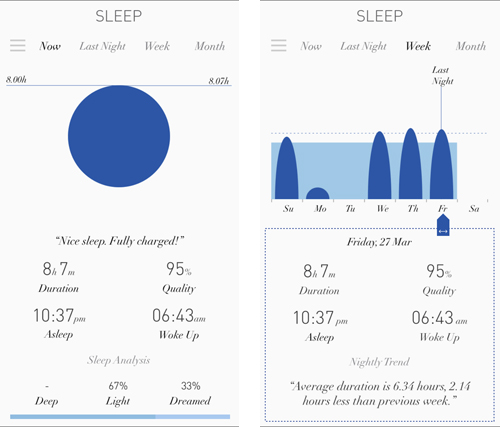 Like the Fitbit Charge HR and Surge the Wellograph automatically measures your sleeping patterns and tells you how you slept: sleep time, duration and waking. While the Fitbit wristbands are hardly noticeable at night the Wellograph’s chunkier, more watch-like design isn’t the most comfortable at wear to bed. My wife complained that it was too sharp when it touched her.

There’s no alarm function, which is a shame. 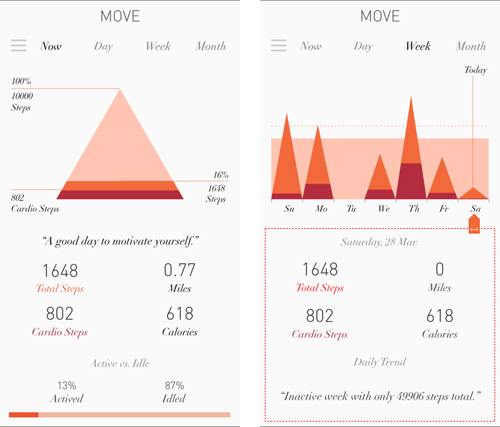 One aspect of the Wellograph experience that we found irritating was syncing with the phone app. The Bluetooth sync isn’t kept continuous as with many other trackers. The company believes that this saves battery life, and that users needn’y sync so often when they can see all the info on the watch display.

I get this but still found the process a little fiddly, even after a couple of weeks of wearing one. To sync you turn off the Bluetooth on your phone, turn it on in the watch (shortcut for this is holding down top button), turn it back on the phone and press the watch in the settings area. Then you can open the app and sync there. It’s a couple of steps too far to call this seamless.

Also, the sync requires the watch 210mAh battery to be at least 35 percent charge. To have the watch with a third of its charge remaining but not be able to sync seems harsh.

The company explained to me that the reason it requires power above a third for a Bluetooth sync is to make sure the device won’t ever be bricked while doing a firmware update, or lose data during a sync. This is the same reason why you need to have your iPhone plugged in when you perform an update, but then why not require the same of the Wellograph. After all, how many times do you have to download new firmware versions?

You power-up the Wellograph with its proprietary charging dock, which connects to a power source via Micro USB. 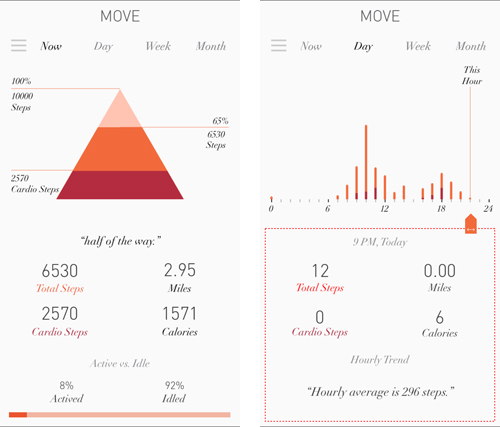 The Day view on the app shows 24 hours of today. The Week view show seven days of the present week. If you want to look back further, you need to go to the Month view where it shows the entire month as well as the historical, most recent six-month trend.

At present the app doesn’t allow you to look for the detailed data of a certain day of a certain month, but the company tells me that it  will probably update that so that it lets you see your previous seven days and the preceding ones, for example.

However, all of your data is saved and can be exported to other services such as Apple Health, RunKeeper, and MyFitnessPal. 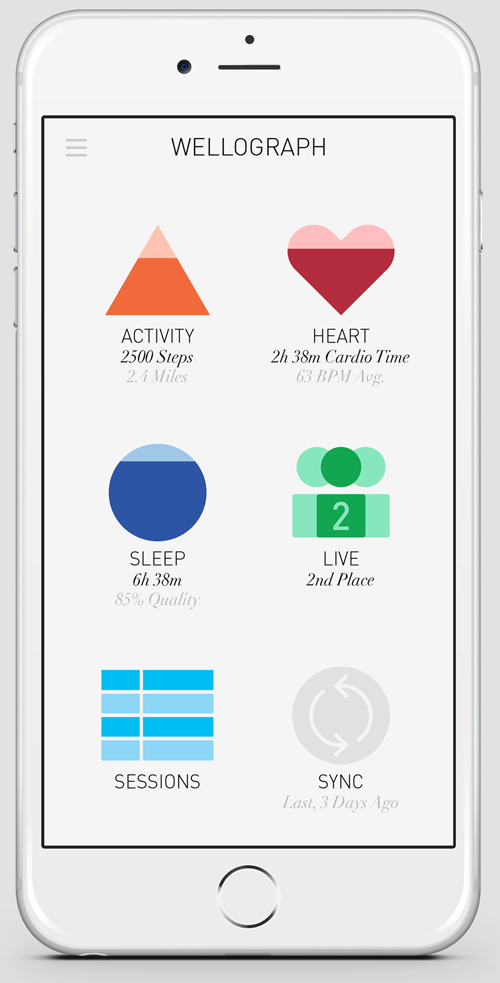 The graphs and display on the iPhone, Android and Windows Phone apps are as gorgeous as on the display. You can see detailed stats analysis on Activity, Hear, Sleep, friends league, and Sessions.

One essential for fitness trackers is the ability to compete against friends, and this is possible with the Wellograph’s Live feature. Of course you’ll need to find friends with a Wellograph.

It does do one thing that the Apple cannot: monitor your sleep patterns.

Its battery life is way longer than the Apple Wath, and that’s helped by being less of a jack of all trades.

At 55g the Wellograph is lighter than the Apple Watch, which weighs in at at least 62g with strap. (Apple Watch strap weights all differ so again a direct comparison is difficult.)

But there’s no denying that the more expensive Apple Watch will have more appeal for iPhone users, and wins out on everything but sleep measurement and battery life.

A closer comparison is with the market-leading Fitbit range of tracker wristbands that feature a heart-rate monitor: the £119 Fitbit Charge HR and £199 Fitbit Surge. See: Which Fitbit is best?

With its larger display the Surge is more like the Wellograph watch.

The Surge’s display graphics aren’t a patch on the Wellograph’s, but it does have more fitness features, such as the altimeter to measure height climbed. Its built-in GPS is also a big bonus, meaning you can map your run or hike without having to lug another GPS around with you.

The Surge also boasts Caller ID, text notifications and music control from your smartphone. Those who don’t want their wrist vibrating every time they get a call or text won’t mid this missing functionality.

Sports nuts might prefer the more active looks of the Surge, but fashion fans will dress up with the Wellograph.

We found the Fitbits to be more comfortable in bed, but both track your sleep patterns – unlike the Apple Watch that is likely someplace else charging while you sleep.

The Wellograph costs US$299, and you need to add $25 for international shipping if you buy direct from Wellograph. This works out to around £215 – pricier than most activity trackers, but you are getting a dressy watch into the bargain. You can also buy it from Amazon, but not usually any cheaper than going direct.

There are no super-luxury models or strap editions to push the price up, and, while expensive, the Wellograph does look and fell like the premium gadget that it is. 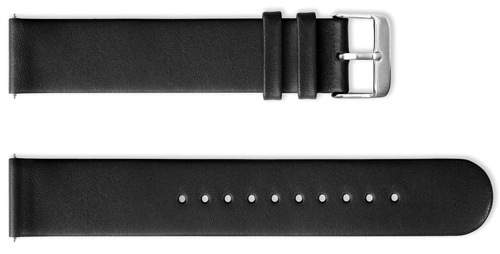