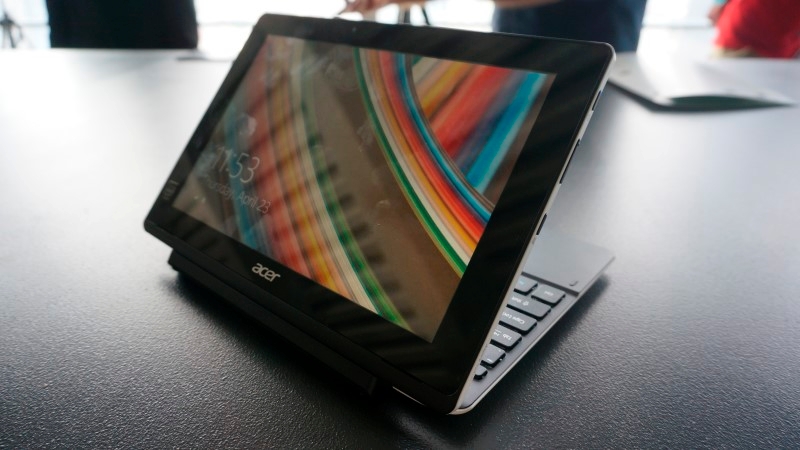 The Acer Aspire Switch 10 E for 2015 looks like a possibly good choice for those after a Windows 2-in-1 laptop and tablet without breaking the bank. However, it’s a shame that not much has been changed from the original.

The Aspire Switch 10 is still essentially the same product as last year – a small laptop and tablet in one devices thanks to a detachable keyboard dock. However, a few changes have been made to improve it for this year. It will be priced from £279 in the UK.

For starters, the Switch 10 is available in various colours, six to be precise. It’s a plastic design and uses a patterned texture making it a little like fabric. It looks nice and helps with grip too. The shape is more rounded which make the device look more attractive too. Also see: Best new tablets coming in 2016.

This plastic model is the Switch 10 E (SW3-013) and Acer announced the Switch 11 V at the same event which uses a metal design for a more premium finish. An Acer spokesman told PC Advisor that there will be a Switch 10 V at some point. The Switch 11 looks and feels great and has an Intel Core M processor. Unfortunately, the samples available at the event were not working so we can’t provide a proper hands-on with it.

Although there isn’t a metal version of the Switch 10, Acer has introduced one with a Gorilla Glass 4 rear cover which looks more stylish but has the same square type shape as the original.

We’re pleased with the more attractive design but it’s a massive shame that Acer hasn’t addressed a fundamental problem with the Switch 10. It still falls over backwards if you tilt the screen far enough due to it being top-heavy. This is a massive oversight from Acer and remains a fairly major flaw. It’s also a shame that it’s still pretty chunky and heavy – 11mm and 630g for the tablet alone then 22.9mm and 1.2kg when docked to the keyboard. That’s worse than last year’s model.

Acer has created a new version of the hinge, called Snap Hinge 2, to improve the experience of connecting the tablet with the keyboard (it comes off just as easy). We found it a little easier to attach than last year’s model and there’s a more audible click so you know you’ve done it right.

On the hardware front the screen remains 10.1in and IPS but the resolution has been changed slightly to 1280 x 800. We’d rather it was Full HD but the price is low so it’s understandable. Viewing angles are reasonable but not as good as some IPS screens we’ve seen and the brightness isn’t outstanding.

Storage is either 32- or 64GB and there’s a microSD card slot on the side for adding more with a memory card. We’re also told there will be an option to buy the keyboard dock with a hard-drive inside. It comes pre-loaded with Windows 8.1 and runs on an Intel Atom processor and either 1- or 2GB of RAM. Performance seemed good during our hands-on time but it’s always difficult to get the full picture until we get it into our lab for proper testing.

Another thing we can’t test is battery life but Acer claims an impressive 12 hours. Remaining specs include 2 Mp front and rear cameras, a Micro HDMI and a full-size USB port when the keyboard is attached.