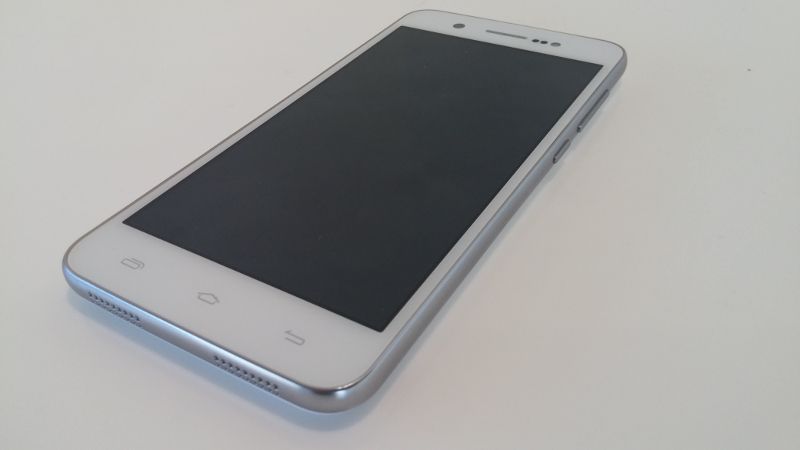 As ever with smartphones, you need to consider how much you can afford, and what you need. If you need a dual-SIM smarphone with a 5in display, the Prestigio Grace X5 is great value. It isn’t the best built or the most stylish, and the display is mid range. But if you are in the market to spend around a hundred quid, you really can’t go wrong.

Prestigio Grace X5 review: what it is, UK price

The Prestigio Grace X5 is an inexpensive dual-SIM Android smartphone with a 5in display. For just £105 inc VAT you get a quad-core processor and 1GB RAM, as well as Android 4.4 KitKat. On the face of it this is a very good deal indeed, so lets look into the details and see where costs have been shaved off to create such an apparent bargain. (See also: Best budget smartphones: 14 best cheap phones you can buy in UK.)

If you can’t quite stretch to a hundred quid, by the way, you should check out our Prestigio Grace X3 budget dual-SIM phone review.

This is often the place in which smartphone manufacturers find some savings. And in truth the Prestigio Grace X5 is no-one’s idea of a high-end, stylish device. But it is certainly not a poorly constructed smartphone.

From a distance, it even looks a little like an iPhone 6. A little.

The Prestigio Grace X5 measures 137 x 68 x 8 mm, and weighs in at 137 g. It is a long and tall device, available in black or white. Because smaller components are more expensive, often with cheaper smartphones you end up with a thick and chunky device that has huge bezels around the screen. That is not the case: 8mm isn’t as thin as it gets in this type of phone, but it is certainly no brick. And the edges are rounded and smooth which makes the Prestigio Grace X5 feel thinner than it is. We had to measure it to believe it is as thick as the claimed 8mm.

The front of the device comprises only glass, with thin bezels framing either side of the display. The bezels at the top and bottom are wider, but not offensively so. Above the display is the front-facing camera aperture and speaker. Down the bottom we find the three traditional Android touchpoints.

The sides of the Prestigio Grace X5 are a metallic look silver plastic, again rounded for comfort. Here we find the on/off button and  And the detachable back panel is a thin plastic sheet with a textured finish. Good point: it comes away and fits back on with ease, offering access to detachable battery, two SIM slots and the SD card slot. On the negative side, it is so thin that although the Prestigio Grace X5 feels robust in whole, the back panel feels dangerously flimsy.

The overall effect, however, is of solid build and less-than-hideous style and design. The Prestigio Grace X5 feels comfortable in the hand and over the course of a week or so in use never gave us the impression of being too delicate to be my sidekick. The white back did pick up some dirty smudge marks, however. (They wiped off.)

Here we are happy with our lot. The Prestigio Grace X5 has a 4.7in display with a resolution of 720×1280. This makes for a decent-if-not-market-leading pixel density of 312 ppi. It’s an IPS display, too.

Look closely at icons and you can see some pixelation around the edges. Photos look nice without blowing you away. The colour pallete is a little bland, but nothing that would cause you to complain (unless you are used to a flagship such as the LG G3, and view the same image on both devices. In which case, get your wallet out). Indeed, overall our impressions of the Prestigio Grace X5’s display are positive. It is better than you could expect at this price range, and wouldn’t have looked out of place on a 2013 flagship.

The Prestigio Grace X5 is built around a quad-core MediaTek MT6582M CPU, clocked at 1.3GHz. Graphics are handled by a Mali-400MP2 GPU, and both are powered by 1GB of RAM. This is a reasonable, middle-of-the-road spec that feels better than it ought on a 100 quid phone.

In use the Prestigio Grace X5 feels responsive and fast. It’s certainly no power device, but I doubt that anyone using it would feel that they are unhappy with the levels of performance, unless they are trying to play particularly intensive games or something similarly inappropriate. (See also: What’s the fastest smartphone 2015 UK?)

This is borne out by the synthetic benchmark results. Such tests should only ever be used as a back up and guide, as they are no true record of performance. But in the case of the Prestigio Grace X5 In our Geekbench 3 testing we returned average scores of 1080 points in the multicore- and 372 points in the single core test. These scores put the Grace X5 in a similar bracket to that of the Motorola Moto G, or the original Nexus 7 tablet (or indeed, to that of the cheaper Grace X3). Both excellent performers when you consider their budget prices, but nothing like as powerful as the big beast Android flagships. So it is with this handset.

We couldn’t get all of our graphical benchmarks to run, but in the onscreen T-Rex test of the GFX Benchmark we got a decent result of just under 10fps. The Prestigio Grace X5 will run games, just not the most graphically intensive.

As is now traditional we find two cameras on the Prestigio Grace X5. Around the front is a 5Mp selfie camera with a flash. Around the back we find a 13Mp camera. It has a BSI sensor, autofocus, and LED Flash Light. Presitigio says that the BSI sensor should make low-level photography better. I wouldn’t suggest that you put down your DSLR and pick up the Prestigio Grace X5, but as you will see from the test shots below it is not a bad smartphone camera.

The Prestigio Grace X5 comes with 8GB of onboard storage, we are told. That isn’t great straight off the bat, but it gets worse. As with the Grace X3 we could access only 4.99GB of that 8GB storage, and before we installed anything that number dropped to 4.51GB. Prestigio isn’t lying, and this isn’t all that unusual. It is just using a big chunk of that storage. We can get into why this is in the Software section below.

The good news is that you can add an additional 32GB via the SD card slot. But that is an extra cost, can have a negative impact on performance, and still leaves you with only 37GB. So not so great on the storage front. We could forgive this more in the cheaper Prestigio Grace X3 than we do this phone. Such is life.

Network bands include GSM 850/900/1800/1900 MHz, WCDMA 900/2100 MHz, and you get 3G, EDGE, GPRS, GSM. Sensors include GPS, A-GPS. And, of course, you can install two SIMS to operate across two international territories or use the same handset for work and play. (See also: Best dual-SIM smartphones: 11 best phones into which you can put two SIM cards.)

The Prestigio Multiphone Grace X3 comes with Android 4.4 KitKat, and has full access to Google Play and all other features of recent Android. It is Prestigio’s own version of Android, however, which may explain some of that storage hogging. The principle noticeable difference to vanilla Android is that the fonts and icons are all slightly different. And Prestigio includes a special, er, clock: designed I think to make the phone feel prestigious (geddit?). So that’s nice.

More important are the myriad apps that were installed on my Prestigio as soon as it arrived. All are taking up space. Prestigio’s installed Android is taking up at least 3GB of the nominal 8GB available. That’s too much: if I want additional apps I will install them. It is the hidden price of a cheap smartphone, and for many it will be a price too far. (See also: Best Android smartphones of 2015: The 49 best Android phones you can buy.)

The Prestigio Grace X5 comes with a 1800 mAh Lithium Ion cell. That feels small for a device with a quad-core chip, but the display is relatively low-spec and in heavy use we found we comfortably got through a day of solid smartphone usage without needing to recharge. See also: Best smartphones.