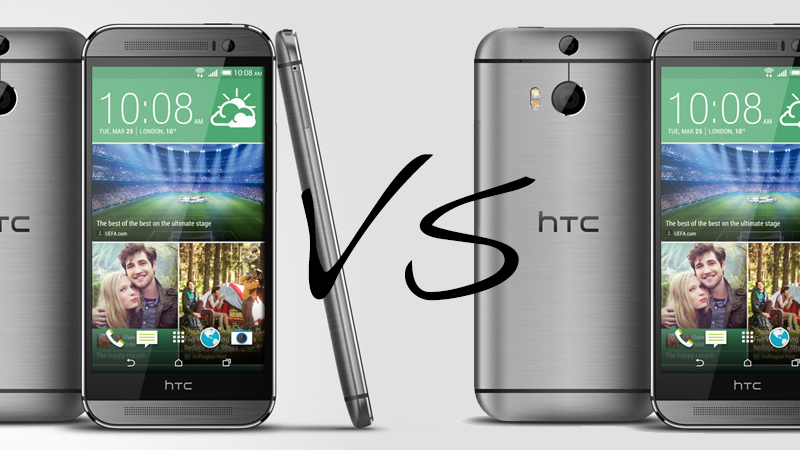 The HTC One M8s makes an appealing alternative to the HTC One M9 if that’s out of your budget. It has a premium design and excellent specs, but it’s not different enough to the One M8 for us to recommend an upgrade if you own last year’s HTC flagship. If you’re considering a high-end HTC smartphone, the One M8 is well-worth investigating and we’ll be bringing you our full review soon.

The HTC One M8 was HTC’s flagship of 2014, and it was a popular one at that. Its premium design combined with impressive specs caught our attention, but it’s since been replaced by a new, even better smartphone from HTC – the HTC One M9. See also: Best smartphones 2015

However, the M8 is not dead. In fact, it’s been improved upon and reduced in price in the form of the HTC One M8s, making an appealing alternative to the HTC One M9. Here, we compare the HTC One M8 with the HTC One M8s to determine the differences and similarities between the two smartphones.

HTC One M8 vs HTC One M8s comparison: UK price and availability

The HTC One M8 isn’t the newest of HTC’s flagships. It was replaced by the One M9 at the end of March. However, you’ll still find the One M8 available to buy from HTC.com for £549.

The HTC One M8, on the other hand, is an even newer smartphone from HTC that represents a more affordable option, with an RRP of £379, for those who don’t have a budget that’ll quite stretch to the One M9’s £579 or the One M8’s £549. You can find the One M8 cheaper than HTC’s official RRP but you’ll still find that it’s around the £500 mark in most cases.

The M8s was unveiled in April and is expected to hit the shops very soon, though it’s yet to appear on HTC’s website so we’ll be keeping an eye out for its arrival.

HTC One M8 vs HTC One M8s comparison: Design & build

Put these two smartphones side by side and you’ll find it extremely difficult to tell which is which. They both sport the same 5in screen and the same all-metal shell, which means you’re getting the premium look of the One M8 even in the cheaper One M8s.

It is a tiny bit thicker than the HTC One M8, though, at 9.55mm compared with 9.35mm, but unless you have the vision of an eagle you’re unlikely to notice. The weight remains the same at 160g.

HTC One M8 vs HTC One M8s comparison: Specs & hardware

As mentioned above, the HTC One M8s’s display shares the same 5in size as the One M8, but it also offers the same full-HD, 440ppi resolution, so you’ll get that stunning screen at a much better price.

The processors are different, though. The One M8 has a Snapdragon 801 processor, which is 32-bit and quad core, while the M8s’s processor is new. It’s a Snapdragon 615, which is 64-bit and octa-core. We don’t think you’ll notice much difference in normal day-to-day use, but we’ll be putting the M8s through its paces in our benchmark tests when we get one back to our labs for our full review.

Other similarities include the same 2GB of RAM and 16GB of storage with microSD expansion of up to 128GB, but surprisingly the other features in the M8s improve upon the M8.

It has an improved battery, for example, slightly up from 2600 to 2840mAh. The camera is better, too. There’s now a 13Mp main camera rather than the 4Mp ultrapixel camera in the One M8. You still get the ‘duo’ arrangement that lets you change the focus of a photo after taking it, too, which was one of the M8’s key selling points when it launched last year.

The front-facing camera hasn’t changed, it’s 5Mp in both smartphones, and there’s no 4K video capture.

HTC One M8 vs HTC One M8s comparison: Software

Both the One M8 and One M8s can run Android 5.0 Lollipop, Google’s latest operating system, and that’s paired with HTC’s Sense 6 UI. That means you get HTC’s BlinkFeed news aggregation app, as well as the company’s sleek, simple user interface design that we really enjoy using.