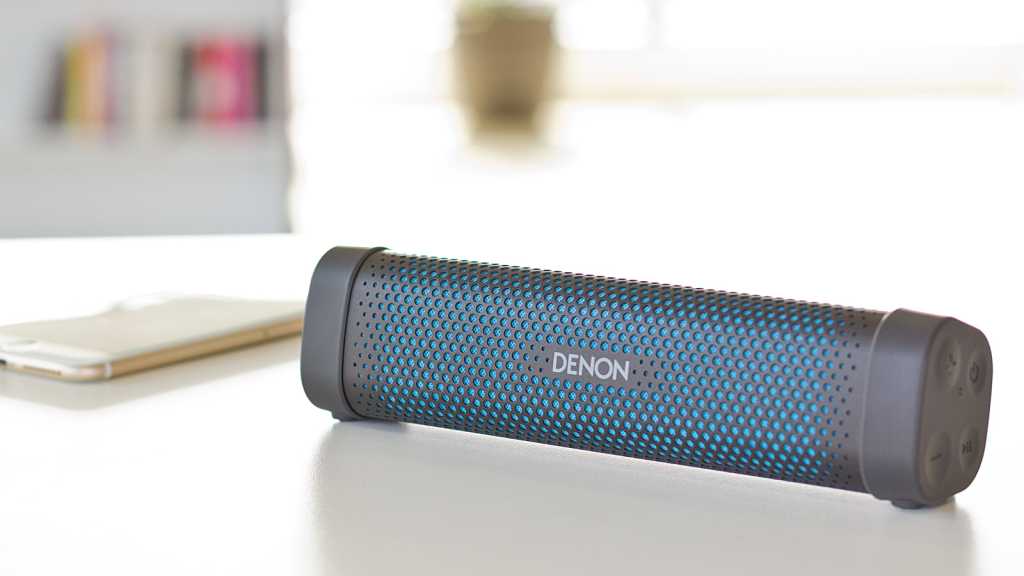 For a £99 speaker, the Denon Envaya Mini blows away similarly priced Bluetooth speakers. The design of the Envaya Mini gives it a premium look and feel, without the premium price tag to go along with it. We mention the UE Boom in the review, and that’s because we think that the Envaya Mini is at the standard of a £169 Bluetooth speaker. Even without a 360-degree speaker setup, it does a great job of filling a room with the sound of clear and crisp audio. 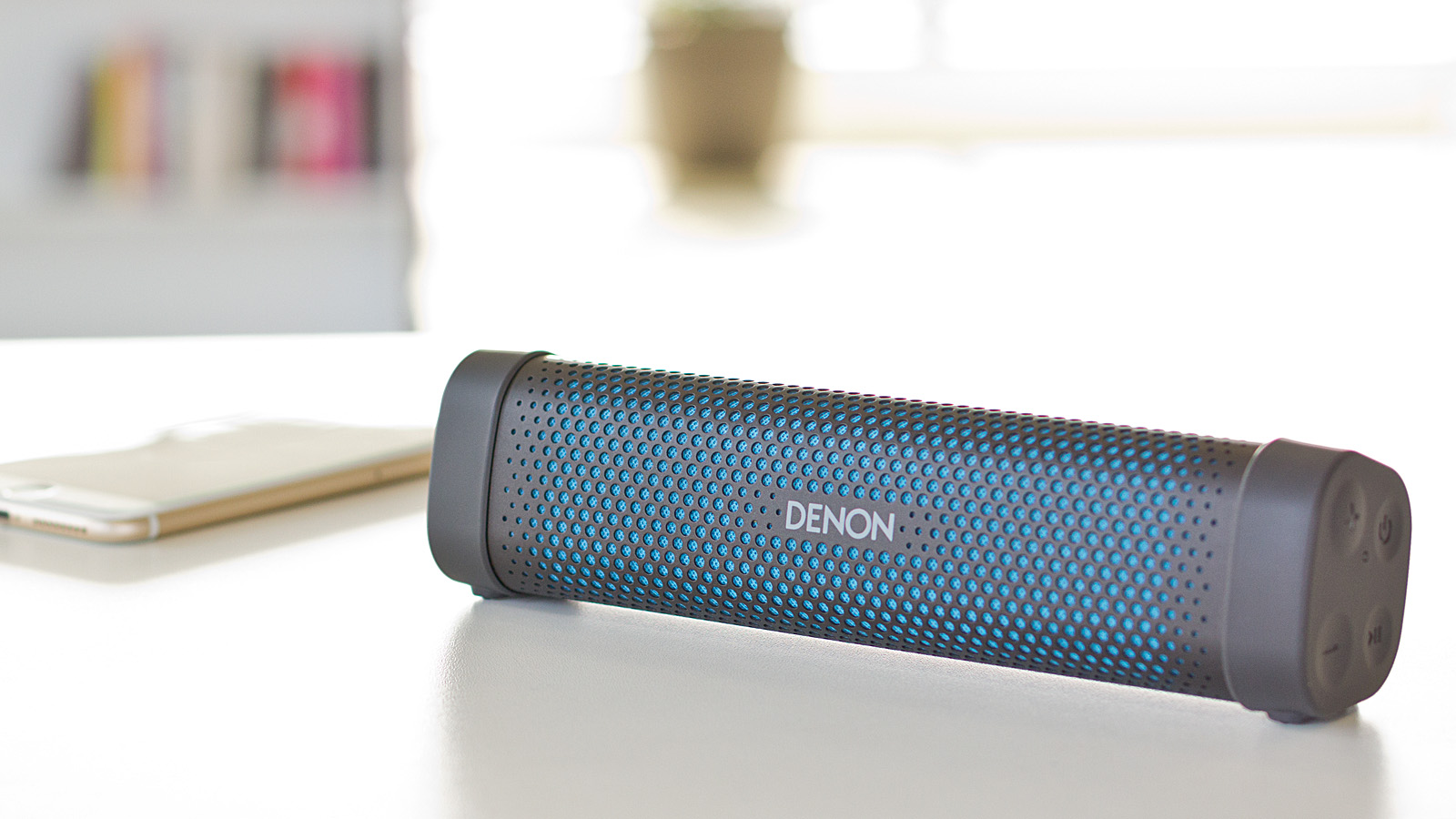 The Denon Envaya Mini is a relatively new contender in the competitive Bluetooth speaker market, ready for use with your phone, tablet or laptop. Does it have what it takes to fend off other sub £100 Bluetooth speakers? It boasts a considerable amount of on board technology that Denon claims enhances the audio – but does it? Read on to find out. Also see: Best tech to take on holiday 2016.

In terms of design, the Envaya Mini is gorgeous. Peaking through its metal black grille is a vivid shade of blue (we’re sure it isn’t white and gold!) offering a dash of colour to an otherwise completely black speaker. The circular grille effect is a nice addition, making the Envaya Mini a very visually distinctive Bluetooth speaker – and that’s without noticing the Denon logo across the middle of the grille. It also comes with a very soft, luxurious carry case that contributes to the very premium look and feel of the speaker.

If the blue and black colour combination isn’t to your taste, Denon also produce a white and orange variation – we think blue and black is best, but each to their own.

It’s a very solid speaker, with rubberised feet at either end that protrude slightly, further than the speaker itself. These offer extra grip, which comes in handy when the speaker is being used at high volume with a lot of bass – nobody wants their speaker to slowly vibrate off the table.

The Envaya Mini is a bit like an optical illusion, simply because it’s heavier than it looks. We were surprised when we held it for the first time, as it measures in at a rather compact 20.9×5.4×5.1cm, but weighs 558g. That’s not necessarily a bad thing though, as we mentioned earlier it feels like a very solid speaker and the weight adds to that. It doesn’t feel like a light, plastic speaker, it feels like a solid, premium metal speaker and that’s a great feeling to have for a sub-£100 speaker. 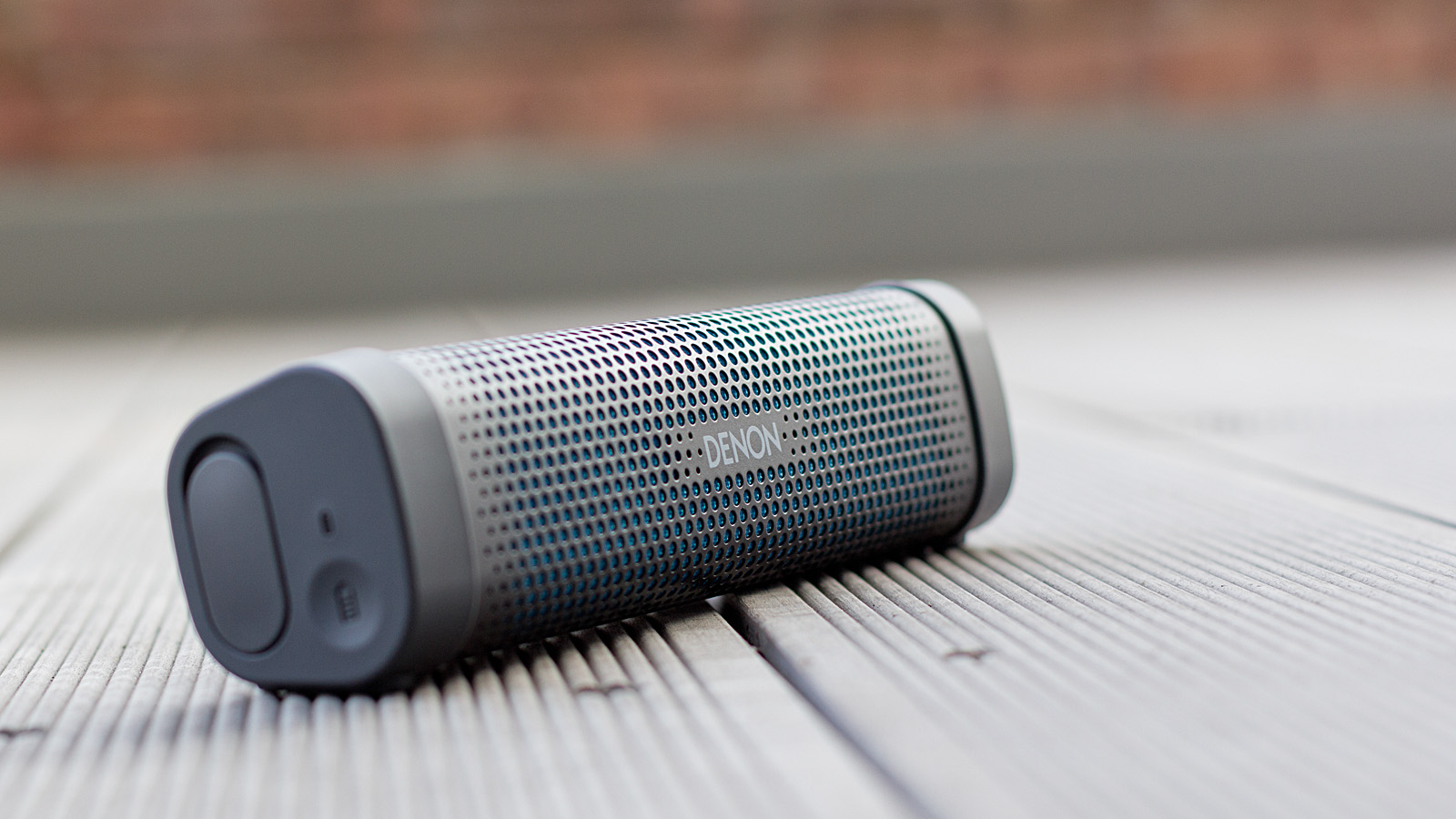 The Envaya Mini has physical button control, which is great to see when so many mid-range Bluetooth speaker manufacturers are implementing rather frustrating touch capacitive buttons instead. There are volume controls, as well as a pause/play button and a battery indicator button, which lights up a small LED with different colours depending on the level of battery life. While that’s okay for most people, we’d like to see a specific battery percentage, be it via audio prompt or via your smartphone, much like the UE Boom.

Don’t worry about getting the Envaya Mini wet either, as it’s water resistant. With that being said, don’t go and submerge it in water – it has an IPX4 rating and can only withstand light showers or drink spillages for example, which is handy for using the speaker outside or in a party environment.

It’s also got an integrated microphone with noise cancelling capabilities, enabling speakerphone functionality. When we tested this, we had no complaints from the recipient of the call about the clarity of the call and we could hear them clearly.

The only real downside is that you can’t use the volume controls to change tracks, a feature that’s popular in Bluetooth speakers. There are certain situations where having the ability to completely control the music from the speaker is beneficial, and for a speaker that ticks most boxes, it’s slightly disappointing.

There are two connections available when it comes to the Envaya Mini; Bluetooth 4.0 and Aux-in. It does also boast NFC capabilities for one touch pairing, just tap your NFC compatible phone on the NFC logo on the speaker and you’re set up, ready to go.

The setup process for Bluetooth isn’t a long process anyway; it only requires you to hold down the play/pause button for a few seconds before it appears on your devices list on your phone’s Bluetooth menu. 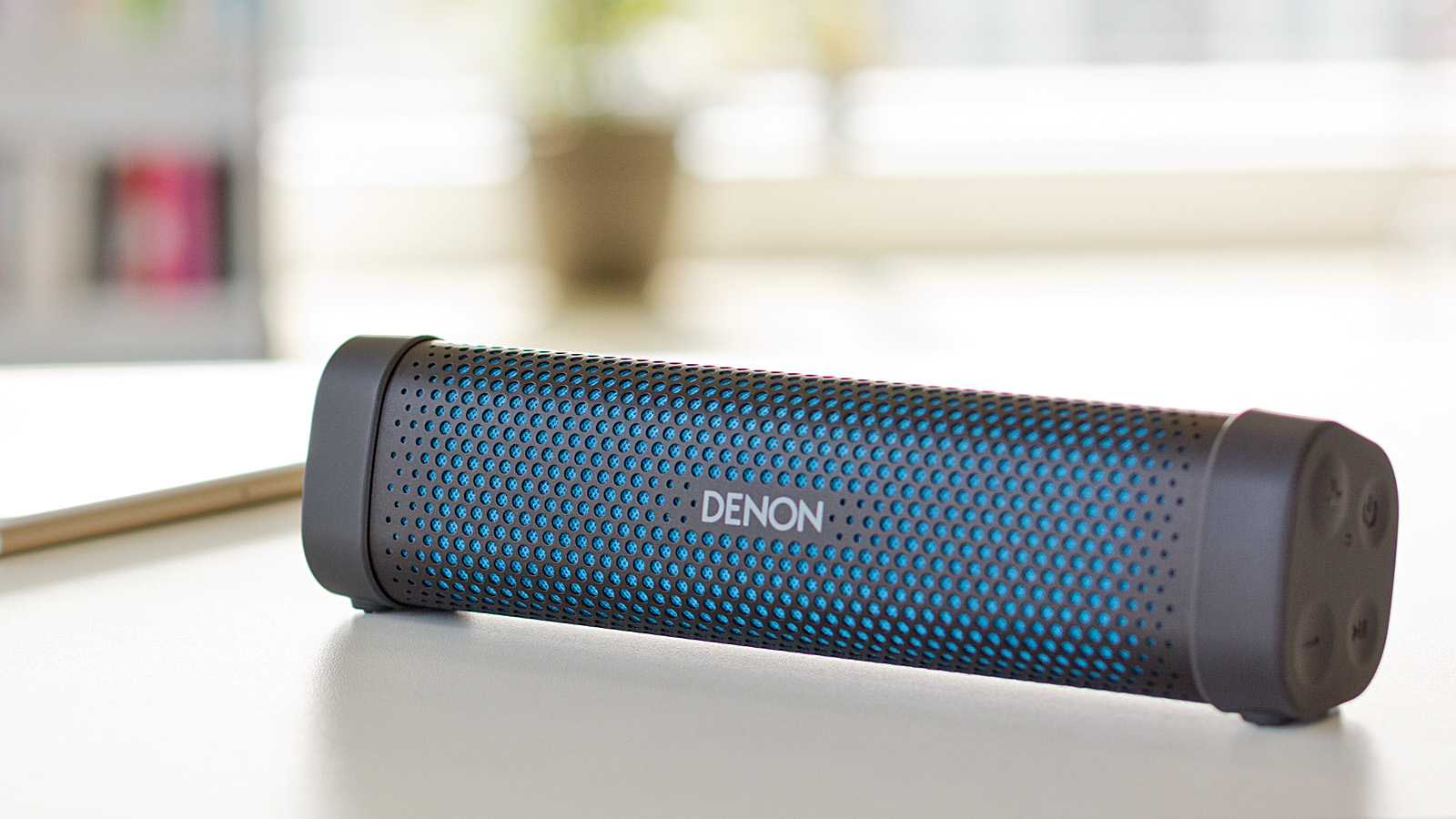 The Bluetooth range is quite impressive too, where some Bluetooth speakers start to stutter after only 5m of distance, we could step outside the room and still have music playing. This will vary though, depending on objects between you and the speaker – if there was a brick wall instead of a plasterboard wall in our test, we don’t think it’d have the same effect.

One particular feature of the Envaya Mini that caught our eye is the ability to connect to more than one device at a time. This isn’t a new feature as we’ve used speakers that support two connections at once, but Denon decided to take it one step further and allow up to eight connections simultaneously. This means that one person can pause their music and let a friend take over, without any awkward crossover period with no music playing. It’s a great feature to have, especially for social situations and reinforces the fact that the Envaya Mini stands out in its price category.

Despite the positive review so far, audio is where the Envaya Mini truly excels above and beyond our expectations. Bluetooth speakers around the £100 mark have a tendency to be either extremely bassy with disappointing sound clarity, or they’ll have great clarity but a severe lack of bass. That’s not the case with the Envaya Mini, which boasts dual 40mm full range drivers with a 40x83mm passive radiator, which produces both crisp sound and impressive bass.

Why does it sound so much better than other speakers in its category? There are various factors at work that help to produce the great sound quality, with one being the fact that Denon has used larger drivers than most small Bluetooth speakers, paired with a large passive bass radiator for a good balance of clarity and bass.

People often opt for a wired connection opposed to Bluetooth, simply because traditional Bluetooth compression methods have a negative effect on audio quality. Denon chose to opt for aptX, which is a higher quality Bluetooth streaming format that the company claims provides CD quality streaming, as if you were connected to the speaker with an audio cable. While we can’t confirm whether it produces CD quality streaming, we didn’t notice a difference in quality between a Bluetooth connection and a wired connection, so Denon has done something right with the Envaya Mini.

The audio is room filling, which is impressive for a speaker of this size. Don’t mistake that for blaringly loud – there’s a difference between the two. The Envaya Mini isn’t the loudest Bluetooth speaker we’ve ever used, but it doesn’t have to be – it’s more than just sheer volume and bass, it’s an audio experience.

There’s only one issue with the Envaya Mini, and it’s not a huge problem but one we noticed during our testing. Like most Bluetooth speakers, the Envaya Mini’s drivers face in one direction, which produces an audio “sweet spot” where the audio sounds fantastic. However if you’re not directly in this sweet spot, the experience, while still good, isn’t as great as it could be. We’d have loved to see some kind of 360-degree speaker setup similar to the UE Boom to help tackle this issue. 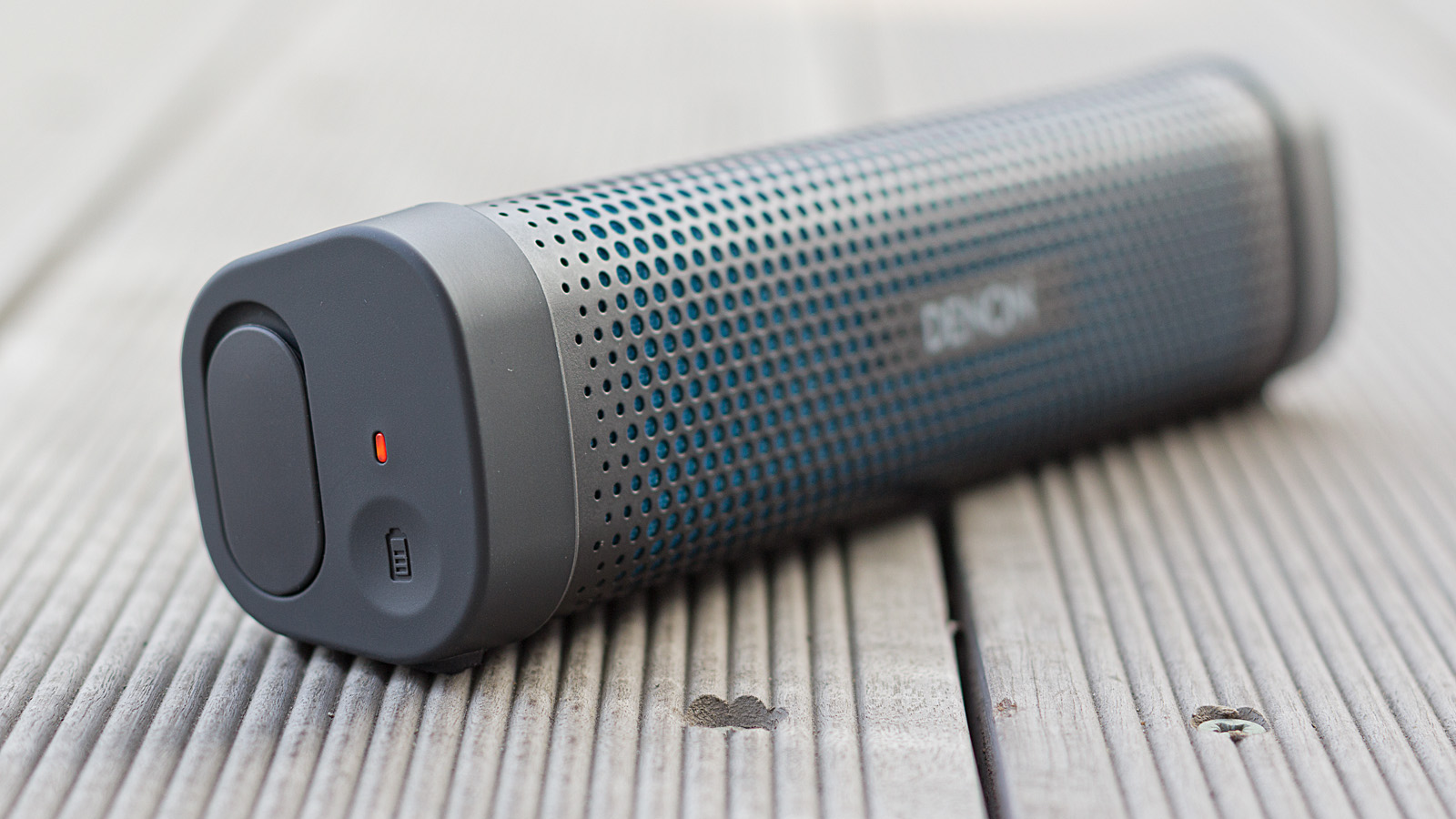 Denon claims that the Envaya Mini should generate around 10 hours of playback on a single charge. While results will vary depending on volume and other factors, we never got the Envaya Mini to reach its 10-hour battery life, usually giving up around the 6/7-hour mark. It’s easy enough to charge though, using a standard Micro-USB cable that many people have laying around.