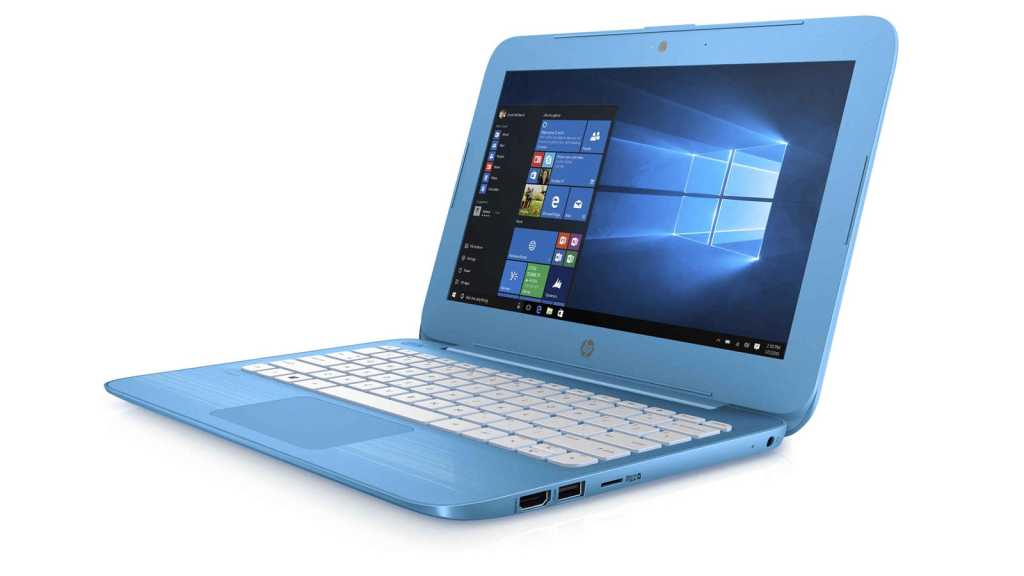 The HP Stream 11 is using the cheapest Intel chip that can run Windows comfortably, has a very limited eMMC storage card with just 20 GB available space, and includes a free version of Windows given away to PC makers to keep Google Chrome OS at bay. But the result is a surprisingly useful compact laptop, attractively styled for anyone that likes bold bright colours. It runs quick enough to surf and type, and always remains cool and silent. To use HP’s own bizarrely chinglish marketing prose, that’s got to help you ‘work from happy place’.

HP has taken the budget Windows laptop sector by storm with the Stream 11, a compact 11.6-inch laptop that’s priced to sell for just £179. Despite being advertised over last Christmas, the slow boat from China missed the present season and has only just arrived with its consignment of the cheapest Windows laptops to land on Blighty’s shores. How on earth did HP hit this low price point, and what sacrifices did it have to make to keep the price down?

The principal economy is made not at our expense, but through HP accepting Microsoft’s gift of a free version of Windows 8.1. That knocks off the traditional Windows tax that the manufacturer pays to Microsoft, with the cost then passed to the customer. See all laptop reviews.

The Stream 11 has Windows 8.1 with Bing already installed, which requires the hardware maker only to agree not to switch the default internet search engine away from Microsoft’s Bing service, before the product is packed and shipped. Most PC makers otherwise accept sponsorship deals from Google or Yahoo to change the default search engine, in a bid to claw back some profit above the thin margins the Windows PC industry has let itself work with.

Sounds simple, but it’s Microsoft’s way to encourage Windows users to try its own search engine, thereby diverting valuable personal user data and commercial advertising revenue back to Microsoft. And in the process it makes a small step in reducing Google’s monopoly in the search and data-mining market.

This doesn’t mean the Stream 11 is free of crapware though. HP is still using its laptop as a platform to sell you other services, such as its own Snapfish photo printing service, while also accepting kickbacks from TripAdvisor, Amazon, Dropbox, Netflix and McAfee, whose software and web shortcuts litter the desktop and programs folder. Also see: Best laptops 2015.

HP makes the Stream available in a choice of two wild colours, which for many browsing customers may be the defining aspect of the computer after the enticing price. Our sample was in Orchid Magenta, a lurid pink with a colour gradient on the top deck that slides from baby pink to purple. The main pink colour encompasses the laptop, from underside to lid to screen bezel. With the display open this is complemented by a white tiled keyboard. For the pink averse, there’s also a version in Horizon Blue

Build quality is basic but essentially without fault. The Stream feels plasticky, and that’s because it is, but perhaps because of the junior colour scheme it doesn’t seem too cheap, merely toy-like.

Turning to the underside again, we find no hatches or doors, not even a cheesy Genuine Microsoft sticker; but nor is there a way in to change the battery or memory aside from taking the unit to pieces. We did take it apart, and found that there is no opportunity to upgrade the limited memory.

On the left side is an SD card slot and Kensington lock slot, the latter to help you lash the laptop down to secure your investment from casual theft. The card slot will be of especial value here since HP fits a minute 32 GB internal storage drive, from which around 20 GB is available after the Windows OS and other software has been accounted for. That 20 GB will quickly prove too small; but on the other hand we were a little impressed that Windows has been trimmed from its usual 20 GB bloat for a basic install, to less than 10 GB. Also see: Laptop Advisor.

You can pop in a 64 GB SDCX card for under 20 quid though, to give you the storage breathing space you will urgently need. There’s also the option of using HP Connected Drive for £60 per year, or the time-limited demo of Dropbox, if you’re comfortable offloading your personal files to other companies’ servers.

On the right side are two USB ports, one each of v2.0 and v3.0, an audio headset jack, and HDMI to connect an external display. As with all modern laptops, there’s still a webcam in the bezel, built-in mic (a dual array model is listed here) and tiny stereo speakers which sound out from under the front edge through small perforations in the casework. The sound volume was enough to hear the outline of a song, and should be fine with VoIP chats in quieter environments.

Note that there are no other airways into the laptop’s interior, as it is another fanless design, the second of such we’ve seen after the Asus Zenbook UX305F. That is a tremendous asset, removing a point of maintenance and failure in one step. And with the lack of spinning hard disk inside too, the removal of the tiresome cooling fan also means totally silent operation.

Inside the HP Stream 11 is a budget Intel processor, a dual-core Celeron N2840 running at 2.16 GHz. This is backed by 2 GB of memory, running at a slightly slower speed than most modern chips, 1333 MHz instead of 1600 MHz. For graphics, the CPU includes an integrated unit simply called Intel HD Graphics.

Storage relies on a 32 GB SanDisk eMMC card, comparable to a regular SD card in performance, which is to say not particularly fast; and not as capable as a regular SATA SSD.

Wireless connectivity is available from a single-antenna Wi-Fi adaptor capable of joining 11n wireless networks. Bluetooth is present in its current v4.0 form.

The processor and memory provide raw performance roughly comparable to a two year-old smartphone. With a single-core score of 1022 points, and 1797 points for multi-core mode, its result is somewhere between an iPhone 5 and iPhone 5s, for instance.

We tried the Cinebench 15 test to get an alternative guide to its speed, and saw figures of 41 and 75 points for the same two modes of processor operation. For comparison, the low-power 800 MHz Intel Core M processor in the new Asus Zenbook scored lowly too but much still higher at 69 and 141 points respectively.

In PCMark 7 the Stream 11 was awarded 2563 points, not a terrible result when compared to the Toshiba Satellite L10W-B-101 which runs the same main chip but which only scored 1721 points. This comparable 11.6-inch laptop was slowed in this test (and subjective feel) by its reliance on a traditional hard-disk drive. PCMark 8 could not be run as it would not install on this computer for unknown reasons.

Turning to the Stream 11’s storage, we ran some CrystalDiskMark 3.0 tests and found it much faster than a hard disk and around one-third the speed of a real SSD.

In sequential reads and writes it rose to 167 MB/s and 78 MB/s respectively. More useful were its small-file transfer speeds, with single- and 32-thread 4 kB write speeds both around 13 MB/s. Those numbers easily trump the sub-1 MB/s speeds of laptop hard disks. The read performance results showed single-thread 4 kB reads at 14 MB/s, rising nicely to 54 MB/s when multiple threads were used to access data. That’s a trick that hard disks can’t pull off, and really helps any computer feel and operate much faster in daily use.

Display quality was poor, but no worse than other budget Windows laptops; and slightly better in fact than the Toshiba cited above. The Stream had a low contrast ratio of just 80:1 and could cover 60 percent of the basic sRGB colour gamut (or 46 percent Adobe RGB). Like most TN-technology panels viewing angles were also seriously restricted, but in its favour it has a matt anti-glare finish so at least you won’t be fighting through light reflections to see what’s on-screen.

Gaming is not an option for the limited processor power. We couldn’t install our usual games for testing on the internal drive so turned to the Stalker: Call of Pripyat benchmark which doesn’t require a complete game installation.

Run at screen native resolution and Medium detail, we saw sub-tests running below double-figure framerates, with an average across the scenes of 8.5 fps. Dropping to 1280 x 720 and Low quality, it could still only average 14.3 fps, too jittery for such action games.

Battery life is important for almost any laptop, not least a 1.3 kg compact sub-notebook you’ll be more likely to carry around all day. And the HP Stream 11’s unplugged runtime didn’t prove too bad in our standard video run-down test, lasting for 8 hr 45 mins.