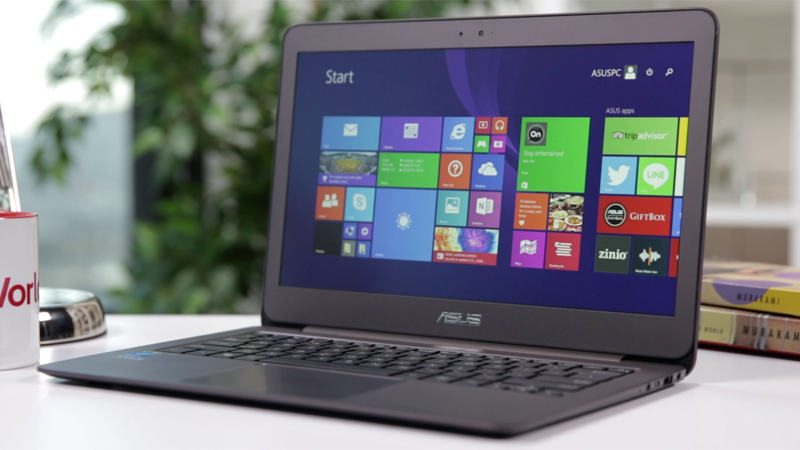 The new ZenBook is a great home for Intel’s new Core M processor, which proved up to basic daily tasks in Windows with no obvious lag in the interface. Good battery life and decent screen quality are further plus points to a well-made case with a familiar design to Apple fans. At a price of £650 this is an attractive package as a carry-anyway Windows laptop.

Asus may have copied the MacBook Air wholesale with its ZenBook range, first launched in 2011. But with this year’s new ZenBook UX305F the Taiwan manufacturer pipped Apple to the post by coming to market first with its Air clone using the intriguing new Intel Core M processor, the same low-power series that drives the new super-lightweight MacBook.

The ZenBook UX305F is a 13.3-inch ultraportable, a near clone of the 13-inch MacBook Air in terms of its chassis shape, profile and all-metal solid construction.

It differs in its smaller but higher-resolution screen, which benefits from IPS-like AHVA technology and a matt anti-glare finish. This display has 1920 x 1080 pixels, and this full-HD resolution in a 13-inch frame is arguable the best compromise for a Windows computer display, since the operating system does not scale reliably beyond 150 percent.

Powering the UX305F is an 800 MHz Intel Core M-5Y10c processor, built on a new smaller 14 nm process. Yes, that’s a 0.8 GHz base clock frequency, a number we haven’t seen applied to a PC processor since the megahertz wars of the last decade. This can be overclocked in short bursts by Intel’s Turbo Boost technology, up to 2 GHz.

It’s a dual-core chip with Hyper Threading like the popular Core i5 and i7 processors, so can work on four threads like a quad-core processor. Most notable is its low thermal design power (TDP) figure of 4.5 W, allowing its use in laptops without a cooling fan. That in itself is an incredible breakthrough, making for a silent, low-maintenance design with no moving parts apart from keyboard, trackpad and screen hinges.

Asus still leaves some tiny perforations in the case underside as air in/outlets on each side. In use we never noticed the UX305F becoming noticeably warm. Also see: Best laptops 2015.

The casework looks like it fell out of the same machine that makes Apple’s Air, but here finished in a matt anodised dark bronze colour. One small difference is the way the laptop sits on its screen edge at the back; on two rubber stoppers in fact that stand proud of the display frame.

The UX305F is relatively well-equipped in ports and connectors by the standards of ultraportables, featuring three USB ports, all of USB 3.0 specification, plus Micro HDMI video output, headset jack and SD card slot.

Its wireless capabilities run to the now-ubiquitous Bluetooth 4.0 and dual-band 11ac Wi-Fi. This is a two-stream solution too, with maximum signalling speed of 867 Mb/s and potentially better range than the most basic single-antenna cards found in budget laptops.

Working with the Core M processor is 8 GB of low-power 1600 MHz memory and a 128 GB SSD from SanDisk. This latter part is one of the new generation M.2 types and here connected to a regular SATA Revision 3 bus. See all laptop reviews.

The keyboard has the same keys and general layout as the MacBook Air, with the Ctrl and Fn keys reversed, as are the Alt and Apple/Windows keys.

The trackpad look similar, about the same size at 104 x 73 mm (vs 76 mm for the Air) but is a lower grade component without the same precision in mouse steering and multi-touch control. It also proved unreliable, failing to work sometimes when the laptop resumed from sleep, although that is not an uncommon failing with Windows.

The display is unusually good for a Windows laptop though, using IPs-like technology that gives wide viewing angles and better colour gamut. This AHVA (advanced hyper viewing angle) display is made by AU Optronics, and lived up to the manufacturer’s spec with a measured 860:1 contrast ratio, and an sRGB colour gamut of 93 percent (69 percent Adobe RGB). It does have poor listed response time of 25 ms, although we did not notice significant blurring in the limited game benchmarks we ran.

It colour accuracy was good, with a spread from 0.25 to5.95 Delta E, and an average of 0.92 Delta E. The overall performance of this AHVA technology screen is quite impressive when you consider it is only a 6-bit per pixel panel, specified with only 262,000 colours rather than the millions of colours we find with most of today’s 8-bit panels. Also see: Laptop Advisor.

The Geekbench 3 benchmark scored the ZenBook US305F with its Core M processor with 2188 points single-core mode, and 4323 points multi-core mode. Those are far from record-breaking scores, more in line with the iPad Air for example, which was slower in single-core mode (not benefitting from an overclock to 2 GHz) at 1815 points; but slower than an iPad in multi mode, where the tablet scored 4516 points.

This ultraportable is very far from workstation-class but we couldn’t resist stretching it with Cinebench 15 test, where it hit 69 and 141 points for single- and multi-core modes. That’s far behind Asus’ own N550J we tested recently, with 130 and 642 points, as you would hope for a laptop equipped with an Intel Core i7 processor.

PCMark 7 rated the ZenBook with 4266 points, which was a good showing, especially when you consider that Core i7 N550J only scored 3390 points here – likely a result of fast storage in the ZenBook and particularly slow disk in the 15-inch machine.

PCMark 8 Home test gave a result of 3424 points, rising to 3881 points with the help of GPU acceleration. The Work unit gave it 3312 points but with a larger increase found when accelerated, up to 4288 points.

And it is the graphics processor in the Core M that stands out as rather competent, given the wound-down nature of the main CPU. This is an Intel HD Graphics 5300 integrated engine, with 300 MHz base clock and 800 MHz maximum.

In our basic Windows games test with Batman: Arkham City at 1280 x 720 resolution it averaged 25 fps at Medium detail, rising to 28 fps with Low detail. That’s borderline gameable, which we weren’t entirely expecting from this budget 800 MHz CPU with integrated graphics.

Returning to the Cinebench tests, which use OpenGl for graphics rendering rather than Microsoft’s proprietary DirectX, the ZenBook averaged around 16 fps with v11 and 20 fps with v15 of the workstation benchmark.

The 64,000 minute question for Intel’s new processor is how well does it nurture battery life? In our battery run down test playing HD video over a Wi-Fi link, with screen set to 120 cd/m2, it survived for close to 10 hours – 9 hr 58 min in fact.

That’s approaching the kind of battery life we want to see – around 12 hours in this looped video test would be better, to allow for more challenging moments of use and then still able to last through an 8-hour working day.