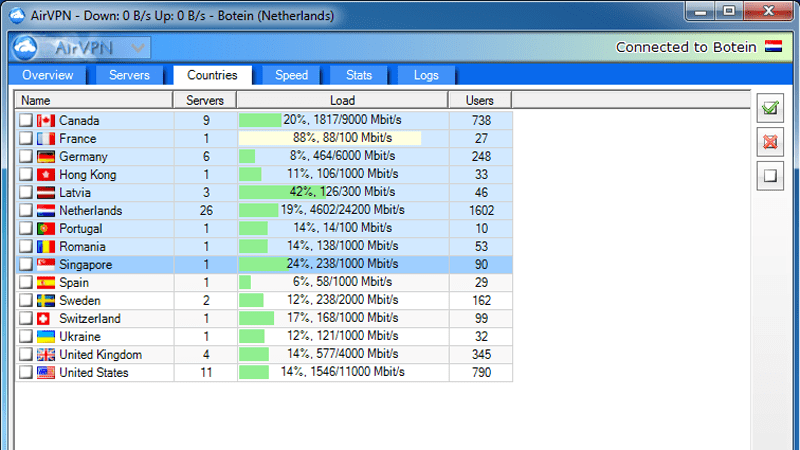 AirVPN is a poweful VPN service using the OpenVPN protocol, with a strong privacy policy and community following. It’s not the fastest available but we’re told that it ignores DMCA and European equivalent notices, respects the ECHR and keeps no logs that can be exploited to reveal customers’ personal data during connections, including real IP address.

AirVPN is an enthusiast-led operation, formed from a collective of privacy-rights activists, hackers and two lawyers in 2010. One of its stated missions is to deliver technical tools aimed to enhance and exercise the fundamental Right to Privacy, as reserved in the Universal Declaration of Human Rights, art. 12; and the European Convention of Human Rights, art. 8. It started as a free service and now has a commercial side to maintain the project.

This is a service suited to knowledgeable computer users, with plenty of fine-grained control. There’s even an option to run the client application from the command line on any platform. Also see: How to use a free VPN: A step-by-step guide.

Prices start with a 3-day trial costing €1, then €7 for 1 month, 3 months at €15, 6 months for €30 or €54 for 12 months. The minimum bandwidth you can expect is 4 Mb/s in each direction, with higher speeds possible depending on server load. In our tests with a local UK server (Maidenhead) we saw 9 Mb/s download, 6 Mb/s upload and 5 ms latency. Also see: How to watch US Netflix in the UK.

AirVPN has an extensive range of support across many devices. The company’s own AirVPN Client software is available for the three popular desktop platforms of Windows, OS X and Linux (Debian and openSUSE); as well as Android and even iOS using the OpenVPN Connect app from OpenVPN Technologies Inc. It is released under a GPLv3 licence so source code can also be independently verified by an experienced developer or security researcher.

Or you can configure a router or firewall to send all traffic through a VPN tunnel, with support for routers running DD-WRT and Tomato open-source router firmware and the FreeBSD-based pfSense firewall. Also see: Why you need a VPN.

The Windows software comprises a simple no-frill interface with six tabs running across the top. These are marked Overview, Servers, Countries, Speed, Stats and Logs. It’s a powerful applicaton which the developers have named Eddie.

The Overview just shows to which server you’re connected, download and upload numerical speed, exit IP address and connection time. It doesn’t inform you of your current connection protocol, which could have been useful. Also see: How to watch US Netflix on an Android phone or tablet.

Servers gives a useful flat list of available servers, their location, latency, current load and number of connected users. These columns can be readily reordered to show servers in order of latency, for example. The Countries tab shows at a glance which national territories are available, again with an indication of server load and user numbers. While many servers have several servers equating to up to 1000 Mb/s bandwidth, we noticed that France had only one, a 100 Mb/s connection that was red-lined into saturation. But most areas showed more like only 10-20 percent load.

The Speed tab gives a very basic graph plot of throughput with thin plot lines. Its resolution in time can be switched so you can see traffic over the last 10 seconds, up to 1 day. In the Stats tab is the fine detail such as current protocol, available bandwidth, ping times and port numbers. It’s an invaluable resource. And finally Logs is a line-by-line record of connections and routes.

The program’s Settings allow fine tuning the setup – for example, to always connect when its launched, which protocol to use between UDP and TCP and which port number, or if to attempt an SSH tunnel over more versatile ports such as 22, 80 and 443. Proxies and Routes can be tweaked, while the really advanced user can delve into Advanced and Expert Mode settings which among other adjustments allows sending commands to OpenVPN Management Interface via the Logs window.

The crypography used by AirVPN is probably the best available, in common with some other companies but worth spelling out. There is 4096-bit RSA for the first exchange, which enables Perfect Forward Secrecy (PFS) through Diffie-Hellman key exchange. After the initial key negotiation, re-keying is performed every 60 minutes, and this value can be lowered by the user. The main data channel uses AES-256-CBC.