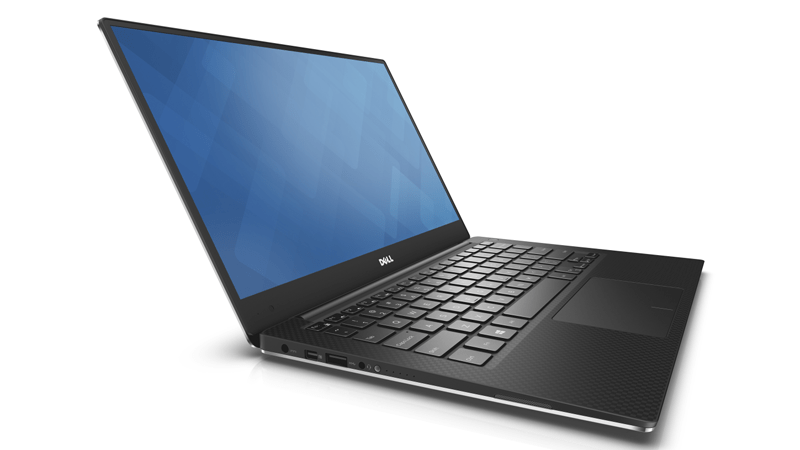 The 2015 Dell XPS 13 is a well built, compact laptop that outdoes the obvious competition in some key respects such as screen quality and near-borderless display. Here is a 13.3-inch laptop that takes up little more space than an 11.6-inch model. The new 9350 model adds a non-touchscreen full HD option to the range, and means prices are now more affordable.

The 2015 Dell XPS 13 stands as a shining beacon of hope in the world of Windows laptops. Read our Dell XPS 13 review to find out how Dell is making laptops (and Windows) sexy again. Also see: Best laptops 2015/16.

Update 15 December 2015: This review was originally written in March 2015 and was based on the 9343 model. Dell has updated it to the 9350, and since the changes are minor, we’ve explained what’s changed instead of creating a separate review.

All models come with a 6th-generation Intel Core (Skylake) processor and have Windows 10 Home pre-installed.

As we said in March, it has been a long time coming but laptops are starting to get sexy again. Without naming names, there are some notebook computers which already have plenty of style and thoughtful design, leaving Microsoft hardware partners to do the best they can to catch up.

In the XPS 13 9343 – where the added 9343 is the way to differentiate this new model from every XPS 13 that’s gone before it – Dell stole a march on the competition. It was the first to market with a near-borderless display. Nattily dubbed the InfinityEdge screen, it follows the idea of those millionaires’ hillside mansion pools, which appear like limitless lakes that stretch infinitely to the horizon.

The 13.3-inch high-resolution display here doesn’t quite go off into the sunset, but at around 5mm thick the bezel around the XPS 13’s screen is a refreshing change from the clunky fat borders that waste so much usable viewing area on every modern laptop.

In the new 9350 model, the design and build are exactly the same: the XPS 13 takes precision-machined alloy for both top and bottom sections. Carbon-fibre composite is not new for a Dell notebook, but here we see it applied right across the middle section, making up a top deck area in nicely figured woven material, finished with a smooth rubbery coat that feels more organic to the touch.

With the clamshell closed, the sandwiching effect means you’re toting nothing less than a silver ‘n’ black Bassett’s liquorice allsort. Only smarter than your usual confectionery.

Special mention goes to the XPS 13’s bottom, which is entirely bereft of all the usual Windows laptop nonsense – here you’ll find no seedy Genuine Microsoft stickers, Intel Inside warnings, strings of alphabet part numbers, dry regulatory notices, nor the oddly place trapdoors to the innards.

Instead, dead central is a small metallic plaque laser-engraved simply ‘XPS’. A tiny sliver is cut from one edge to allow your fingernail to lift it, thereby revealing all your essential part numbers and service codes. This door is magnetically secured, so it snaps shut cleanly when you’ve finished stocktaking.

Another neat design point is the use of two long rubber strips as bumper feet on the underside. These give a sturdy platform on the desk, with no wobble or likelihood of tiny feet falling off. Also see: Best ultraportable laptops 2015/16.

Ports and physical connectivity options are minimal, as we now find with most such ultraportables. There’s a USB 3.0 port on each flank; then DC charge inlet, Mini DisplayPort and headset jack on the left. An SDXC card slot, and what looks like a Kensington lock slot (but Dell calls a Noble lock slot) lie to the right. We understand the proprietary terms are now interchangeable.

Prising open the lid to get going could be easier, since there’s no sufficiently sized cutout in the body to push in your thumb or finger to separate lid from lower. Once you have successfully broken in, you find an all-black deck and screen – the former the carbon-fibre component, and the display an inky but glossy black expanse from edge to edge. Then, with the screen switched on, only a very small edge remains black. It’s almost unsettling, to be given so much gorgeously rich screen and so little frame; but then one wonders why all laptops aren’t made this way.

Where the Dell XPS 13’s screen does still disappoint is in its reliance on an overly narrow 16:9 aspect ratio. This entails unnecessary and constant scrolling up and down, just to read documents and web pages throough a needless letterbox cutout. There may be only around 5mm edge at sides and top, but Dell’s missed a trick with its 21mm of wasted bezel running right along the bottom of this screen, which could have been fruitfully filled by the simple expediency of using a 16:10 panel comprising 3200 x 2000 pixels.

One use Dell did find for the no-man’s-land strip was as home for a webcam, since the designers couldn’t find a way to slip a camera into the usual top-central bezel position. And unsurprisingly, this low-slung spyeye will mean that Skype chats involve people looking up your nose rather more than you may prefer.

There are two display types possible for the XPS 13. There is the insanely high-res 3200 x 1800-pixel touchscreen, an IPS panel made by Sharp, fitted to the 9343 model we tested in March. Also available in some territories – including the UK and Ireland is a model with 1920 x 1080-pixel display, and without the added touch-sensitive digitiser. This non-touch version was fitted to the 9350 we tested and offers longer battery life, lower weight, better balance, reduced price and a more consistent Windows interface.

If you’re considering buying a used 9343, the here follows the rest of our original review which should prove useful.

Memory is fixed at 8GB, with no option at present for more or less. And since it’s soldered to the motherboard, it’s 8GB for life. That ought to be enough for typical users of an ultraportable laptop, unless you run more memory intensive programs like virtual machinery or creative graphics.

Storage can be any size you like, so long as you like either 256 or 512GB. Our sample had a 256GB M.2 drive from Samsung, albeit still only SATA-connected so some way behind the state of the art.

The keyboard and trackpad both worked mostly well, excepting an issue with the apostrophe/double-quote key. This would sometimes fail to print a character, or else double print when pressed harder to make any mark at all. Quality control could be an issue here.

The trackpad was better than those found on many Windows laptops, if still short of the precise steering and control you’ll find a MacBook. The touchscreen worked as a touchscreen, with usual flex and wobbles in use.

Simple synthetic benchmark tests quickly established the new Dell XPS 13 to be a fast mover. In fact perhaps too fast, given the limited cooling strategies available to the design team with such a thin slice of a chassis.

Whether it was the integrated graphics working overtime to drive a higher number of pixels or just the intrinsic thermal envelope of the chip in too tight a space, we don’t know. But the XPS 13’s single fan was wont to rev into audibility for no apparent reason other than sitting on a desktop with the lid open. And that’s with the laptop set to its default Dell power saving mode in Windows Power Options.

If you work in a noisy office or are not troubled by fan noise, you can safely skip to the next paragraph. If you’re like us and are driven to distraction by unnecessary whining, be aware that thermal management is literally disturbing issue with this 2.4GHz product; perhaps even more so in the 2.6GHz processor model.

Cinebench 11.5 returned 1.39 points and 3.13 points, while Cinebench 15 gave 122 and 283 points, for single-core and multi-core processing. This puts the Dell XPS 13 in the same territory as Apple’s entry-level 13-inch MacBook Pro from last summer, which scored 1.31 and 3.15 points; and 113 and 280 points in Cinebench 15, respectively. But here we see the Dell clearly excelled in single-core performance.

One doesn’t normally expect to report any good news when it comes to Windows gaming on an ultraportable-class laptop. But applying Intel’s new tech, the Dell XPS 13 may be the first ultraportable where we can be satisfied that gaming is possible, and beyond the usual the lowest res/lowest detail caveat too.

You can forget about playing at native resolution, so the 5.76-megapixel panel is again wasted here. (We had to try anyway though, and saw almost laudable figures of 7-9 fps). But the Batman: Arkham City game showed that framerates of 40 fps were possible, and at High detail, playing at 1280 x 720 resolution.

In key respects, the 3200 x 1800 display passed with flying colours. Measured with a Datacolor colorimeter, it could stretch to 99 percent of the sRGB colour gamut, and 75 percent of Adobe RGB. Colour accuracy was very good, with Delta E values between 0.62 and 5.62, averaging 3.47, in a 48-colour test.

Contrast ratio was also quite exemplary for a notebook screen, reaching 710:1 at full brightness. The full brightness may be a little limited for some tastes and environments though – we couldn’t get any higher than 225cd/m2. That’s bright enough for us, but some like to use their laptop outside or in very high light levels where this display might get a little swamped by ambient light. Where Dell got its figure of 400cd/m2 we would like to know.

It didn’t show on our screen uniformity test, but we noticed a conspicuous bright line running down the right edge of the screen, which seemed to clearly indicate the source of the display’s edge lighting. Whether this is normal for this screen type is not known, but the bright line did spoil the effect of an otherwise great screen.

The internal flash storage proved averagely quick for its type, hitting sequential reads and writes of 493 and 238 MB/s respectively. Single-threaded 4 kB random reads and writes amounted to 21 and 46 MB/s, while peak IOPS was found with 32-thread reads at 88,900 IOPS.

‘Stay powered longer: With up to 15 hours of run time on the FHD display (and 12 hours on the QHD+), it’s leading the industry in battery life. Paired with the Dell Power Companion, you get up to to 22 hours and the freedom to power all of your bonus devices.’

Leading the industry it most certainly is not. Dell must secretly recognise that battery life is a problem for the XPS 13 9343 and so will sell you a 43Wh battery the size of a portable hard drive to supplement the one flagging inside.

That’s even smaller than the 52 Wh non-replaceable lithium-polymer battery built into the laptop, but it is possible you might get closer to 11 hours runtime if you add the Dell Power Companion too. It will cost you an additional £104.39 and 315g.