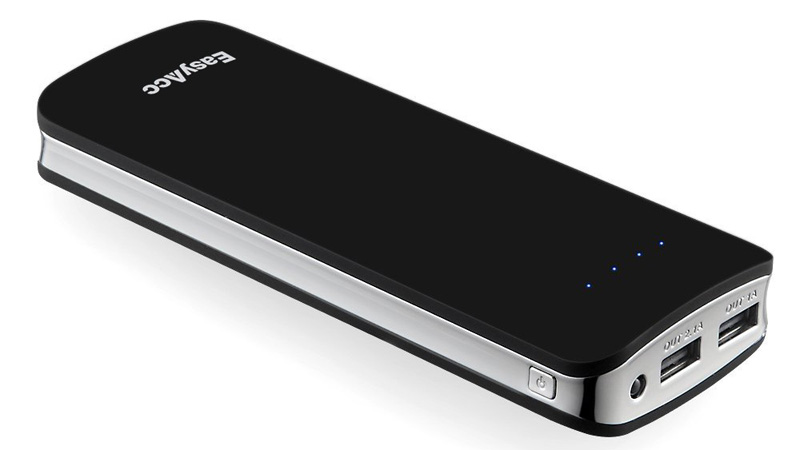 The EasyAcc PowerBank PB18000 is the best-value high-capacity power bank we’ve seen. While it lacks some features, it’s spot-on with the basics, charging your phone or tablet wherever you are and charging it fast.

In common with both the EC Tech models, this EasyAcc power bank has one USB output rated at 10.5W and another at 5W. Both are universal ports and can be used with any device that charges via USB, but EasyAcc recommends that iPad users make use of the faster port, while Samsung Galaxy Tab owners use the slower one. Despite its 5W rating, this latter port is able to smart-charge Samsung’s tablets, turbo boosting from its standard 1A to 1.3- or even 2A. EasyAcc doesn’t specify whether this port can smart-charge other devices, too. Also see: How to charge your phone or tablet faster.

With two outputs the EasyAcc has two fewer than its LimeFuel rival, but the difference here is it can simultaneously support both those ports at full-pelt. We also like the fact EasyAcc supplies two MicroUSB cables, one short at 20cm and the other offering a bit more wiggle room at 60cm. (If your device uses another connector, such as Lightning, you simply need to provide your own cable). Of course, the LimeFuel has other benefits to justify its significantly higher price tag, including passthrough charging (the ability to charge both phone and power bank at once) and improved battery efficiency.

Battery efficiency is a key concern for power banks. If not otherwise stated, as is the case with this EasyAcc PowerBank PB18000, you can usually expect around 70 percent efficiency. This sounds low, but it takes into account the loss of energy gobbled up by voltage conversion and the heat generated. With an efficiency of around 70 percent you can expect roughly 12600mAh to be available to power your USB devices. Exactly how many times that will charge your phone or tablet depends on the capacity of its own battery; an iPhone 6, for example, has a 1810mAh battery and would get around seven full charges from this power bank. Android phones typically have larger-capacity batteries, so would manage fewer charges. Also see: How to improve smartphone battery life.

The EasyAcc doesn’t support auto-on, and when plugging in your phone or tablet you must press the button on its side to begin charging. For completely flat batteries the lack of this feature can actually be useful. Although the company says that to prevent wastage it supports auto-off when your battery is full, we found this wasn’t the case with our HTC Desire Eye. However, if the EasyAcc were to accidentally turn on in your bank it will automatically turn itself off if no devices are detected within 60 seconds.

A black slab with rounded edges, the EasyAcc PowerBank looks good – as long as you don’t touch it too much. The fake Chrome surround is a magnet for fingerprints. It’s a perfect fit in the hand, with a rubbery-feeling matt finish that aids grip. Four LEDs on top show how much power remains, although with each representing a 25 percent chunk and so much power to hand it’s impossible to get an accurate reading. There’s also an LED flashlight at one end, a common feature in power banks, although it’s not especially bright.

It’s not as aesthetically pleasing as the LimeFuel, but the EasyAcc is significantly better-looking than both EC Tech power banks. It’s heavy, as you would expect from a bank of this capacity, but at 359g not nearly as much as its rivals.

The EasyAcc PowerBank feels tough and sturdy, while its various protections for overcharging, short circuiting and the like, plus a 12-month warranty, are reassuring. Also see: Best desktop chargers 2015.