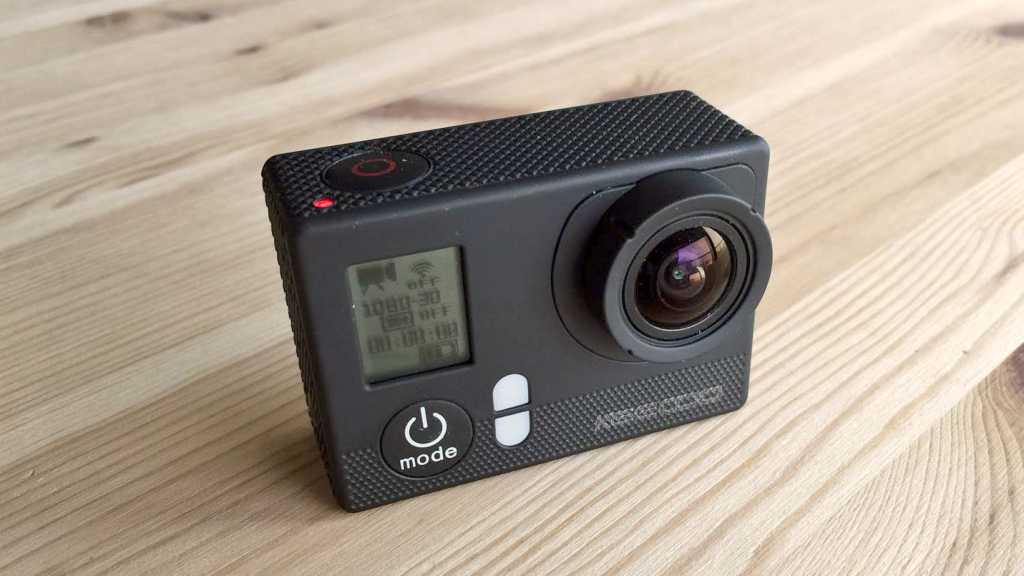 At a little over £60, the Keecoo WiFi Sports Camera is good value. It may not quite have the image quality of the latest GoPro, but it has Wi-Fi, supports FPV and has a long-lasting battery. It’s just a shame it doesn’t have a standard microUSB port and better quality audio. 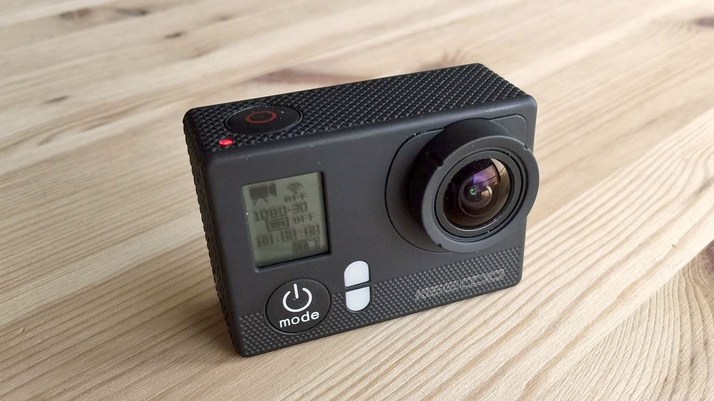 When you think of action cameras, only one brand springs to mind: GoPro. It dominates the market, but there’s plenty of choice if your budget doesn’t stretch to several hundred pounds. Here we review the Keecoo WiFi Sports cam that looks the same, but costs less than £65. ( Geekbuying supplied the camera for review, and you can get a discount of $10 by using the coupon code Keecoo at the checkout. This brings the price down to roughly £54, which is an even better bargain.)

Unless you look closely, it’s hard to tell the difference between the Keecoo and a GoPro Hero 3 or Hero 4, especially when in their waterproof housings. Even the packaging looks the same.

The only real difference is that, annoyingly, the Keecoo doesn’t have a microUSB port for charging. Instead it has a slightly smaller proprietary USB connector, which means you’ll have to be careful not to lose the cable provided.

Around the back is one more key difference: there’s no accessory port, so you can’t use any GoPro mounts – including gimbals – which require this connector. Because the Keecoo’s dimensions are basically the same, you can still use it in a gimbal or mount which doesn’t need to connect to that port.

In the box you get a range of accessories and mounts, including a bar mount and a couple of adhesive mounts for flat and curved surfaces. The quality of these is noticeable worse than proper GoPro accessories, but you’d expect that at this price. You can, of course, use genuine GoPro accessories with the KeeCoo. 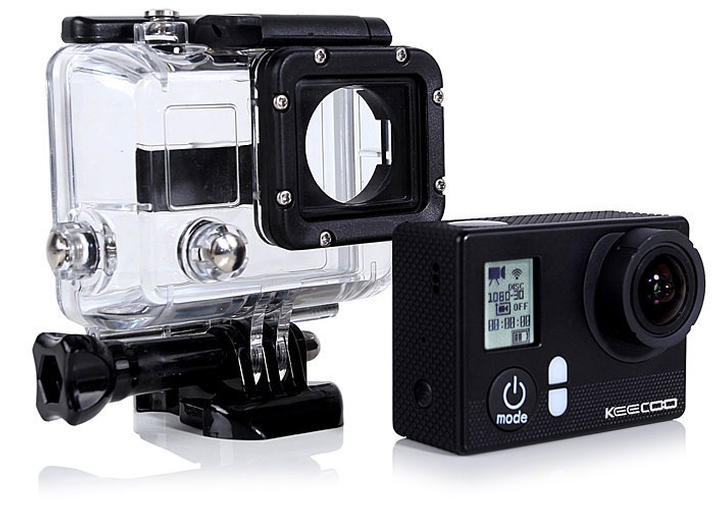 Wi-Fi is built in, and you can use a rudimentary app – available for iOS and Android – to remotely view the video feed, check your composition, start and stop recording and even review videos. The latter feature didn’t work well on our test phone – a 2nd-gen Moto G – playing the video for a few seconds, but then pausing and catching up a few seconds later. It’s best to use a card reader and transfer videos to your computer anyway, so this is by no means a deal breaker.

MicroSD cards up to 32GB are supported, and it’s worth buying a well-known brand’s Class 10 (or above) card to ensure video is recorded reliably.

The battery is bigger than you might expect at 1050mAh, and this gives up to 2.5 hours of recording at 1080p. Spare batteries cost around £5, and it’s well worth having at least one spare so you can carry on recording when the first runs out.

As is the fashion these days, there’s a choice of colours: black, silver and gold. This is just for the front plate: the sides and back are black on all models. 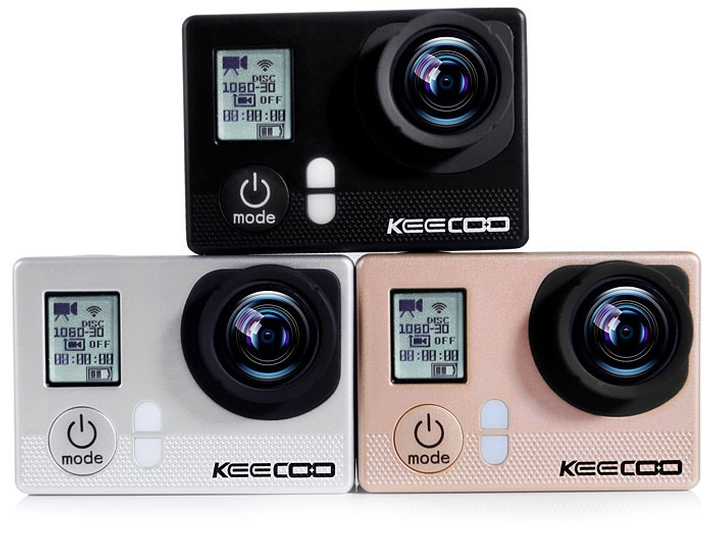 While the Keecoo looks identical to a GoPro, there are some noticeable differences in usability. For one, the LCD display isn’t nearly as easy to decipher. The menu font is an odd choice, and hard to read. However, once you’ve got the hang of using the three buttons to control it, you’ll be able to set options quickly and easily.

One missing option is the ability to flip the video 180 degrees, which is useful when the camera is mounted upside down. This means you’ll have to rotate footage in a video editor afterwards. Another annoyance is that it takes almost 10 seconds to turn the camera on and be ready to record.

When shooting with a GoPro, you rely on the loud beeps for confirmation of starting and stopping recording. The Keecoo’s quiet beep is barely audible when you’re not using the waterproof housing, and totally inaudible when you are. Red LEDs flash at the top and bottom to indicate recording, but there’s nothing front or back.

Video quality, arguably the most important aspect of any action camera, is very good for the price. The AIT 8427 chipset does a decent job, and the lens is quite sharp too. Despite the reasonable 16Mbit/s data rate, heavy compression means there’s a lack of detail in textures, but overall, you won’t be disappointed with the clarity you get for the money.

Colours are accurate – perhaps a little too saturated for some tastes – and changes in exposure are fairly fast and not too distracting. Note that unlike some rivals, there are no image adjustments available through the menus: you can’t change the metering, white balance or exposure correction.

The other bad news is that audio is poor. Even without the housing, audio is quiet and sounds quite muffled – no surprise given that it’s recorded at 32kbit/s and at 16kHz. In the waterproof case, it’s even worse.

At 75g, the Keecoo should make a good budget option for anyone wanting to attach a better-quality camera to their quadcopter, and it even supports video output while recording so you can use it for FPV.

Plus, if you want to use it as an in-car dashcam, you can set the clip duration to 1, 3 or 5 minutes.