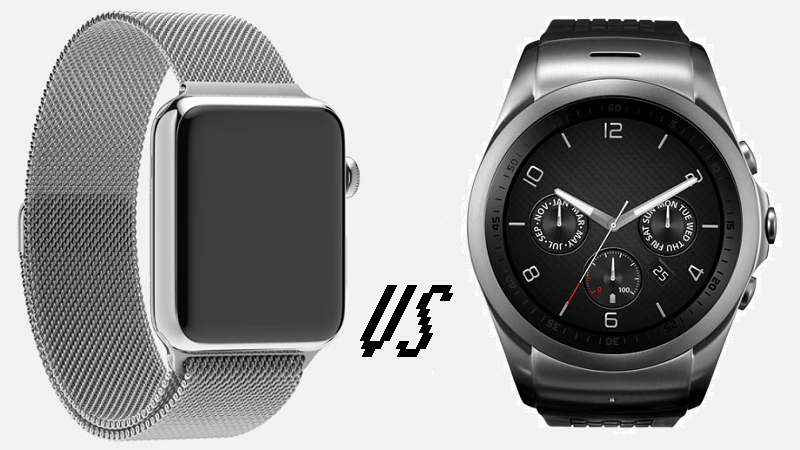 There are really three watches here since the Urbane LTE runs LG’s own software and doesn’t even need a smartphone to work. A lot will come down to design and whether you use an iPhone or Android due to compatibility.

2015 is the year of the iWatch but Apple has some competition in the  smartwatch market and LG is one manufacturer it has to tackle.  See how their latest devices stack up in our  Apple Watch vs  LG Watch Urbane. comparison preview. Read: The best smartwatches.

Apple first showed off the Apple Watch last year but recently announced more concrete details at its Spring Forward event which took place just days after MWC 2015 which is where LG unveil the Watch Urbane, its new premium smartwatch.

This is a preview because we’ve had some good hands-on time with the LG Watch Urbane wearables but not the Apple Watch.

On the surface, there’s no difference in price between these smartwatches on price with both available at £300. However, that’s just the cheapest price for the Apple Watch in the Sport edition. The regular model starts at £479 and the premium edition will set you back at least £8,000. The most expensive is £13,500.

Note that there’s also an LG Watch Urbane LTE which sounds like the same watch with added 4G support and while it’s similar, the device is also different in quite a few ways. There’s no price for it yet but we expect it to but more expensive than the regular model.

Coincidence or not, we’ve seen a number of more premium and luxury designs appear since Apple first unveiled the Apple Watch. One of the main difference here is the fact the Apple Watch is square and the LG Watch Urban (and LTE model) is round.

A smartwatch is as much a fashion item as it is a gadget so choosing one you like the style of and are happy to wear is critical. It’s a very personal purchase.

Choosing an LG Watch Urbane shouldn’t be too hard as it’s simply available in silver or gold colours. They’re both pretty bling in appearance with polished metal while the Urbane LTE has a more muted matte finish.

Deciding on an Apple Watch is a much bigger task with a total of 38 different combinations of body and strap. This includes two different body sizes (38- and 42 mm height), three different modes, various colours and a large selection of straps. Read: How to choose your Apple Watch – The complete buying guide.

LG hasn’t given weights for the new smartwatches yet but we do know the Watch Urbane will be 10.9 mm which is a little thicker than the Apple Watch which is 10.5 mm. The latter will weigh between 40- and 69 g depending on the size and model.

While the Apple Watch is splash proof, the LG Watch Urbane devices are full IP67 certified so are dust- and water resistant.

Touchscreens aside, you can interact with the Apple Watch using the digital crown which sits on the right-hand side of the body. LG has gone for a simple power button on the side of the Watch Urbane while the Urbane LTE has three physical buttons for interaction.

In terms of hardware, the LG Watch Urbane matches almost all other Android Wear devices. This means it packs a 1.2 GHz Qualcomm Snapdragon 400 processor, 4 GB of intern

The Cupertino company uses its own S1 chip for the Apple Watch and has double the amount of storage at 8 GB. However, the details reveal you can only use 2 GB for music and just 75 MB for photos. As per usual, Apple doesn’t quote RAM.

All the watches were looking at here have a heart rate monitor which resides on the back and various sensors such as an accelerometer to track activity. Each uses Bluetooth to connect to a smartphone but the Apple Watch also has Wi-Fi on-board and the Urbane LTE, as the name suggests, is the first smartwatch with 4G so you don’t even need to connect it to a smartphone to make calls or use data.

LG has kept the same screen from the  G Watch R in both LG Watch Urbane models so no matter which you pick you’ll get a 1.3in round P-OLED display with a 320 x 320 resolution resulting in a 245 ppi pixel density. Apple’s is simply quoted as Retina.

On battery life, Apple claims up to 18 hours of varied use which then drops to 6.5 for audio playback and just three for phone calls. LG has fitted the Watch Urbane with a 410 mAh battery and the LTE model has a larger 700 mAh cell. It simply says the Urbane LTE ‘delivers impressively long talk and use times and can go for days in standby mode’ without quoting numbers.

Prices, screen shapes, designs are all important but software is a massive difference here – even between the Watch Urbane models.

A lot will depend on what smartphone you use as the Apple Watch is understandably only compatible with iPhones (iPhone 5 or later). With Android Wear onboard, the LG G Watch requires an Android device to partner with (version 4.3 or later) – although Google is reportedly working on adding iOS support.

The LG Watch Urbane LTE doesn’t run on Android Wear, instead the firm has installed its own software which it calls ‘LG Wearable Platform’ and is based on webOS. As mentioned earlier it doesn’t need to be paired with a companion device to work thanks to its mobile connectivity. At the moment it’s only compatible with Android if you do pair it but iOS support is possible for the future.

Although the features are largely the same across all the three platforms, the user experience will differ greatly.

Google’s Android Wear uses the card system which you may be familiar with on Google Now so will show information when it deems it appropriate. You can also interact with it by asking questions and install specific apps if you like.

You can use the Apple Watch in a similar fashion to a phone loading up apps when you need them. Pre-loaded apps include Messages, Phone, Mail, Calendar, Activity, Workout, Maps, Passbook, Siri, Weather and Photos. A bonus is the ability to use the Apple Watch to make contactless payments via Apple Pay and check into flights, hotel rooms and similar with supported partners.

Meanwhile, the Urbane LTE has the LG Wearable Platform which is closer to the Apple Watch interface than it is with Android Wear. You can install apps and use them for all kinds of things including activity tracking and making calls without a smartphone. It’s likely to have fewer available apps to the others since it’s essentially a brand new platform.