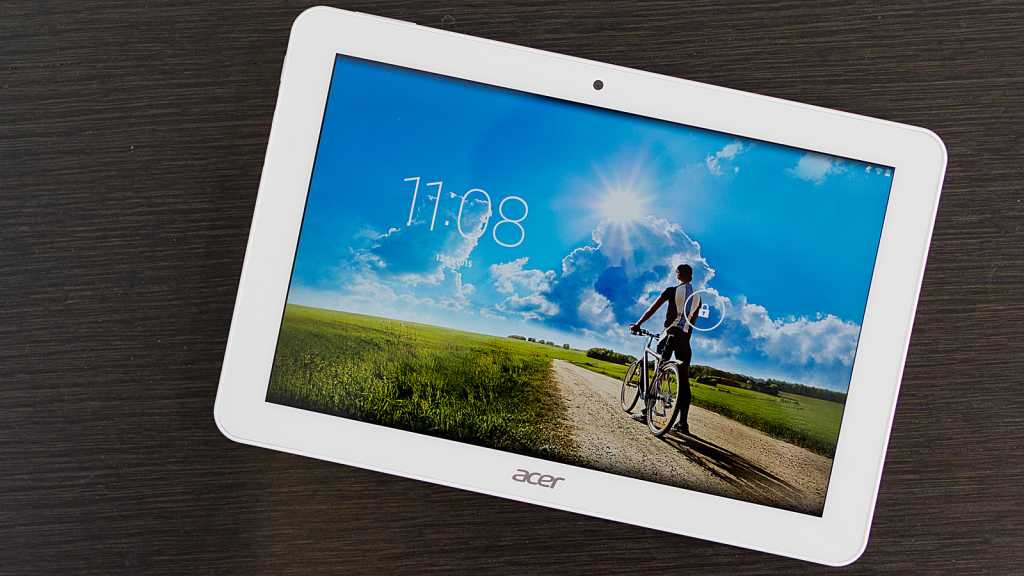 There’s little to get excited about with the Acer Iconia Tab 10 but that’s fine with a very affordable price tag of £179. It’s plain in appearance and quite heavy but apart from a few too many pre-loaded apps, the tablet offers good performance and decent storage plus a handy microHDMI port. Overall it’s a good choice if you’re looking to spend under £200 on a large Android tablet.

The amount of new 10in tablets hitting the market has slowed down recently but Acer is one firm pushing on with updated models. Here’s our Acer Iconia Tab 10 review. See also: Best 10in tablets.

You can normally rely on Acer to provide tech products with cheap price tags and the Acer Iconia Tab 10 is no exception. For a full-size tablet, the asking price of £179 is more than reasonable. It’s cheaper than tablets like the Google Nexus 9 but it does have some competition.

It’s not particularly a surprise that the design of the Iconia Tab 10 is basic and plain while the build quality is also simplistic. The volume rocker sits on the top while the power button and ports reside on the left side. The microSD card slot isn’t covered up so it does look a little ugly here.

This is a typical 10in tablet designed to be used in landscape mode and only comes in a white colour option which is bit strange. The back of the tablet is a silver colour which doesn’t really even look like imitation aluminium. There’s a fairly chunky bezel around the screen which doesn’t make it look very attractive but does mean you can hold the tablet without your fingers getting in the way of the display.

It’s fairly thin at 8.9 mm which is good to see for a cheap tablet but it is a hefty 520 g so despite the bezel, you won’t want to hold it for too long – especially one-handed.

Powering the Iconia Tab 10 is a MediaTek MT8127 processor which is clocked at 1.3 GHz and is quad-core. Behind it is 1 GB of RAM and we’ve found performance to be slick considering the price. Calling the recent apps menu and quitting back to the homescreen is surprisingly speedy. Scrolling is smooth too but some apps can take a little time to load.

Below are our benchmark results which generally match its Lenovo branded rival, but it’s the middle score which stands out. 13 fps in the graphics test is impressive and is only 1 fps off the far more expensive Samsung Galaxy Tab S devices.

Inside is a decent 32 GB of storage to play with which is double what we’d expect for the price and around 25 GB is available after the OS and pre-loaded content (see software). There’s also a microSDHC card slot for adding up to 32 GB more if you wish.

As you can guess from the name, the Iconia Tab 10 offers a 10.1in screen which uses a 16:9 aspect ratio designed to be used predominantly in landscape orientation. At this price point it’s understandably a TFT panel and uses a WXGA resolution of 1280 x 800. Read: Best 8in tablet 2015.

So don’t expect good viewing angles while a pixel density of 149 ppi is nothing to get excited about so don’t anticipate a crisp image either. The screen is perfectly usable but isn’t exactly high quality (which is fine for the price).

Equally uninspiring are the front and rear cameras which are rated at 1 Mp and 4 Mp respectively which produce ok but nothing more photos and video.

Wireless connectivity is basic with 802.11b/g/n Wi-Fi and Bluetooth 4.0 but alongside the usual headphone and microUSB ports is a potentially handy microHDMI port meaning you can connect the Iconia Tab 10 to your TV or a PC monitor easily. A cable isn’t provided, though.

Battery life is important for any smartphone or tablet and Acer has fitted the Iconia Tab 10 with a 21.6 Wh Lithium-ion battery. In our new battery test (explained below) from Geekbench 3, we recorded a result of eight hours and 52 minutes which is a good effort. The battery score was 2372.

The Geekbench 3.3 battery test aims to give a fairer indication of battery life across different devices. It measures the battery life of mobile devices by running a processor-intensive task until the battery has entirely discharged.

Besides the runtime figure we also gain a battery score figure which indicates how much work the device performed while under test. This is related to, but not quite the same as the usual Geekbench performance score (seen in the above table). If two smartphones or tablets show the same runtime but different scores, for example, the device with the higher score completed more work tasks in the same time.

This Battery Score result helps ensure that a manufacturer does not simply set its device to underclock or use other processor power-saving techniques while undergoing this test, in a bid to garner exaggerated battery life results.

When it comes to software, the Acer Iconia Tab 10 runs on Android 4.4 KitKat. Acer has confirmed it will be upgraded to version 5.0 Lollipop but has given no time frame for it.

For now, the user interface is largely stock Android – as Google intended it to be – so you get the KitKat recent apps menu and dual drop down bars (one for notifications and one for quick settings).

That’s a good thing and you can, of course, customise the homescreen panels which your favourite apps and widgets. Acer does add some content though including a Touch WakeApp which enables you to launch an app of your choice or simply the homscreen with a five-finger touch of the display.

Similar to Sony, there’s also something called the ‘Float Gadget’ which gives you a small windows including a calendar, calculator and memo pad – see above.

Those features are pretty handy but what we’re not so impressed with is the amount of pre-loaded apps which is similar to buying a laptop and finding bloatware on it. There are a number of Acer’s own apps, Amazon ones plus others such as Evernote, Skype, OfficeSuite, TuneIn Radio, Zinio and McAfee Security.

It’s a long list and might save you the bother of downloading an app you want anyway but we think it’s better to simply choose what you want rather than the decision being made for you. It also takes up valuable storage space and the real kick in the teeth is that most of them can’t be uninstalled.