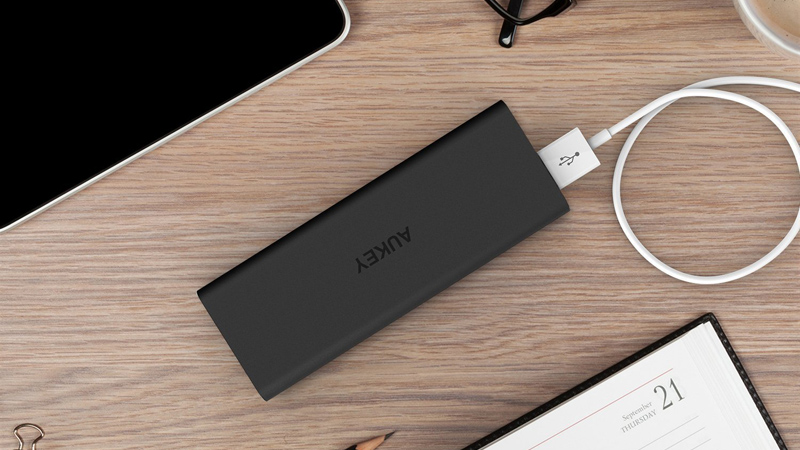 We say iPhone users; actually this power bank will charge any phone, tablet or other USB-powered device, you simply need to supply your own USB cable. But the Aukey refills its own battery over a Lightning rather than Micro-USB connection, and we know of few Android– and Windows Phone users who have spare Lightning cables lying around (one is not supplied in the box, which is no surprise given that Apple charges more for a Lightning cable than this power bank costs, just £8.99 at Amazon).

Particularly the iPhone. Aukey doesn’t state its battery’s efficiency, but with most offering around 70 percent (some is lost through heat generated and voltage conversion), you can expect around 2500mAh. That’s not enough to completely fill an iPad’s battery, but it would fill an iPhone 5 (1440mAh), iPhone 5c (1507mAh) or iPhone 5s (1570mAh) around 1.7 times, an iPhone 6 (1810mAh) around 1.5 times, and it would give an iPhone 6 Plus (2915mAh) just under a full charge.

The LED will go through various colours while charging to show you how much power remains: white means more than 60 percent; green is between 20- and 60 percent; and red is below 20 percent.  Also see: Best MiFi 2016.

The battery tech inside this power bank supports auto-on/-off, too, so you can plug it in and leave it be: it’ll automatically switch off when either it or your iPhone’s battery is full, with no unnecessary wastage.

Note that this Aukey power bank will charge your iPhone faster than it will fill its own battery. That’s because it has a 7.5W input and just a 5W input. Apple’s own iPhone charger is rated at just 5W, but if fast charging is what you need then you should note that some power banks offer up to 12W via USB. (Charging your iPhone at more than 5W will not hurt its battery.) Also see:  how to charge your smartphone or tablet faster.

Leaving the tech aside, the Aukey 3600mAh External Battery Charger is a nice-looking device. It’s built from matt black plastic, with rounded edges and a very slim (12mm) and light (85g) design. There’s just a single output, but at this capacity a second output would be pointless.

Aukey supplies a soft carry case if you’re throwing the External Battery Charger into a bag, but you’d hardly notice this thing in your pocket. Intriguingly it also supplies a lime green suction pad, and we have no idea why.