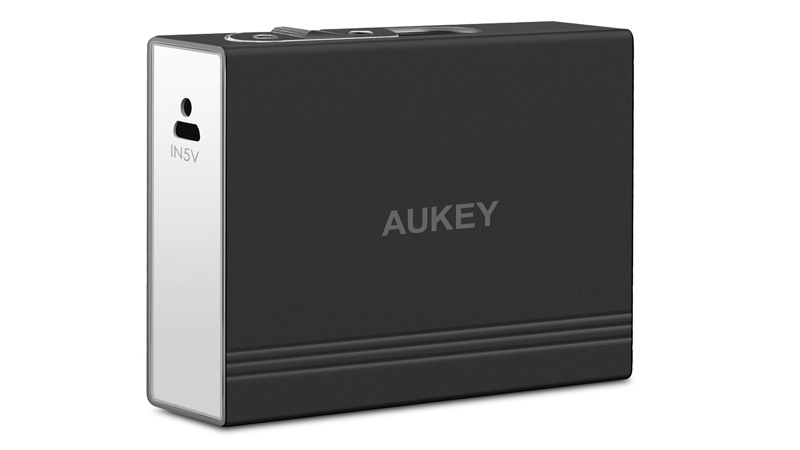 Aukey’s 2-in-1 External Battery and Cigarette Lighter is a cool gadget for smartphone carrying smokers. Even if you’ve ditched that dirty habit this fast-charging power bank is easily pocketable and offers great value, given the amount of power it provides.

Now this what we call a gadget: this pocketable power bank from Aukey charges your phone or tablet and lights your fags. Read our Aukey 2-in-1 External Battery and Cigarette Lighter review. Also see:  Best power banks 2018.

When Aukey got in touch about its latest power bank we had to take a look. Fire and batteries – you’re not supposed to put those together, right?

Well you can take peace of mind from the fact there’s no open flame here. You slide across the button on the top of the External Battery to reveal a thin wire coil, which instantly heats up and within a second is glowing and ready to light your cigarette. Also see: Best MiFi 2016.

From a full charge Aukey says you can light around 240 cigarettes from the 7W element. That’s assuming it takes 30 seconds to light each cigarette, so we’d suggest you’ll actually get many more.

Unlike a flame, this heated element is windproof, making it ideal for use in the big outdoors. That’s where the other element of this gadget comes into play, too. When you’re miles from a power socket and your smartphone’s on its last legs, a power bank such as the Aukey External Battery and Cigarette Lighter can get you through the day. Also see:  how to charge your smartphone or tablet faster.

Aukey doesn’t list the efficiency of its 4400mAh battery, but with most averaging 70 percent (some is lost through heat generated and voltage conversion) it could offer just over 3000mAh to power your mobile devices. That’ll provide most recent Android phones with at least one full charge; iPhones and lower-end devices potentially two. (Check the spec of your phone’s battery to work out what you can expect.)

Pleasingly the Aukey offers a fast charge for your phone (it’ll work with tablets and other USB-powered gadgets too, but the capacity is best suited to a smartphone). Both the MicroUSB input and USB output are rated at 10W (5V, 2A), which may be twice the power of your standard smartphone charger. Rest assured this faster charge won’t damage your phone, with its battery drawing only what it requires. Given a 10W charger it will also refill its own battery in as little as 2.5 hours.

The Aukey External Battery and Cigarette Lighter offers great value at just £12.99 from Amazon, particularly given its primarily metal build. The two end pieces are made from plastic, which we did notice easily scratched in our tests, but on the whole it looks good.

At 145g and 73x21x52mm the Aukey External Battery is large and heavy for a cigarette lighter (about twice the size of a Zippo), but for a 4400mAh power bank it’s extremely pocketable and very well sized. We’ve seen bulkier devices that offer less power.

It lacks some of the features of more expensive power banks. Aukey says that although it will support passthrough charging (allowing you to simultaneously charge it and a smartphone), it doesn’t recommend doing so. There’s just the one output, which is fine for a dedicated smartphone charger, but the lack of an LED torch is notable in such a device. Neither does it come with a carry case, but of course one would only get in the way of a smoker’s desperate need for nicotine.

A single LED is used to show how much power remains: when blue there is between 20- and 100 percent; when red it is below 20 percent. No other information is given on its status.