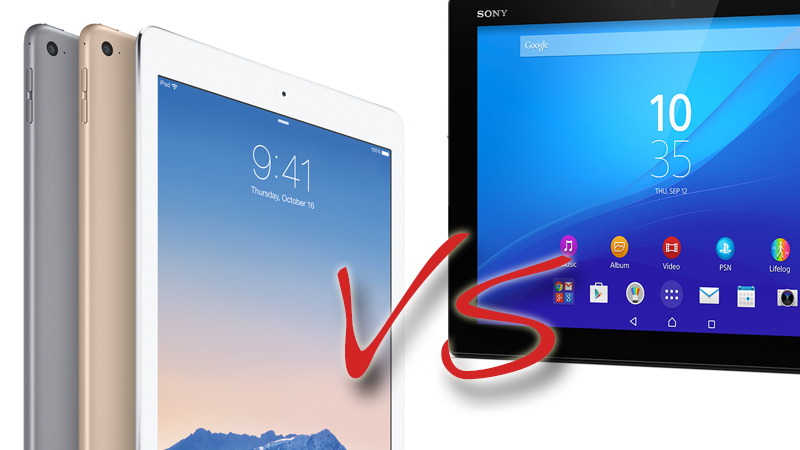 Apple and Sony have both designed and built brilliant tablets here, and it’s a tough decision between the two. The Xperia Z4 Tablet has some obvious bonus points thanks to its waterproof nature, its better screen, its lighter weight, its battery life and its good front-facing camera, but we’re not as keen on the overall design of the tablet, and if £499 does turn out to be the starting price it’s a bit on the expensive side. We’ll update this comparison with a solid verdict when we’ve spent more time with the Xperia Z4 Tablet and carried out all of our benchmark tests. For now, though, let us know in the comments below which tablet you’d prefer and why.

Sony didn’t launch a new smartphone at MWC 2015 in Barcelona this year, but it did unveil a new iPad Air 2 rival in the form of the Sony Xperia Z4 Tablet. Here, we put the two flagship tablets head-to-head to find out how they compare in our iPad Air 2 vs Sony Xperia Z4 Tablet comparison article.  Also see: Best new tablets coming in 2016.

First things first, let’s take a look at how much these tablets will cost you, and how you can go about buying one.

We were surprised by the high price of the Sony Xperia Z4 Tablet. We had predicted a £399 price tag, but Sony has now revealed that it’ll cost £499 when it becomes available to buy in June.

So far, £499 is the price Sony has revealed for the WiFi-only model with 32GB of space and it comes with a keyboard, so it’s possible that you’ll be able to pick up the Xperia Z4 Tablet at a lower price without the keyboard. The 4G version is £579 with the keyboard.

The new Xperia Z4 Tablet is even thinner than its predecessor, the Xperia Z2 Tablet, at 6.1mm compared with 6.4mm. The same goes for the iPad Air 2, which matches the 6.1mm of the new Sony tablet, reduced from the 7.5mm of the original iPad Air. So both of these tablets are exceptionally thin.

They’re light, too. The WiFi model of the Xperia Z4 Tablet is 392g, while the 4G LTE model is 396g. That’s actually a fair bit lighter than the iPad Air 2, which is an already light 437-444g depending on the model. Both are a delight to hold, but it’s particularly impressive that Sony has managed to make the Xperia Z4 Tablet so light, especially considering its display is bigger than the iPad Air 2’s.

The Sony tablet also trumps Apple’s when it comes to durability. It’s waterproof up to the highest rating available: IP68. The headphone port and microUSB ports don’t even need covers to make the device waterproof, so feel free to use the Xperia Z4 Tablet in the bath or by the poolside without a worry.

You won’t want to do that with the iPad Air 2, which certainly isn’t waterproof.

The iPad Air 2 is undoubtedly more stylish, though, with a brushed aluminium, unibody chassis, available in Gold, Silver and Slate Grey.

There are pros and cons to both of these tablet’s designs, so it could come down to a choice between practicality and style.

Inside the Sony tablet is a Qualcomm Snapdragon 810 processor, which is both octa-core and 64-bit. It’s paired with 3GB RAM, 32GB of storage and a microSD card slot for adding up to 128GB more.

The iPad Air 2, on the other hand, boasts Apple’s own 64-bit A8X processor and M8X co-processor, paired with 1GB of RAM and a choice between 16GB, 64GB or 128GB of internal storage. It lacks the microSD card slot found on the Xperia Z4 Tablet, though, so you’ll need to decide how much storage you think you’ll need when you buy it.

We’ll bring you more detailed information about how these two tablets compare in terms of speed and graphics performance as soon as we get the Xperia Z4 Tablet back to our labs for benchmarking.

The iPad Air 2, meanwhile, also sports 11ac WiFi and Bluetooth 4.0, optional 4G connectivity is available too. But there’s no NFC in the iPad Air 2.

The iPad Air’s additional feature that the Sony Xperia Z4 Tablet lacks is the TouchID fingerprint sensor, housed beneath the Home button. You can use it to unlock the tablet, unlock certain apps and also use Apple Pay online.

We’ve not yet been able to test this claim, but Sony suggests that you can expect a whopping 17 hours of video playback from the Xperia Z4 Tablet’s 6000mAh battery.

That’s compared with Apple’s 10 hours for the iPad Air 2, so is particularly impressive.

On the rear of the Xperia is an 8.1Mp camera, which uses Sony’s Exmor RS sensor. The front-facing camera is a 5.1Mp camera with a wide angle lens, which will allow you to get more people in the frame.

On the iPad Air 2, you’ll find an 8Mp iSight camera on the rear, which we’ve found to be quite impressive even though we think using a tablet as a camera is a  major no-no. The front-facing camera is 1.2Mp but does the trick for FaceTime calls, for example.

Not everything is as black and white when it comes to software, as it’s often more about opinions than it is about facts. You probably already know whether you prefer Android or iOS, and there are arguments for and against both operating systems.

The iPad Air 2, of course, runs Apple’s iOS 8. You’ll get Apple’s apps and services including FaceTime, iMessage, iCloud, Continuity between your other Apple devices including Macs, access to the enormous iOS App Store, iBookstore, Newsstand and more.

The Sony Xperia Z4 Tablet is instead running Android 5.0 Lollipop, Google’s latest version of its operating system. Sony has added its own interface, though it’s not much different from stock Android aside from the pre-loaded Sony apps such as Walkman, Album, PlayStation and Lifelog.

There’s also PS4 Remote Play, which lets you play PlayStation 4 games on the device from the console over the same WiFi network.