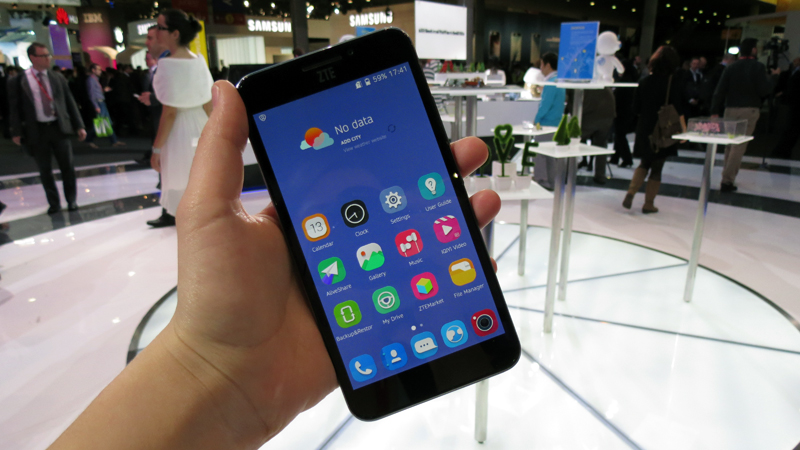 It’s interesting to see a new development in mobile security being implemented in ZTE’s Grand S3, but it’s certainly not the most ideal or practical feature, and it’s essentially the only thing that makes this smartphone stand out from the crowd. That said, its specs make it a good all-rounder that, should it make its way to the UK, could attract some intrigued buyers thanks to the Eyeprint ID.

ZTE’s Grand S3 was the star attraction at its stand at MWC 2015 in Barcelona, attracting crowds mainly looking to try out the feature that allows you to use your eyes as your password. We went hands-on (and eyes-on) with the new smartphone to bring you our ZTE Grand S3 hands-on review.

The ZTE Grand S3 has a smooth plastic back with a metal frame, which helps make this smartphone look and feel great. It’s not pretending to be a high-end, premium smartphone, but there’s also nothing about it that screams budget or cheap.

It’s not too thick or chunky at 9.8mm, and felt light and comfortable to hold during our testing. The rear camera does protrude from the rest of the smartphone slightly, but we quite like the symetrical design on the back as shown below.

The Grand S3 is a large smartphone that almost crosses into the phablet category with a 5.5in screen. That display is an IPS LCD with a resolution of 1920 x 1080, so that’s the same pixel density as Apple’s iPhone 6 Plus at 401ppi, and we’re impressed.

Inside the Grand S3, you’ll find a Snapdragon 801 chip with a quad-core Krait 400 CPU clocked at 2.5GHz, paired with 3GB of RAM and boasting Adreno 330 graphics. That should make this smartphone pretty zippy, and during our time spent with the device we had no lag when switching between applications or launching apps, but we’ll need to wait until we’ve got it back to our labs for full benchmark testing to find out how it really performs in comparison with rivals.

You’ll get 16GB of built-in storage, but that’s expandable thanks to the microSD card slot.

When it comes to connectivity, the Grand S3 offers 4G LTE connectivity as well as 802.11ac WiFi. There are two SIM card slots, and Bluetooth 4.0.

The battery is 3,100 mAh, and thanks to the removable back cover it’s replaceable.

The cameras on the Grands S3 are impressive, with a 16Mp rear-facing camera with a dual LED flash, and an 8Mp front-facing camera for selfies, but also for that cool eye-unlocking feature we’ve mentioned and will go into more detail about below. Both cameras seemed to capture impressive photographs during our testing.

The camera’s Pro mode allows you to tweak your settings to capture better photographs. You can adjust the ISO, white balance and more.

The stand-out feature of the ZTE Grand S3 is the Eyeprint ID feature, which allows you to unlock the smartphone using just your eyes, a bit like the way fingerprint sensors allow you to use just your finger to unlock smartphones including Samsung’s Galaxy S6 and the iPhone 6.

The new biometric authentication technology comes from American company EyeVerify, which uses the front-facing camera to identify blood vessel patterns in your eyes.

It’s interesting, that’s for sure, and certainly attracted our attention. However, in reality, using your eyes to unlock your smartphone isn’t very practical, and is much more fiddly and awkward than simply using your fingerprint.

To use the feature, you swipe down from the top of the lock screen and then line your eyes up with the green line shown on screen. If it recognises you as a match, you’re in, but the scanning time is a good few seconds and you’ll need to hold the smartphone in a particular way in front of your face for it to work.

It does work well, though, and even if you’re wearing glasses which we were pleased to see. If it’s too dark, of course, it’s unlikely that the Eyeprint ID technology will work because it needs to be able to see your eyes, and ZTE hasn’t included a front-facing flash to solve that issue.

The technology does get better and more secure you move it, though, each time capturing more information about your eyes. Right now it’s only used to unlock the smartphone but ZTE plans to use it for mobile banking and other applications in the future, too.

The Grand S3 is running Android 4.4 KitKat, with ZTE’s My Favourite UI user interface, which is colourful and fairly simple, with the use of folders rather than an app drawer. There’s no sign of an Android 5.0 Lollipop update just yet, though.

ZTE’s Grand S3 is currently only available in China at a price of 3000 yuan, which translates to around £310, but the company has said that it plans to bring the smartphone to other parts of the world later in the year.