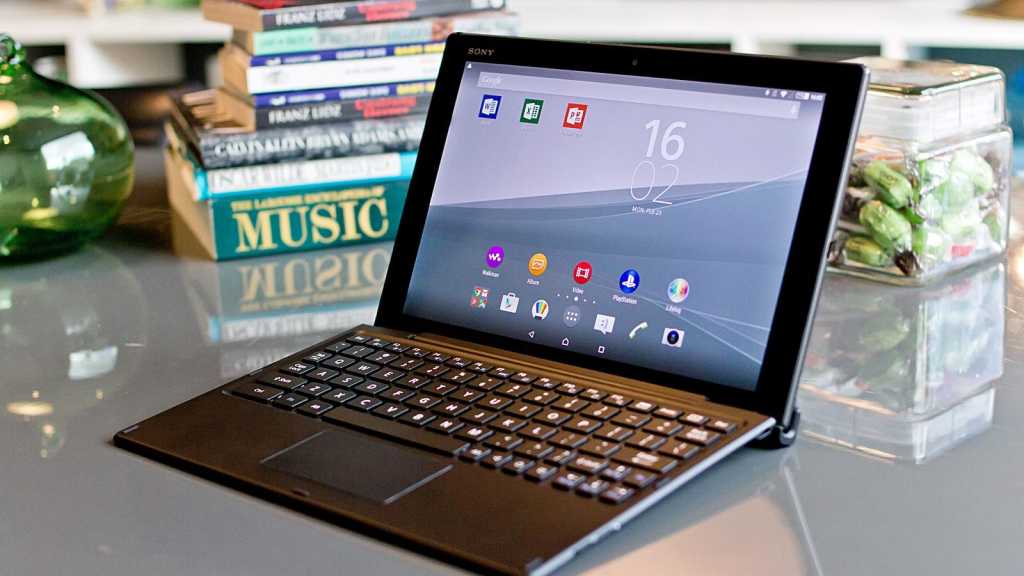 The Sony Xperia Z4 Tablet is a seriously impressive device and easily one of the best tablets we’ve ever tested. The design is astonishingly thin and light and the waterproofing with only the need for one cover is a bonus. This topped with excellent hardware, performance and software means we can barely fault it. However, the fact Sony bundles it with the Bluetooth keyboard with no option to buy it alone means that it’s more expensive than rivals. We feel it’s a 9/10 products but we’ve no choice but to mark the value score lower.

This year Sony has updated is flagship Android tablet so we have a new  iPad Air 2 rival. Sony claims it’s the world’s lightest 10in tablet with a 2K screen so here’s our Sony Xperia Z4 Tablet review. Updated on 28/7/15 with our video review. Also see: Best tablets 2015.

Last’s years Z3 range included one tablet which was Sony’s first smaller size, the 8in Z3 Tablet Compact. Instead of replacing that range – which also has the Z3 and Z3 Compact phones – Sony has added to it with the Xperia Z4 Tablet. It’s a new 10in device which succeeds the Xperia Z2 Tablet so there is no Xperia Z3 Tablet in a 10in size. Also see: Best new tablets coming in 2016.

We expected the Xperia Z4 Tablet to come in at £399 matching the iPad Air 2 but it costs £100 more than that. Before you panic and run to the Apple store, this is because it comes with the Bluetooth keyboard dock so there is a reason for it.

Sony’s main Android rival for the high-end 10in tablet is Samsung’s Galaxy Tab S which was £399 but can now be purchased for under £300. It’s a long way from being old and decrepit too, so represents quite a saving in comparison to Sony’s new tablet.

The more expensive model with additional  4G LTE connectivity will set you back £579 placing it only £60 short of the Microsoft Surface Pro 3 which it is competing against considering the laptop style keyboard dock.

It’s a real shame Sony has decided to only sell the tablet this way as many consumers will no doubt want just the tablet and it’s not like you can sell the keyboard because other users will have one as standard. Retailers are saying the keyboard is free but it’s clearly factored into the price and we hope Sony changes its mind in the future.

Its predecessor was and still is an impressive tablet and we didn’t think Sony could do much to the 6.4 mm, 426 g chassis. However, it has managed to slim it down further to 6.1 mm which isn’t much but the weight has dropped to just 392 g.

In comparison with the market leading iPad Air 2, it’s the same thickness and a decent 45 g lighter so tops marks to Sony. The Xperia Z4 Tablet feels great in the hand with the weight particularly making it easy to handle. The firm calls it the ‘World’s lightest 10in tablet with brightest 2K display’.

Sony continues to offer dust- and waterproofing, this time to an IP68 rating which is the highest available. We’ve got used to the headphone port not needing a cover or flap to keep the moisture out but now the microUSB port doesn’t either which is a great addition. Only having one flap for cards is ideal as you rarely need to open it.

Aside from the above changes, the design remains essentially the same. A reasonable bezel runs around the display which doesn’t look great but means you can hold any side without needing to touch the screen, leaving your fingers in the way.

The Xperia Z4 Tablet will be available in black and white options but we’ve only seen black listed at retailers so far.

What we thought was an optional Bluetooth keyboard dock (BKB50) is now bundled with the tablet in the UK. It supports tilt and a trackpad for what Sony calls a ‘premium laptop experience’. The Xperia Z4 Tablet slots in easily and then you can adjust the angle or close it like you would a regular laptop.

It all works pretty smoothly and there’s a limit to how far back you can tilt the tablet so it doesn’t topple over (unlike the Acer Aspire Switch 10). The keyboard is a little flimsy and the keys are small so it’s not the optimum experience but you can certainly get a reasonable amount of typing done without pulling your hair out. The trackpad is surprisingly good and using Android with a mouse cursor actually makes a lot of sense.

Some things are awkward but there are many keys dedicated which alleviates this such as navigation, the drop down notification bar and even power. After a while you’ll probably find yourself not using the touchscreen but our main issue is that not everyone will benefit from the accessory yet you have to pay for it.

Since there’s no physical connection to the tablet, there’s no hard drive, extra battery or ports such as USB in the way of features. It simply connects over Bluetooth and charges via micro USB.

The screen size remains at 10.1 in but Sony has improved the resolution to 2560 x 1600 and boosted the brightness to 500cd/m2. That’s plenty of brightness on offer and the pixel density of 299 ppi is impressive outpacing the iPad Air 2 which is 264 ppi. The ‘Triluminos’ screen looks great and the IPS panel means great viewing angles. We really can’t fault it and it’s up there with the Galaxy Tab S 10.5.

Other hardware upgrades include a Qualcomm Snapdragon 810 processor which is both octa-core and 64-bit. There’s 3 GB of RAM to accompany it, 32 GB of internal storage and a microSD card slot for adding up to 128 GB more. Performance is also extremely impressive and the Xperia Z4 Tablet breezed through our benchmarks (see below) and feels super slick in operation.

Additional hardware consists of 11ac Wi-Fi, NFC, Bluetooth 4.1 and MHL 3.0 but Sony has dropped the IR blaster which is a shame. There’s a Wi-Fi only model but you can also opt for 3G/4G LTE connectivity if you want data on the go and this model can also make phone calls – though you’ll want to do it hands-free or with a headset.

For photo and video there are reasonable 8.1- and 5.1 Mp cameras back and front. The main camera uses Sony’s Exmor RS sensor and the front has a wide angle lens to get more people in the frame. We don’t really advocate tablet photography but if you’re stuck for a camera the Xperia Z4 Tablet will take decent photos. Arguably more useful, especially with keyboard dock, is the front camera which is high quality which makes a difference for video calling.

An impressive claim and is that the Xperia Z4 Tablet can last a whopping 17 hours of video playback from the 6000 mAh battery – for comparison Apple only touts 10 hours from the iPad Air 2. In our battery test in Geekbench 3, the tablet lasted an impressive nine hours and 53 minutes with a score of 5933.

For software, the Xperia Z4 Tablet runs  Android 5.0 Lollipop and Sony adds its own user interface which doesn’t really have a name.

Sony has kept things quite vanilla meaning the experience is close to that of a Nexus device running stock Android. There’s the Lollipop two-stage notification bar and card-style recent apps menu. The software was slick and responsive during our time with the tablet.

We particularly like the addition of app icons on the nav bar at the bottom so you can launch apps without returning to the homescreen and a sort of start menu – when the Bluetooth keyboard is in use.

As usual, the firm pre-loads its own apps including Walkman, Album, PlayStation and Lifelog. It also comes with Microsoft Word, Excel and PowerPoint in pride of place on the main homescreen. Ther are also a few others such as AVG Protection, Garmin Navigation, Vine, Kobo Books. Luckily you can uninstall them all if you don’t want them.

Xperia Lounge which has been around for a while now offers silver and gold tiers with the top level reserved for Z devices. Sony promises content including music, video, cloud storage, stickers, themes and software upgrades for the life of the tablet.

As well as the High-Res audio support mentioned earlier, the Xperia Z4 Tablet includes PS4 Remote Play enabling you to play PlayStation 4 games on the device from the console over the same Wi-Fi network.