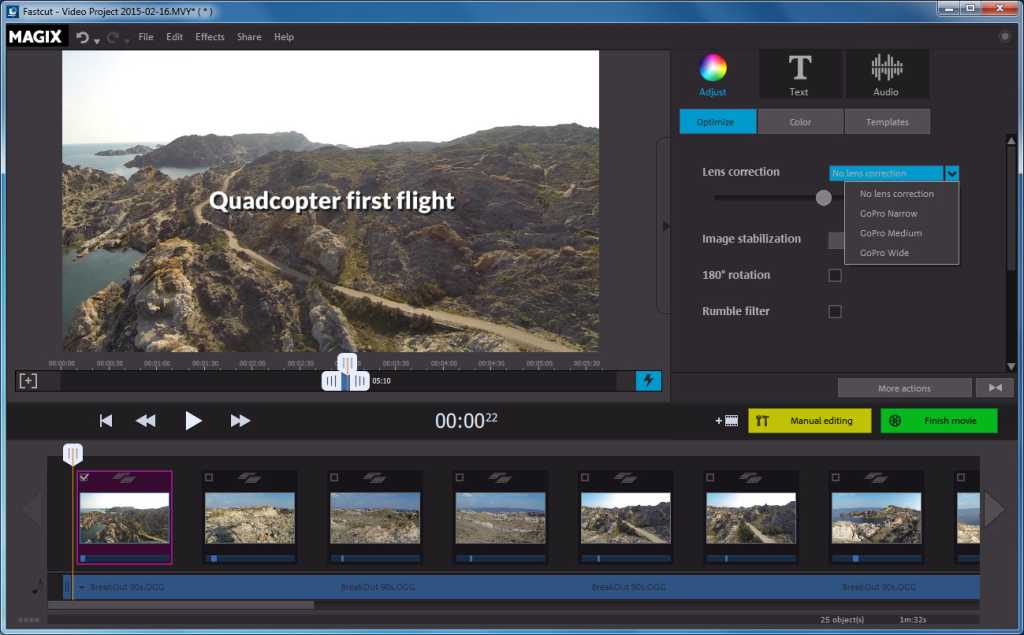 MAGIX FastCut is a very easy way to shape your action or sports video footage into professional-looking videos and export them to internet sites or onto your own mobile device. The level of automation, tied in with a good choice of templates for GoPro cameras and others, speed video making and the manual options provide extra control when you need it.

MAGIX, the prolific German software maker, has long produced well-received video editing packages, like Movie Edit Pro, but if you want to put together a holiday or activity video without spending a long time editing, you need something simpler and more automated.

MAGIX FastCut is designed to provide just that and is particularly geared to people with GoPro sports and activity vidcams. These cameras can capture video at up to 4K resolution and are designed to be body or stick-mounted to record activities such as biking, snowboarding or climbing.

The software caters for the GoPro cameras with a number of customised templates, but this doesn’t prevent it being used with other video sources. FastCut works with a similar paradigm to other editing software, where you load the video footage, edit it into shape, add a music soundtrack if required and save or upload the finished video. See also: Best free video editing software 2015 UK.

The main editing screen is laid out very conventionally, with a large video preview pane top left, a scene arranger with video and audio channels along the bottom and a tool ‘pool’ at top right.

FastCut does a lot of stuff for you automatically. When you import a video file and pick from one of the 15 pre-defined templates, the program supplies a music track and makes cuts between scenes. Music can be from smooth and subtle, to rock, to electronica and the cuts can be hard or soft, all put in place by the software.

If parts of your video are shaky or unstable, the program stabilizes them, within limits – there’s certainly an improvement – and fisheye distortion as in the wide-angle setting of GoPro cameras, can also be removed, flattening out the picture.

The program can handle videos up to HD and 4K resolution, but to help maintain playback speeds within the FastCut editor, the program creates a lower res proxy file which is what display, until you render the full video, once you’ve made your edits.

You can switch to a manual mode, which gives control over elements that are normally handled automatically within a template, but you can’t then reimpose the template, without starting again. There are a number of effects you can add on your own, from typical wipes to old movie, vignette and noise effects, to give the footage atmosphere. The soundtrack from the original video can be manually balanced with the music track, so neither drowns the other.

Once you’re satisfied with the video, you can export to various online sites or to supported mobile devices. The software supports YouTube, Facebook, Vimeo, showfy and MAGIX’s own online album directly, but you can also save in other formats for your own blog or website.

If you’d prefer to play it back on a tablet or phone, you can save in low, medium or high resolutions for Android, iOS or Windows platforms.

The system requirements specify a multi-core 64-bit processor running at at least 2GHz with 4GB of memory and Windows 7 or above. This rises to a quad-core with 8GB for editing 4K video. Much less than the minimum requirement and video playback starts to stutter, making it hard to work. (See also: Adobe Premiere Elements 13 vs Cyberlink PowerDirector 13 Ultra comparison review.)