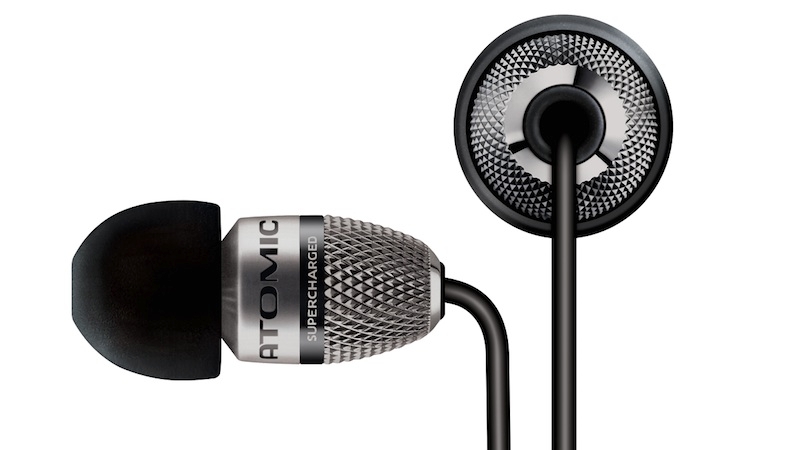 Atomic Floyd’s fixation with high-tech materials, showy precision engineering and gamer-style advertising copy is all evident in the SuperDarts Titanium earphones, with less expertise seemingly poured into the core acoustic principles. They sound energetic, sharp and bright to a fault, exaggerating more treble than sane ears need to make a musically engaging product. The industrial styling is a different subject and combined with the pseudo-tech marketing is on track to win over a heedless audience.

Atomic Floyd is a relatively new company, founded 2009 in the UK by ex-Philips man James Strong. After our initial listening to a sample of the brand’s latest flagship earphones, the SuperDarts Titanium, we met with Strong to chat and find out more.

We were particularly intrigued how these earphones costing £249 were designed and tuned. After all, no-one pays this much money for earphones just for their looks and the brand perception. Do they?

And what great style they have. Designed by ex-Nike man Stefan Andrén from Swedish studio Krownlab, the SuperDarts Titanium follows the innovative industrial design of the preceding models. These include the PowerJax, HiDefDrum and MiniDarts earphones, all majoring on precision-milled metal construction.

Where other earphones in the series use ‘German-grade’ stainless steel, we were told, the SuperDarts Titanium actually are made out of titanium. It’s space-grade stuff as well – Grade 3 titanium which is expensive to procure and difficult to machine. The result is a small ear-bud earphone with diamond-pattern knurling, and in-line three-button remote control suitable for use with iPhone. 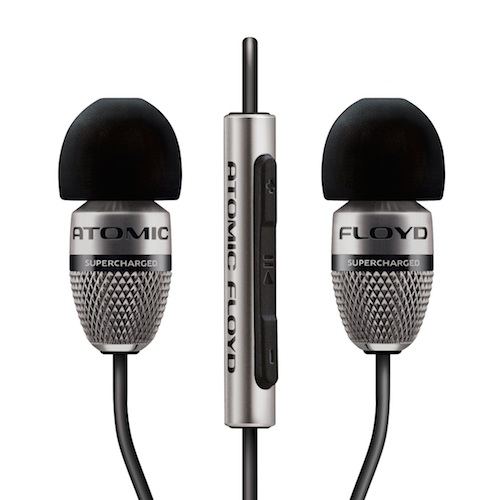 The main lead has a very fine braided Kevlar jacket, so fine you’d hardly notice it although it goes some way to reducing kinks and tangles in the cable. It’s also mercifully low in microphony, the carriage of brushing and rustling noises up the wire directly into your ears.

The wire inside is oxygen-free copper (OFC) with a silver plating, Strong confirmed. The remote assembly is also in a titanium finish and includes a microphone for use as a headset with a phone or laptop.

They’re very inefficient, so you’ll need to turn up the volume on your player to raise sufficient volume. A brief listen quickly told us the essential sound of the SuperDarts Titanium is somewhat lean in the bass and very bright in the treble. You could in fact sum up these earphones as the anti-Beats.

Beats headphones are far removed from high-fidelity reproduction but win popular favour by filtering off most of the poor-grade high frequencies of digital audio that can tire and annoy the listener. They simultaneously ramp up the bass level. The resulting retune goes some way to compensate for the thin and washed-out sound from lo-fi MP3 and AAC tracks that the majority of people load onto their smartphones.

These metal earphones may not weigh much more than some heavier examples in plastic, thanks to the use of lightweight titanium. Yet they still need a tight and secure earbud to keep them comfortable and keep them in place.

In our first trials with the SuperDarts Titanium we found them quite unlistenable, with their thin wiry screech and near total absence of audible lower frequencies. We persevered through all three of the included silicone earbuds – small, medium and large – and found none that could comfortably hold these buds properly in place nor to provide the all-important airtight seal to maintain low-end response.

We suspect part of the problem is the cable exiting through the very end of the metal sleeve, thereby allowing the weight of the cable to also pull the buds from your ear.

Some respite was found with the universal Tsc-500 foam buds in the box though, made by third-party specialist Comply. These need to be squeezed and rolled between your finger and thumb to squash them smaller, before inserting into your outer ear canal. They then expand back in size fractionally, creating something like a custom-moulded fit every time you use them.

It’s a chore to roll, insert, then hold them in place while they re-expand; but if your ears are anything like ours it may be the only way to approach these Atomic Floyd ’phones.

In a bid to tame the fierce treble we left them running-in at high volume for a week on looped play. Then satisfied they were as good as they were going to get, we set to listen again.

Now the worst excess of HF grit and glare were reduced somewhat, enough for more extended listening anyway. In conversation with James Strong we asked about these earphones’ measured frequency response, given the published graph plot which clearly shows a long trough through the midrange and severe peaks in the high treble region.

The graph is even annotated to show the frequencies of these resonances, the first around 8 kHz but the main troubling peak at 10 kHz, where the graph illustration is then cut short. What other problems may exist beyond 10 kHz is not shown.

The key point from the limited passband shown is a 10 dB chasm between the midrange and bass range, and something like 12 dB boost at 10 kHz, relative to a nominal 1 kHz midrange reference.

On the product’s webpage the graph annotations have been removed. The absence of meaningful numbers doesn’t trouble Strong. ‘All the other headphone brands bullshit with their graphs and specs,’ he volunteered, with Atomic Floyd instead preferring to sell its products to discerning tech lovers who like to own high-tech toys, like carbon-fibre tennis racquets and bicycles.

‘You want to feel good about the product, want it to last, something special,’ he added, ‘We use nothing off the shelf’.

CEO Strong is a businessman with background in industrial design, not so versed in the minutiae of audio technology, and could not usefully comment on his earphones’ acoustic design. His audio designer is based in Hong Kong and was going to expand but unfortunately Atomic Floyd later went dark on my questions about its sound technology.

Published technical details about the SuperDarts Titanium are scant, and there is even some confusion about their driver design – Strong told us that these and the stainless-steel SuperDarts use dual drivers in each earpiece, although the website specification suggests a single driver.

After our extended trials, the SuperDarts Titanium remained a bright, sharp-sounding earphone. There is bass to be found, reasonably firm and extended too and it certainly did not suffer the problem of urban-tuned headphones that swamp the sound in treacly bass. But it can be hard to follow any bass instruments when you’re ears are being misdirected with so much HF tinsel.

Instrumental separation was good, with soundstage mostly contained between the ears (rather than expanding beyond and around as some seem to do).

Buzzing across the sound of the SuperDarts Titanium is that metallic accent, over an overdamped tight bass and subdued midrange. If you enjoy the honeyed voice of your favourite singer, you may find them a little too sterile and recessive here. Beneath the treble glare, the midband and bass at least don’t suffer any obvious coloration.

Like turning up the contrast or brightness control on your television, you will become aware of all kinds of details in the programme you may not normally experience. And like any sharpness enhancement on the screen, you’ll hear the audio equivalent of fine lines and crowsfeet and spots on the skin of normally clean-faced TV presenters. That’s the sound of artificially exaggerated reality.

Some listeners seem to seek this super-detail, mistaking it for the musical insight and revelation available to products built for transparency to the source. But like malformed bass, explicitly forced treble is not native to the sound and can seriously muck with your enjoyment of music as it was meant to be heard.