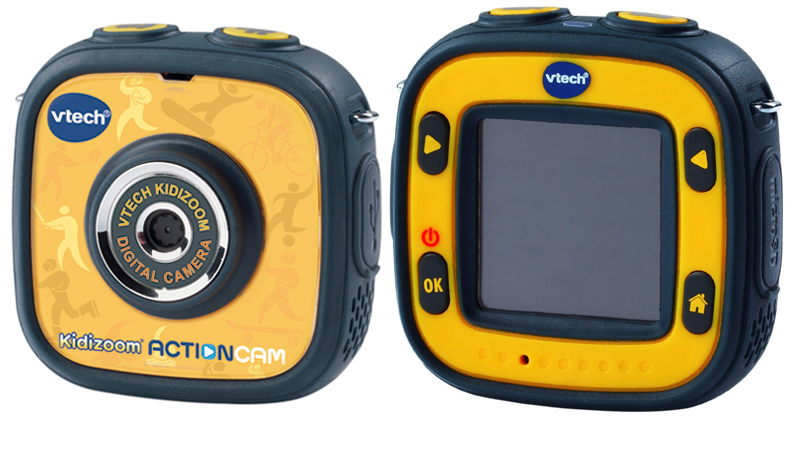 The VTech Kidizoom Action Cam is a great alternative to an expensive GoPro action-video camera (yes, even for adults who don’t mid the kiddie styling), and perfect for children as it is pretty robust, small and lightweight. It comes with mounts for bike and helmet, plus a waterproof case, so the £49 cost isn’t unreasonable as you shouldn’t need anything else except a bike and sense of adventure. Video quality is fine, although the standalone still photo resolution (0.3 megapixels) is basic to put it lightly. Strap it onto a bike, scooter, helmet or skateboard and relive the thrills and spills of your child as they hurtle headlong through hedges and into walls, crash to the ground, and sometimes get round the park without grazing a knee or bumping an elbow.

Who doesn’t enjoy those GoPro videos of crazy extreme sports action? Sadly we’re as unlikely to be jumping out of planes, biking along cliff ridges and paragliding off ski slopes as we are able to cough up the £200-£400 for the camera.

And if we can afford a GoPro I doubt we’d entrust it to a bunch of reckless or clumsy kids rushing off to the park, skateboard under arm.

But most parents would love to attach an action camera to their kids bike, scooter, skateboard or helmet and see what fun looks like from the perspective of their child.

The VTech Kidizoom Action Cam – sometimes referred to as the Fun Cam – retails for a more palatable £49.99, and comes with a waterproof case and mounts for bikes, skateboards, scooters and helmets. The more expensive GoPro doesn’t come with its £20 bike mount in the box, although there are plenty of cheaper accessories available online – many of which might even work with the VTech Action Cam.

And the GoPro doesn’t come with silly features to add (mostly a bit naff) photo effects and a few games, like the VTech Action Cam does.

It’s also not as robust as the Kidizoom Action Cam, which looks like it would take quite a bashing before breaking.

The VTech Action Cam is a much-cheaper but able action camcorder for the rest of us. Indeed, VTech should badge one without the Kidizoom name for adults, too.

(By the way, I think VTech is missing a trick with some of its other kids’ products, too. Its VTech Kiidizoom Smart Watch would appeal to trendy hipsters as much as children.)

The action camera’s screen is small (1.41 inches) but means children can playback their videos and photos straight away. (By the way, a GoPro requires a £60 extra for a playback screen.) Videos and photos can also be deleted straight from the camera.

We agree with VTech’s recommendation that the screen be set to auto off when the camera is mounted for sports, as you don’t want little Jonny or Jane watching the screen and not what they’re doing while flying downhill on a bike or skateboard.

The maximum video length is 30 minutes per file, which should be fine for most activities. The estimated maximum length of a higher-quality 640-x-480 video is around 15 minutes.

Apologies for the drab, wet February weather in this example of the Action Cam in, er, action. And thanks to Lexi Jary for braving the rain for the purposes of this review. We’ll go out again when it’s sunnier. We were drenched by this clip!

The lightweight Action Cam comes with 128MB internal memory, and this is expandable with a microSD card (not included in the box, but available online for about £12 for 32GB). We recommend buying one or two before you venture down the park or off on holiday as without one you’ll fit only about 2.5 minutes of 320-x-240-quality video. A 32GB MicroSD card could hold as much as a couple of hours of 640-x-480 video. Even a 4GB card could maybe handle han hour’s worth of the higher-quality footage.

Photos are saved as JPGs, and video as AVI.

With continuous video recording and playback the battery last about 2.5 hours before requiring recharging. You recharge the Action Cam using the supplied MicroUSB cable, which you also use to transfer photos and videos from the camera to your computer.

The camcorder comes with an adhesive mount for helmets, skateboards and whatever else you can stick it on.

As well as the mounts, case, cable and holder, the Action Cam comes with a handy wrist strap.