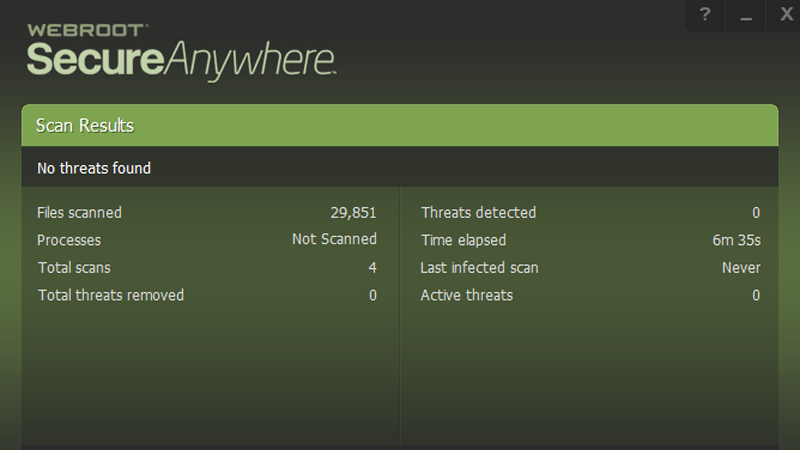 It’s not possible to compare Webroot’s offering with the others in terms of AV efficacy, as we have no test results, but the company’s claim to scan fast and leave a light impression looks fair.

Webroot, based in Colorado, US, offers cloud-based real-time threat detection, through what it claims is a core AV engine with a particularly light PC footprint. Internet Security Plus 2015, which sits under the general banner of SecureAnywhere, is a multi-platform offering and you can use it on any combination of PC, Mac, Android and iOS devices, up to the number of licences you buy.

The suite offers threat protection, anti-phishing, password protection, two-way firewall and identity protection. It misses out on a few extras, with no backup or online storage provision, though 25GB is available in the top-of-the-range Internet Security Complete product. There’s also no parental control nor PC tune-up, though the software does provide a sandbox for evaluating new software before setting it free on your system.

Webroot doesn’t provide samples to test sites such as AV-Test and AV Comparatives. Although these are the two main IS evaluation organisations, the company argues against them on two fronts.

Firstly, it claims the samples used have an inbuilt bias. Test sites draw their malware samples from the suppliers of the security software on which they’re tested. There is, therefore a potential for bias in the samples, but given the number of IS software providers – two dozen in the case of AV-Test – a single supplier would have to contribute a huge number of samples, unique to their own lab, for any effective bias to show. Anyway, don’t you want your IS software to handle threats from whatever source?

Webroot’s second argument is that the test sites concentrate on how well the software blocks malware and don’t give enough weight to mitigation of an attack, should the malware get through.

In other words, how does an IS suite handle damaging code if it does get onto your system? Does it prevent it getting at important subsystems, such as the registry and browser software? Does it stop it from reproducing? We see this as a more valid argument, though still feel most people will want the bulk of any security company’s R&D focused on detection and prevention of initial infection.

In our own tests, Webroot Internet Security Plus 2015 completed a scan of our 50GB file basket in just seven minutes, though it only looked at 28,851files. A repeat scan examined exactly the same number, but took 25s less. The scan rate is good at 71 files/s.

Scanning only puts a light load on a system, with a 28 percent increase in copy time when a scan was running in the background. It’s not possible to compare Webroot’s offering with the others in terms of AV efficacy, as we have no test results, but the company’s claim to scan fast and leave a light impression looks fair. (See also:  13 best backup software 2015 UK.)