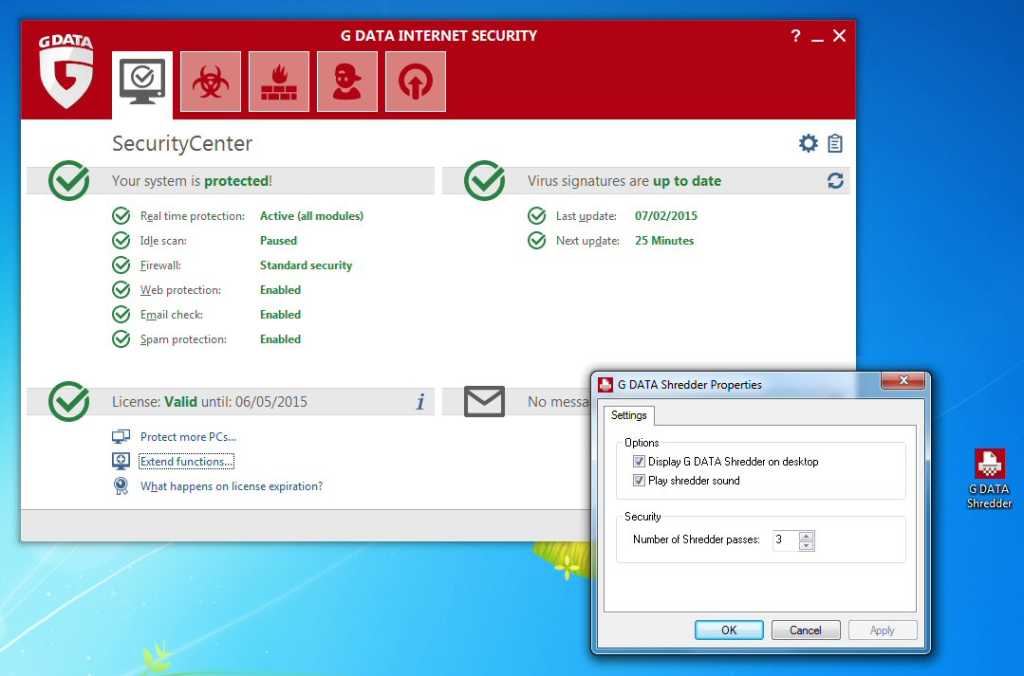 G-Data Internet Security 2015 is relatively inexpensive for a full-featured security suite. It’s not the most successful at beating out web threats, but it is sufficiently good to be worth installing. A decent purchase, if not the best.

The German supplier G-Data has been in the anti-virus software business for 30 years and its latest mid-range offering builds on previous development.  It’s current sales slogan is ‘Trust in German Sicherheit’, which assumes a lot for our knowledge of the language; is it a kind of sausage? (See also: Best antivirus software in the UK.)

There’s nothing in the way of PC tune-up, for cleaning out old code or unused registry entries, and no online storage or backup software. These facilities are often reserved for top-of-the-range products, though.

G-Data uses a technology it calls CloseGap, which extends the dual-engine approach the company uses. Running two AV engines in parallel is a good way to increase the protection offered by a package, but can result in extended scan times and slower performance. CloseGap is claimed to prevent this slowdown, while maintain the same level of security.

The interface is very straightforward and easy to use, with five large icons at the top of its control window, each of which leads to a pane with setting and status information. Much of the setup is automatic, though, and it can be installed as a load and forget application.

Despite CloseGap, the performance of the G Data scanner was quite poor on our tests. It took 50 minutes 23 seconds to scan our 50GB file basket, but only examined 8,753 files, giving a scan rate of just 2.90 files/s, one of the lowest we’ve measured. Repeating the test examined the same number of files, but this time in just 53s.

The load put on a typical system by scanning under G Data is light, with just a 20 per cent increase in the file copy time in our test. AV-Test scored the software at 4.5/6.0 in its Performance category, which looks at the influence of the software on performing regular tasks. It slowed the system down by 3s overall, which was a second less than the average for the test group. (See also:  2015’s best antivirus for PC and laptop UK.)

Under Protection, which tests its ability to detect widespread and zero-day malware, it scored 5.0/6.0. which breaks down into 100 percent protection against prevalent malware and 96 percent against zero-day attacks.

The Usability score, which measures false positives when installing and using legitimate software, gave a full 6.0/6.0 with no alerts or blocks seen throughout the period of the test. You’re very unlikely to have problems when running your normal applications or installing new ones.

The three different scores combine to give an overall result of 15.5/18.0. This is a another good score, though not in the forefront of IS suites, some of which manage a full 18.0/18.0.

G-Data Internet Security 2015 is five pounds cheaper for a three-PC licence than most of its competition and offers most of the same functionality. (See also: 13 best backup software 2015 UK.)