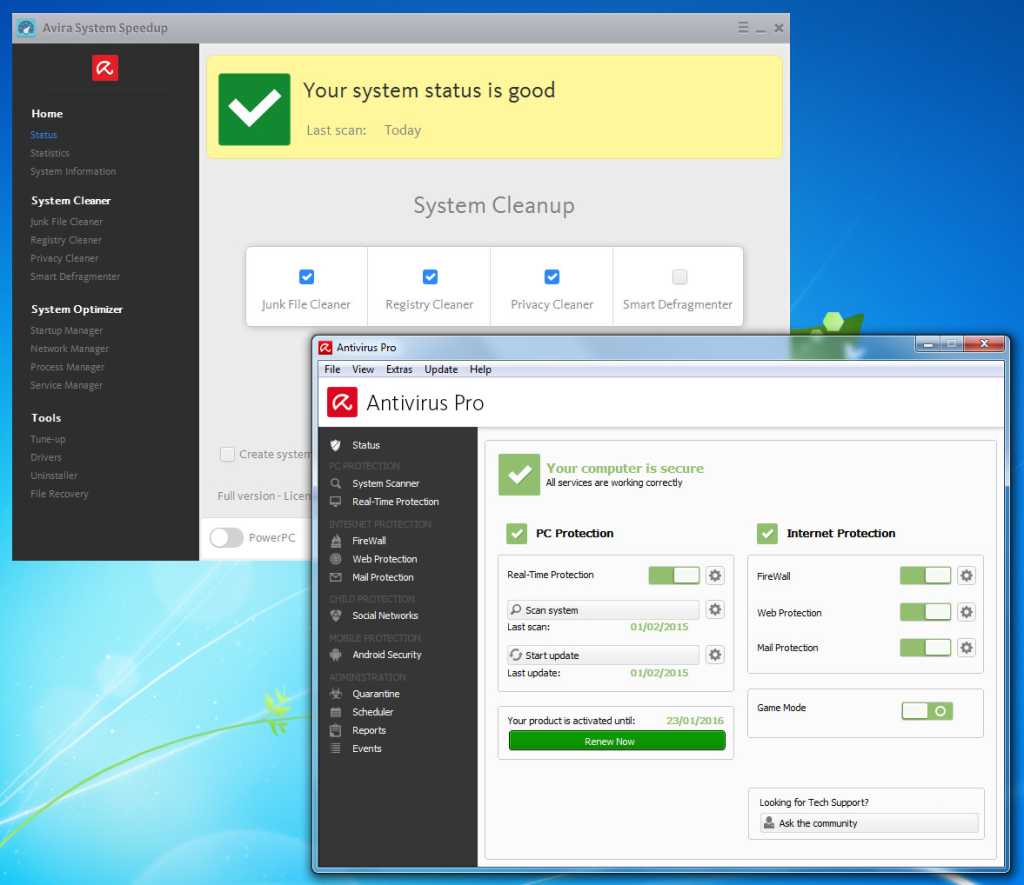 Avira Internet Security Suite 2015 is a good, solid IS suite with useful extras in the System Speedup app. Technically excellent, it loses a little for lack of any form of backup, but is still a good choice.

There are links to further free utilities, including a social network monitor for parental control and an Android app, which provides basic AV and anti-theft protection, including an alarm. What isn’t included is any form of backup or online storage, so you will have to add this separately, if you don’t have it from another source.

All the program’s features are controlled from an old-school control panel, without the sliding tiles or other cosmetics of some of its rivals. It’s very functional, though and easy to work your way around. It’s hasn’t suffered the dumbing down of some other interfaces.

The extra you get in the IS Suite, over Avira’s Antivirus product, is Avira System Speedup. This is a suite of utilities which cleans out unwanted files and stubs and provides managers for startup processes and auto-run programs, not normally available in Windows. These apps are not all duplicates of Windows’ own offerings and do offer extra functionality.

The defragmenter, for example, goes through selected drives and indicates the number of fragmented files, before defragmenting. (See also: Best antivirus for PC and laptop UK.)

AV-Test (www.av-test.org) scores the Avira engine at 17.0/18.0, a very good score. It breaks down as 6.0/6.0 for protection, 6.0/6.0 for Usability and 5.0/6.0 for Performance. When you look at the figures more closely, the Protection tests showed a 100 percent detection of widespread malware and 99.5 percent  accuracy in detecting zero-day attacks.

The latter score is particularly good, as it relies on detecting suspicious activity, rather than comparison with pre-defined malware signatures, and is much harder to do. (See also: Best backup software.)

Usability tests involve checks for false detection of legitimate software and warnings or blocks on visiting legitimate websites. The software had a completely clean bill of health on this, with no false indications in any of the subcategories. Particularly impressive was the complete lack of false positives on the 425,612 samples tried, when the average for the test group was nine.

The system performance hit was just 2 seconds over the five different scenarios used, where the group average was double that, at 4s. This reflects our own results, where copying a 1GB file took 27 percent longer when the Avira software was running a scan, than when not.

It took 46 minutes to scan our 50GB test basket, examining 358,714 files to give a scan rate of 130 files per second. Repeating the scan showed virtually no fingerprinting and took within a couple of minutes of the first, so perhaps it’s as well the system load of the software is relatively light.