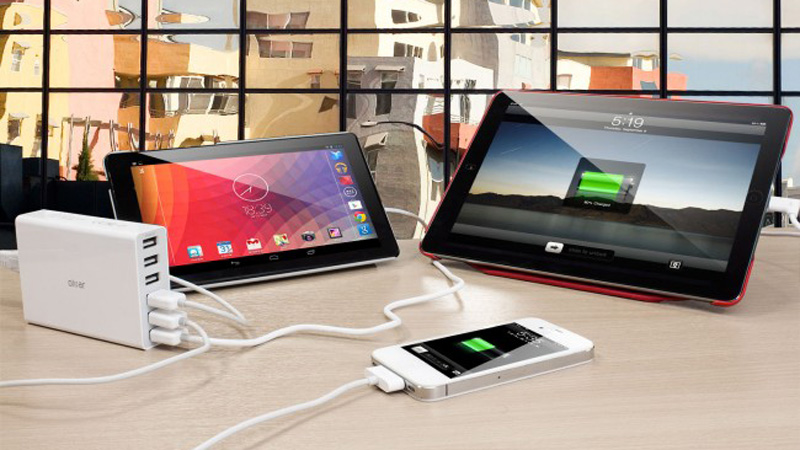 A tad more expensive than some of its rivals, Olixar’s desktop charger adds value with a lengthy warranty and six faster-charging USB ports. It’s not flawless, but for £35 this desktop charger is a very useful device that could help you free up some power sockets in your home or some room in your suitcase.

Olixar’s six-port desktop charger is very much like the Zendure and iClever desktop chargers we’ve recently reviewed. It’s a little more expensive, but in return you get faster-charging and a reassuring two-year warranty. It’s also got an extra output when compared to the Zendure. Also see:  Best power banks.

When choosing a desktop charger a key consideration is how much power it can deliver. It could have 10 USB ports, but if it weren’t able to support all at once it would be no better than those devices that have just three or four.

In common with the iClever, this Olixar is a six-port desktop charger with a 50W total output. That’s an improvement over the five-port, 40W Zendure, but with all ports in use the difference between how much power is delivered is minimal.

Assuming all devices plugged into the Olixar are drawing maximum power, this desktop charger can deliver 8.3W to each. However, like the Zendure and iClever, intelligent technology (here known as Smart IC) built into the device recognises the attached gadget and automatically delivers the correct amount of power. The maximum a single port can deliver is 12.5W, which is slightly up on the 12W offered by the competition, resulting in faster charging for your connected devices. Also see  how you could be charging your smartphone or tablet faster today.

The Olixar is a sleek white plastic device, but its design is marred somewhat with the specs plastered on one edge. The edges are rounded, yet not entirely smooth, and we found this white device could pick up dust from the desk.

The Olixar is a little larger and heavier than the Zendure and iClever, although you’d notice the difference only if you were to place all three side by side. All three feature an 100-240V AC input at one end, and six (five for the Zendure) USB ports at the other.

As well as supplying a generous two-year warranty for peace of mind, the Olixar builds in an automatic safety cut-off should it be required.