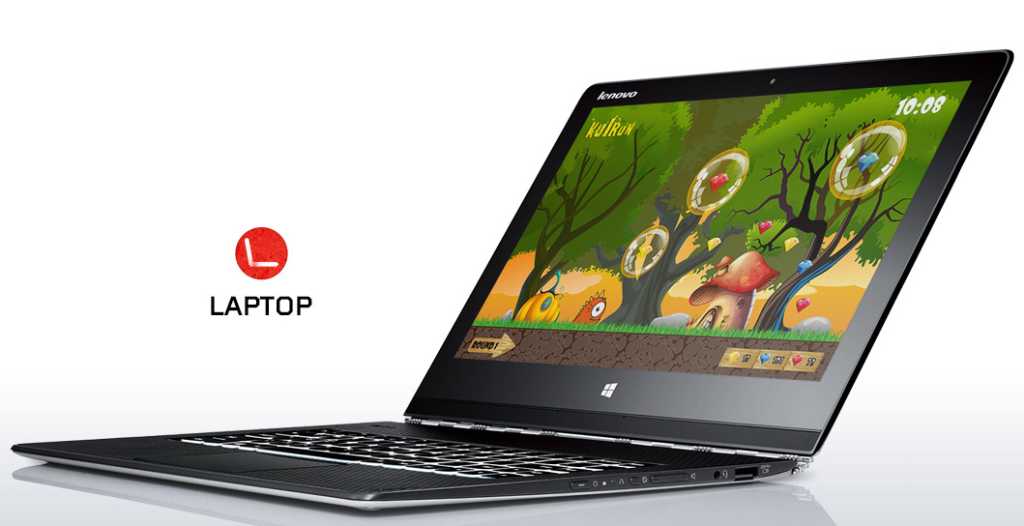 The Lenovo Yoga 3 Pro is a lightweight ultraportable that can convert into a Windows 8 tablet. Don’t be misled by the name – the Yoga 3 Pro is far from a professional notebook, foretold by Lenovo’s choice of Windows consumer operating system. Overall battery life is better than budget laptops although we had hoped for more like 10 hours with the novel low-power processor. Overall system performance was impressive given the low clock frequency, with graphics potentially sufficient to run some Windows games at lowest settings.

If you can’t make your mind up between an overweight tablet or an underpowered laptop, look no further than the Lenovo Yoga 3 Pro-1370. Also see: Best new tablets coming in 2016.

As the name betrays, this is the third attempt from the Beijing computer company to make a mobile device that does double duties, a hybrid convertible slate with keyboard. It folds closed like a regular clamshell notebook, and can be opened up for use as a Windows 8 touchscreen laptop – or, you can keep pushing the screen back until it’s revolved 360 degrees, like bending a book right around until its spine cracks. When it’s revolved all all the way around, hidden magnets help to keep the back of the screen adhere to the back of the keyboard.

Thankfully this hinge didn’t crack in our tests. It’s a fancy piece of engineering design, quite literally, based on what looks like an articulated metal watch strap. And at intervals along the hinge are extra bendable links that resemble woven metal cloth.

With the Yoga contorted into Windows 8 tablet mode, you have a 1.2 kg Windows 8 tablet and when held as such the exposed keyboard underneath provides an unsettling surface for your fingers with which to support the tablet. The keyboard is of course deactivated part way on the lid’s revolving journey. After satisfying ourselves that this function worked, and given Windows OS poor suitability as a tablet operating system, we continued testing the Yoga 3 Pro as a regular laptop.

Looked upon as a Windows lightweight notebook it makes a lot more sense, and now the 1.2 kg weight means it truly is one of the lightest of the breed. Its 13.5 mm thickness is no longer that of a bloated tablet PC but a relatively sylph-like notebook. See also: best tablets of 2015 UK.

Before you can start using the Lenovo Yoga 3 Pro, there is the usual Microsoft end-user licence agreement to click through on the first setup screen. Running alongside this long treatise Lenovo has added its own terms and conditions to which you are must consent or else not continue to use the laptop any further.

Lenovo also employs the services of third-party ClientConnect Ltd that supplies Trovi software, rebadged here as Lenovo Browser Guard. Trovi changes your default search engine and home page, and will try to discover your location. The terms suggest it can also provide an ‘alternative error page’ which suggests consent to DNS hijacking on NXDOMAIN results after careless address typing.

The terms continue by explaining that Browser Guard/Trovi software will harvest technical data about your PC and your personal preferences on it. ClientConnect will collect your web browsing history, search queries and sell them to third parties, as well as provide you with advertisements. The licence also explain how Browser Guard’s harvested data will be shared with law enforcement, will be stored in different locations around the world; and when Trovi is bought by another company, all your collected personal data will be sold on to that company. The terms of use state that in order to use the Yoga Pro 13 you must be 13 years or older.

McAfee Central virus software is also pre-installed and you must agree at this screen to terms that state that McAfee will collect personally identifiable data about you, your PC and your network. See also: Best laptops of 2015: The 29 best laptops you can buy in the UK.

There are two unusual areas of interest that promote this Lenovo over what may have gone before: its very high resolution IPS display, and the first outing for a new processor type from Intel, from 2014’s new Core M series for mobile devices. The low power of the chip is designed for use in tablets without a need for a cooling fan, although Lenovo has fitted a fan to this device which can just be heard spinning.

At 3200 x 1800, this panel exceeds the pixel count found in the laptops that started the current high-resolution trend, namely the MacBook Pro with Retina display. The 13.3-inch screen from Apple comprises 2560 x 1600 pixels, for instance, which results in a density of 220 ppi. Here Lenovo is using a Samsung PLS touchscreen with 276 ppi; and has set the Windows interface to 250 percent scaling to make the interface actually usable.

We also tried reducing this scaling to 200 percent, which gives a virtual resolution of 1600 x 900, and a similar effect to Apple’s HiDPI mode used on its Retina-displayed Macs. It’s a matter of personal taste but we found this gave a better balance between screen space and a comfortable interface.

PLS (plane to line switching) is Samsung’s name for its version of IPS (in-plane switching), and here has the usual virtue of wide viewing angles – essential for a tablet device and still very welcome when used as a laptop. Overall performance fell a little short of the standards originally set by IPS technology though. In our tests it could only provide a maximum contrast ratio of 320:1, somewhat reduced from the 800:1 or so we find on high-grade IPS laptop screens. Colour gamut was better than budget laptop screens at 93 percent sRGB, and 68 percent Adobe RGB. And overall colour accuracy was also good for the category at 1.63 Delta E, using the Datacolor 48-tone test.

Used as a laptop touchscreen it suffered the usual problem of wobbliness when prodded, while the mirror-like finish was mitigated slightly by some minimal reflection-reducing coating. We still found its shine made it difficult to read the screen under office overhead lighting. See also: Best budget laptops of 2015 UK: Best cheap laptops.

Intel’s new Core M processor was designed to power low-power laptops and similar mobile devices. The Core M-5Y70 is based on the current state-of-the-art 14 nm lithography and has a specified total design power (TDP) of just 4.5 W. Its clock speed looks underwhelming at just 1.1 GHz, although recent advances in Intel’s x86 designs have shown how matching or better performance from new-generation processors can be found while still lowering the headline chip speed before. And bear in mind there’s an unusual short-term overclock facility available from Turbo Boost, with a maximum frequency of 2.6 GHz listed.

This Core M chip certainly looks to be trimmed for low power consumption rather than performance though, our benchmark tests showed.

In Geekbench 3 it averaged 2584 points with a single processor core at work. That effectively places it alongside the reference PC for this particular benchmark test, a 2010 Mac mini with 2.5 GHz Intel Core i5-2520M, which was normalised to score 2500 points.

In multi-core mode, the Lenovo was less impressive, averaging 4654 points. That’s less than twice the single-core speed, and an unusual result; especially for a dual-core processor with Hyper Threading Technology that typically indicates a greater-than two-times multi-core result.

Cinebench 11.5 followed a similar outcome, with single- and multi-core results of 1.05 and 1.60 points respectively. That gives a 1.52x differential; again below the usual 2+ multiplier.

Cinebench 15’s results were more consistent with Intel’s previous processors, reporting 60 and 172 points for a multiplier of 2.88x.

Turning to overall system benchmarks rather than those that focus only on the CPU and memory, PCMark 7 reported a surprisingly good result of 4758 points. That’s close to the 4783-point result of a fast ultraportable like the HP EliteBook Folio 1040 G1 with its 2.1 GHz Intel Core i5-4600U and SanDisk X100 SSD.

PCMark 8 is the more up-to-date system benchmark test, and here the results were much lower. In the Home (accelerated) test it scored 1861 points, and 1712 in the Work (accelerated) run. (See also: Best ultraportable laptops of 2015 UK: Best Ultrabooks you can buy.)

The main CPU clock frequency may be low and its performance somewhat variable, but Intel hasn’t scrimped much on the GPU component of this Core M chip. The Intel HD Graphics 5300 graphics engine has 24 ‘execution units’ (EU) which are broadly comparable to stream processors, and a maximum frequency of 850 MHz.

In our tests it showed heavy-handed throttling effects, which we would attribute to either intelligent thermal management or memory leak issues.

On the second run of the same test, it played at 25 fps. Third and subsequent runs saw the framerate drop steadily to 24, 23, 22 then 21, and down to 20. Repeated playthroughs then seemed to stabilise at around 21 frames per second. On exiting the game we noted a Windows low-memory warning.

Flash storage of the Yoga 3 Pro is courtesy of an M.2 SATA solid-state drive, a LiteOn L9G Series component with 256 GB capacity. In our tests this could sustain 434 MB/s sequential reads and 375 MB/s sequential writes, and good 4 kB performance of 19.5 and 38.5 MB/s random reads and writes. At queue depth 32, this enabled near parity of read/write performance, at 64,000 IOPS.

Long battery runtime is the raison d’etre of the new Core M Series processor, and here we found a reasonably good final result available from the non-removable 44 Wh lithium-polymer battery. In our standard looped-video rundown test over Wi-Fi, the Yoga 3 Pro lasted a shade under six hours (5 hr 56 min). That’s better than many laptops, if less than half the 12-plus hours you can expect from the 13.3-inch MacBook Air with its Intel Core i5 processor.

Standby time was decidedly poor. Over the space of one weekend, the Yoga 3 Pro had drained its battery from full to empty while simply left in standby. (See also: 11 best Chromebooks 2015 UK – best Chromebook reviews.)