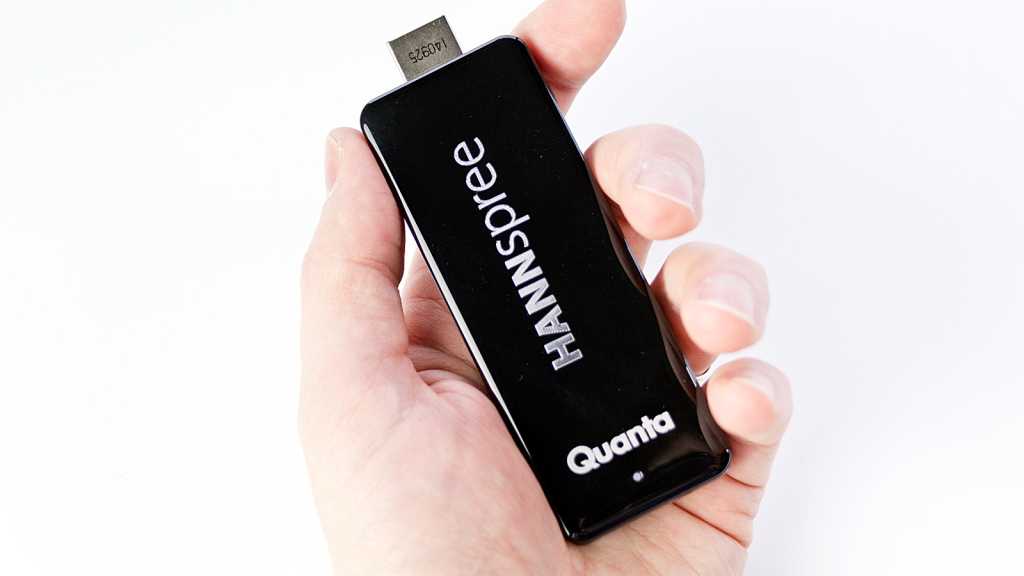 The Hannspree PC on a Stick isn’t for everyone. If you want to convert a TV or spare monitor into a Windows PC for watching web videos, emailing, web browsing and other undemanding tasks it will do the job, but the more technically minded might prefer to save money and buy a Raspberry Pi 2 and install Rasbpian Linux.

PCs are cheap as chips these days. As long as you don’t need much power, you can buy a tower system (without a monitor) for less than £150. For those who want something considerably smaller, Hannspree has produced what is currently the world’s smallest PC, and it isn’t much larger than a Google Chromecast. Here’s our Hannspree PC on a Stick review

The stick PC can almost be described as an HDMI dongle, since it can plug directly into a TV or computer monitor with an HDMI port. It can even take power from a TV’s USB port (so long as it can provide 2A, which most can’t) but a mains adaptor is included in the box. You also get a short HDMI extension cable in case the display’s HDMI port is in an awkward position.

This lets you turn any monitor or TV into an all-in-one PC, with full-blown Windows and the ability to install your favourite applications. You might want to use it to make your TV ‘smart’ since you’ll be able to use a web browser and watch video from YouTube, Vimeo, iPlayer and all other catch-up services.

Around the sides of the glossy black casing you’ll find a microUSB port for power, a full-size USB port for peripherals, a power button, some vents and a microSD slot. There’s no Ethernet port, so you’ll have to rely on the built-in Wi-Fi for an internet or LAN connection.

Unsurprisingly, there’s no Core i5 lurking inside. Instead, the PC on a Stick has an Intel Atom Z3735F running at up to 1.83GHz, which is pretty respectable given the slim dimensions. It’s a 64-bit quad-core chip which has a base frequency of 1.33GHz.

There’s 2GB of RAM and 32GB of flash-based storage. Should you need it, there’s also Bluetooth.

Pre-installed is Windows 8.1 with Bing (the free, lightweight version of Windows which occupies less than 4GB of storage). You can’t really use the PC on a Stick out of the box, though. With only one USB port, you will need to provide your own USB hub in order to attach a keyboard and a mouse simultaneously. Unless, that is, you happen to have a wireless keyboard and mouse set that requires only one USB port or can connect directly via Bluetooth.

Performance is naturally something of a compromise over a standard PC. In fact, it’s best described as smartphone-like. We ran Geekbench 3 and saw results of 767 points in the single-core test and 2107 points for multi-core.

Given that even the iPhone 5S managed 1409 and 2556 respectively, they’re not great results. In SunSpider the Hannspreee completed the web test in 550.3ms. (See also: What’s the fastest smartphone  to find out which other phones are quicker than the Hannspreee)

If the PC on a Stick is appealing because of your all-in-one PC aspirations, just bear in mind that you won’t want to run any apps which are too demanding. There’s enough grunt for web browsing, emailing, basic photo editing and other similar tasks. What you’re not going to be able do is edit video, play 3D games or run any other intensive programs.

A cheaper alternative could be the new Raspberry Pi 2. It’s £30 and has an ARM processor, so while it won’t run Windows 7 or 8, it can run Raspbian Linux. And it has four USB ports.

Hannspree PC on a Stick: Specs