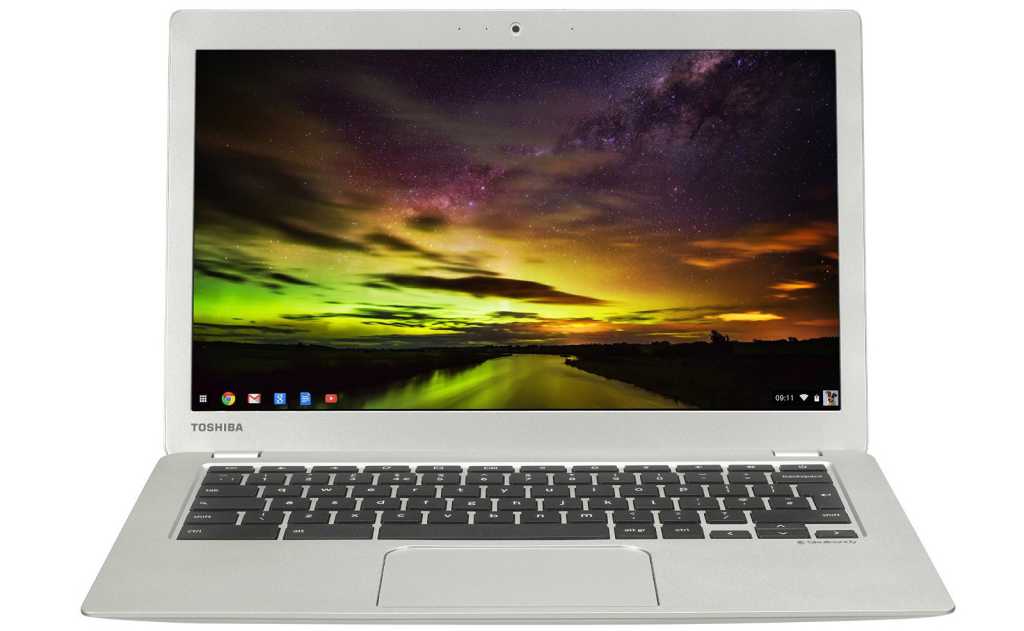 If you’re happy to live in the cloud for the majority of your tasks, then Toshiba’s Chromebook 2 is currently the best way to do it. The device is light, fast, and that screen is worth the money alone. Chromebooks are quickly coming of age, and this Toshiba model is something that could easily convert a legion of fans to the ever improving ChromeOS universe.

Chromebooks are incredibly useful, simple laptops that offer excellent value for money, and a surprising amount of productivity, if you’re willing to fully embrace the cloud. Up until now the vast majority of models available have favoured the smaller 11.6-inch screen size, which is perfect for portability but can be a little cramped if you’re working with lots of text or watching videos. Toshiba addressed this gap in the market last year with its 13-inch Chromebook, which was a solid offering a little let down by its average display.

To be fair, most Chromebooks feature underwhelming screens, often plumping for 1366×768 resolutions on cheaper TN panels that do the job but can be somewhat frosty and muted. Only the HP 11 and Google’s gorgeous but hugely expensive Pixel have broken the pattern with luscious IPS displays. Now Toshiba joins that elite band with the rather impressive Chromebook 2. Also see:  Best Chromebooks 2015.

Design-wise this model bears more than a passing resemblance to its previous iteration. The chassis is made from silvery-grey plastic with a dimpled pattern on the outer surfaces, and smooth metallic-style finishes inside. It’s not really going to win any awards for services to  aesthetic advancement, but the device is sturdy, neat, and light at 1.35kg (just a shade under 3lbs). Various ports adorn the casing including ones for HDMI output, USB 2.0, USB 3.0, and an SD/SDHC card reader.

It’s a little curious that the previous model came with two USB 3.0 ports, whereas this version has only one, but its hardly a deal-breaker. One useful thing to know is that the solitary USB 3.0 port supports sleep-and-charge, so you can plug in your Android phone (we had no luck with our test iPhone) and it will charge while the Chromebook is asleep. Useful if you’re caught out and need a quick top up.

Chromebooks keyboards have largely settled on a standard design which is simple and usually spacious. One glaring omission is a caps-lock key, instead replaced with a search key – Chrome is a Google operating system after all. But fear not, if you still wish to shout at people on the internet then pressing Alt+Search toggles caps-lock mode on and off. The Chromebook 2’s keyboard is very nice, with hardly any noticeable flexing, and the shallow travel of the keys taking about two minutes to get used to.

Complementing this is a generously proportioned touchpad, which is responsive, accurate, and executes the wide range of useful ChromeOS multi-finger gesture controls with no problems at all. It really is a lovely device to work on. (See also: best laptops of 2015.)

Of course all of this is elevated to another level, in Chromebook terms, by the inclusion of a full HD, IPS display. Yes the HP 11 did feature a lovely panel, but it needed something pretty to look at, as the performance on that model was painfully slow when you had a few tabs open. The Chromebook 2 suffers no such lag, thanks to the Baytrail inspired Intel Celeron CPU, 4GB of RAM, and the resident 16GB SSD storage. Moving between webpages is smart and snappy, plus when you get there everything looks detailed and colourful.

It’s enough to bring small tears of joy to the eyes of us who regularly use Chromebooks. The 1920×1080 resolution does make text smaller, but thanks to the simple zoom feature on ChromeOS all the content in the main panel can be set to resize while retaining clarity. We ran mostly on 150% and everything still looked very sharp.

Toshiba does offer a lower resolution model (1366×768) for £50 less, and while this does offer a couple of hours extra battery life, it only comes with 2GB of RAM which would make it more akin to the rest of the pack. To be honest the full HD model is already such an excellent bargain that we can’t see any reason to skimp on the cost, as you most certainly get tremendous value for money. Our review model also survived for over seven hours of movie playback, so there’s still, easily, a day’s work in this device.

One other new feature in the Chromebook 2 is a set of stereo speakers that have been tuned by headphone manufacturer Skullcandy. Searching the casing will reveal no clues to their position though, as Toshiba has actually placed them under the keyboard. On full blast they expel a boisterous volume which can easily fill a small room. Definition is good, and you can clearly hear the placement of instruments in the mix, but the sound is still devoid of any real bass response due to, well, physics. This is after all a lightweight, thin device. Saying that, the sound is perfectly reasonable for watching videos and streaming music in the background. Also see:  Best Chromebooks 2015.

Google’s Chrome Operating System powers all Chromebooks, and keeps on adding refinements that make these devices more and more useable for everyday life. True, you still need access to the internet for a wide variety of tasks, but many apps now work offline, including Google Docs, Gmail, Evernote, Pocket, plus a number of other productivity and entertainment programs. In fact the Chrome store continues to surprise us with its breadth of interesting apps that show how the eco-system is maturing nicely. Things are at their best though when Chromebooks are online, and then you have access to an even more extensive library, plus any web-based services.

A few notable exceptions to the rule still apply. iTunes is pretty much never going to run on ChromeOS, so if you want to sync your iPhone 6 or iPad Air 2 to a Chromebook well, you’re out of luck. Skype is also absent for the most part, it can be used after a bit of hacking  but the process isn’t for everyone. Thankfully Google’s own Hangouts is a decent alternative.

If you want to use Microsoft Office then it can be done through the free online versions, which are a little feature-bare but sync up through a OneDrive account so you can edit them in full desktop versions of the suite when you’re at work or on a Windows/Mac computer. Google’s own office suite is very good too, and as each Chromebook comes with 100GB of storage on Google Drive you won’t run out of space anytime soon. Read next:  Should I buy a Windows laptop or a Chromebook?