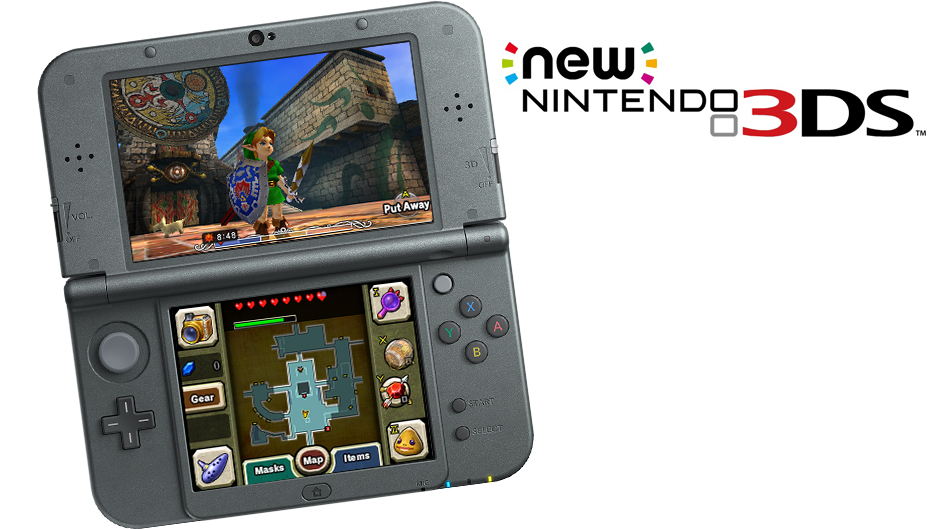 But if you consider the New 3DS’s price from a broader perspective, taking into consideration the price of other games consoles, it does seem a bit pricey. You can buy the Sony PS Vita (2014 edition) for around £150, and even the Nintendo Wii U for £160. For most gamers, though, its value lies in the games available, so for Monster Hunter fans, Pokemon fans or fans of Nintendo’s many classics, paying the £150 or £180 for the New 3DS is a no-brainer.

The New 3DS might not look much different from its predecessor at first glance, but it’s a combination of several small hardware changes that makes this hand-held gaming console everything the original 3DS should have been. We explain in our New 3DS review.

If you’re tempted by the New 3DS, but not sure which model to opt for, take a look at our 3DS buying guide to help you decide.

I’ve been using the 3DS for more than a year now, and I love it, but there have always been several annoying quirks about it that I wished Nintendo would address. Enter the New 3DS, which eradicates pretty much every one of those issues thanks to some much-needed tweaks and improvements.

The first thing that annoys me about my 3DS is the actual 3D element. I often find myself switching it off completely and playing in 2D because it’s so difficult to keep the 3DS in just the right place for the 3D to look good whilst you’re playing a game, and that surely defeats the point of owning a 3DS in the first place.

When I picked up the New 3DS, which Nintendo says has 3D face tracking to help improve the 3D experience, I was dubious, but within seconds I was cranking the 3D slider up to maximum. It’s fantastic.

For the first time, I was able to play Monster Hunter 4 Ultimate with the 3D turned on and become fully immersed in the game rather than constantly getting frustrated about the viewing angles, which meant those nasty monsters were getting slayed in no time.

The 3D improvements have been made possible thanks to the introduction of a tiny camera next to the 3DS’s main front-facing camera, which tracks where your face is and adjusts the image accordingly.

The second of the main changes that comes with the New Nintendo 3DS is the introduction of the C Stick and two new buttons: ZL and ZR.

Many gamers have been crying out for a second joystick on the 3DS, particularly for games that require you to rotate the screen in addition to moving your character – it can get tiresome having to reposition your hand to use the touchscreen for screen rotation, that’s for sure.

Nintendo offered a solution for original 3DS and 3DS XL owners in the form of the Circle Pad Pro, an attachment that added a second joystick and two additional buttons but also added bulk and weight to the otherwise super-portable device, so it’s less than ideal.

The New 3DS, however, has a tiny C Stick built-in, something we really wish Nintendo had thought of four years ago when the 3DS came out (it really has been that long).

I’m so used to playing without the C Stick now that I found myself completely forgetting about it when I was playing Monster Hunter, one of the games that the C Stick should be particularly beneficial for (which is probably part of the reason the release of the new Monster Hunter game coincides with the New 3DS).

It’s brilliant that the C Stick has finally been built-in to the 3DS, but for me it’s already too late. If you don’t own a 3DS yet then you’ll probably find that you’ll use the C Stick from the get-go, and if you’ve been using the 3DS with a Circle Pad Pro attached then this is a much better solution, but for me it’s not a big reason to upgrade to the New 3DS because it’s likely the C Stick will just get neglected.

The ZL and ZR buttons, which you’ll find fall beneath your index fingers beside the already present L and R buttons, are another extra that isn’t particularly useful right now, but we imagine that when developers begin integrating the buttons into their games they could be a real boon and offer further control and gameplay features.

Here’s another change that you won’t notice at first glance, but begin using the New 3DS and you’ll find that it’s much faster than its predecessor. Opening and closing apps is now super-speedy.

That’s thanks to improved CPU performance, which means loading times have been reduced too. What’s more, Nintendo says that “several upcoming games” will be built from scratch specifically for the New 3DS to take advantage of the power boost it’s been given.

Nintendo has updated the 3DS’s web browser to allow for a better browsing experience when using the internet (something I admittedly don’t find myself using my 3DS for but I’m sure some people do).

You’ll be able to use the ZL/ZR buttons to switch tabs, and use the C Stick to zoom in on pages, which I found to be quite intuitive. 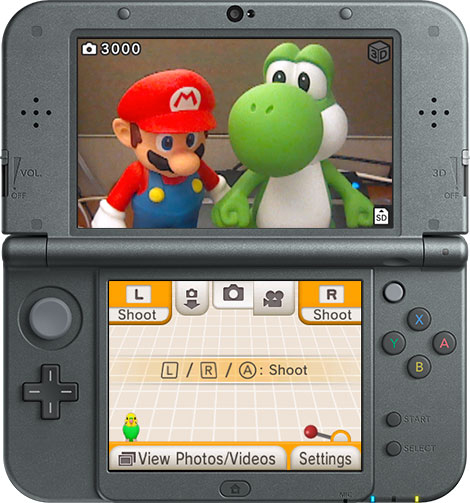 The camera in the original 3DS isn’t brilliant, and nor is the New Nintendo 3DS’s offering, though it has been slightly improved for photographs in low-light conditions. There’s a camera on the front of the device for 2D images, or you can capture 3D images viewable on the device’s display using the dual rear-facing cameras.

The New Nintendo 3DS now has NFC built-in, which means you’ll be able to play with Amiibo figures on your 3DS as well as your Wii U, simply by placing the figure on the lower 3DS display. Amiibo figures work with various different games to help you add new characters or customise them, get special bonuses, level up characters and more. 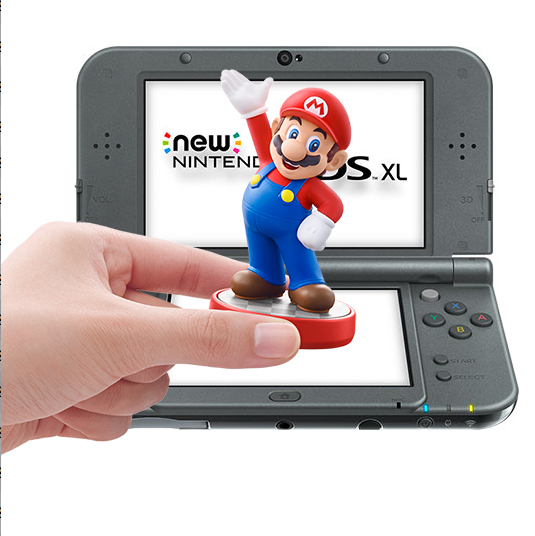 Figures available include Pikachu, Kirby, Yoshi, Donkey Kong, Link, Mario, Zelda, Sonic, Pac-Man, Charizard and more, and they’re constantly being added to as Nintendo creates more. These games companies sure do know how to entice more money out of you, don’t they? 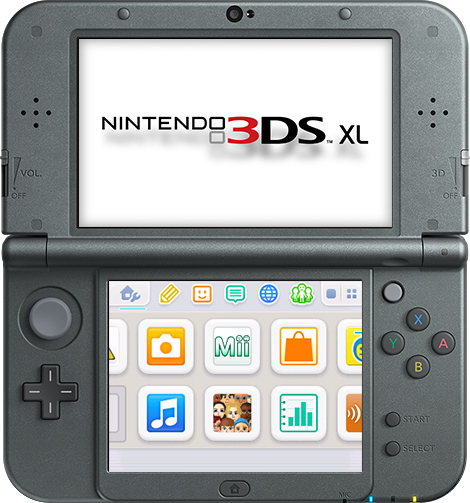 Aside from the aforementioned new buttons and C Stick, the overall design of the 3DS is essentially the same. There are two models available: the New 3DS with a 3.53in top display and a 3.02in bottom display, and the New 3DS XL which is slightly less portable but offers bigger screens at 4.88in and 4.18in so arguably a better experience overall.

Colours available for the New 3DS XL include a metallic red, black or blue, but there are some special edition models available from some retailers including a Majora’s Mask Edition with a gold cover.

The New 3DS is available in white or black.

For the smaller model, there are replaceable cover plates available to allow you to completely customise your device.

The other slight differences in design between the original 3DS models and the new models are the coloured buttons, repositioned game slot, stylus and volume slider, and repositioned Start and Select buttons.

New Nintendo 3DS vs original 3DS: Is it worth the upgrade?

The New Nintendo 3DS will cost you £149.99, while t he 3DS XL will set you back £179.99, and that’s if you want to buy the console by itself rather than as part of a bundle. Remember that 3DS models don’t come with a charger, so if you haven’t got one already you’ll need to factor that into the cost too.

The good news is that you’ll be able to play all of your old 3DS games as well as the DS and DSi games that came before it, so you don’t need to fork out for new games right away if you don’t want to.

For current owners of the 3DS XL, upgrading to the new model is quite a large expense for some tweaks that I’m not convinced are essential for enjoyment. Yes, you’ll get a significantly better 3D experience and it’s slightly speedier, but aside from that it’s £179.99 for what is, at its core, a device that will allow you to play the same games.

If, as a 3DS owner, you’ve been considering investing in a 3DS XL, now is the time to do it – not only will you get the bigger screen with the New 3DS XL but the other improvements will make it a better upgrade overall.

But if you consider the New 3DS’s price from a broader perspective, taking into consideration the price of other games consoles, it does seem a bit pricey. You can buy the Sony PS Vita (2014 edition) for around £150, and even the Nintendo Wii U for £160.

For most gamers, though, its value lies in the games available, so for Monster Hunter fans, Pokemon fans or fans of Nintendo’s many classics, paying the £150 or £180 for the New 3DS is a no-brainer.