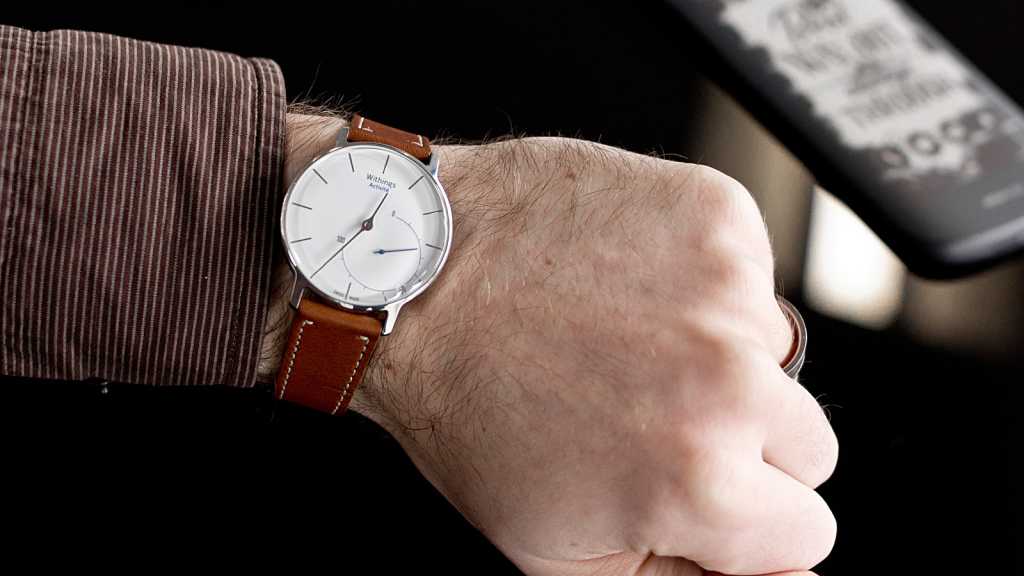 The Withings Activité is a stunning watch, the most attractive we’ve seen by a long shot. The design and build is exquisite and you can quickly glance at your daily steps progress. Other information is provided by the app and we like the sound of an eight month battery life. While it’s good to know Android support and tracking for swimming is on the way, the Activité isn’t a sure buy. The price is high and there are a few things missing such as a heart rate monitor, elevation tracking and any form of backlight.

There are plenty of smartwatches to choose from and the wearable market is ever growing. Here’s our review one of the only wearable gadgets which doesn’t look like one, the Withings Activité activity tracker. See also: The 15 Best Activity Trackers 2015.

If you’ve been watching every Tom, Dick and Harry launch wearable devices but always thought ‘I wouldn’t put that on my wrist’ then say hello to the Activité. See also: Fitbit Charge review.

Withings has focused massive amounts of attention on the style and design of this watch to make it stand out from the rest. As you can see from our photos, the device is simple stunning and available in both black and white.

The idea here is that the watch is fashionable and we’d say the firm has hit the mark with the Activité.

Designed in Paris, the Swiss-made analogue watch is housed in a ‘316L’ stainless steel case topped with domed ‘unbreakable’ sapphire glass. It’s supplied with a French calf leather strap (brown or black) but a silicone one is also in the box should you want to wear the Activité for sport and the like – see below. The straps can be easily swapped with no need for tools thanks to the quick release spring bars.

As well as its good looks, the Withings Activité is fully waterproof to a depth of 50 meters (5ATM) and unlike most wearable tech we’ve reviewed, the device is small and light – just 11.6 mm thick (which is exaggerated by the domed shape) and 37 grams in weight.

All of this is great and you probably can’t wait to get your hands on one but there is a barrier – the price.

With most smartwatches priced at around £150-200, the Withings Activité is the most expensive we’ve seen at a comparatively whopping £320. That’s the price of fashion we guess and perhaps the price isn’t too bad for a watch this good looking.

If you’re pockets simply aren’t deep enough to cope with the price tag, Withings has recently announced the Activité Pop – a cheaper and more plastic version which costs just £119 so you could almost buy three. It still looks pretty good and you can read our Activité Pop hands-on review from CES 2015.

Moving on from the design and price, let’s take a look at what the Activité can do. First things first, it’s not a smartwatch as we would define one – it can’t provide notifications and such like. What it is is an analogue watch with a fitness tracker built-in.

You can use it disconnected from a companion device but it will only store information for 38 hours without synching. When there is a connection, the Activité will change the time according to time zone automatically.

As you can see in the photos, there is your usual analogue hour and minute hands plus a third smaller dial. This shows your daily goal progress – currently how many steps you’ve taken out of a target 10,000.

Connected to a smartphone or tablet (see compatibility below), you use the free Health Mate app to get more detailed information about your activity. After all, the dial doesn’t give you an exact number.

Beyond steps you can get information on calories burned, distance and the amount of time you have been active. The device will automatically detect if you’re walking or running. It will also track sleep automatically if you are happy to keep it on in bed. You’ll get details on time it takes to fall asleep, duration, cycles and interruptions.

Via the app you can set an alarm and interestingly you can double tap the glass front of the Withings Activité to check what time it will go off (the hands will magically move then return to displaying the time). This isn’t obvious though and you need to stay still for five seconds before it will work anyway. There’s no way of stopping the ‘silent alarm’ which is a series of 12 vibrations.

Things it can’t do

You might think the Withings Activité is packed with tech considering the price, but it doesn’t have a heart rate monitor and doesn’t measure elevation. These are hardware things which can’t be added but a software update will bring new functionality soon – see below.

If you need to look at the watch in the dark then you’ll need to switch on a light because the Withings Activité doesn’t have a backlight nor is it glow-in-the-dark which is a bit of a shame.

There’s also one other thing to note, although it is pretty niche. If you own a Withings Pulse, you can’t use it at the same time as the Activité watch. To use both, you’ll have to have a user account for each device.

At the time of writing, the Withings Activité is only compatible with iOS 7 or higher (iPhone 4S and above). As you would expect it connects over Bluetooth but you don’t need a constant connection for the watch to function.

Android users will only have to wait until the end of February for support, though. You’ll need Android 4.3 or higher and a device with Bluetooth Low Energy.

If battery life is something putting you off buying one of the current crop of wearable devices, the Activité delivers a tasty eight months, according to Withings. The firm is even kind enough to supply a spare battery and you can change it yourself with the supplied tool. It’s pretty easy since it’s a standard button type (CR2025).

As well as the aforementioned Android support, the incoming software update for the Withings Activité will bring automatic detection and tracking for swimming.