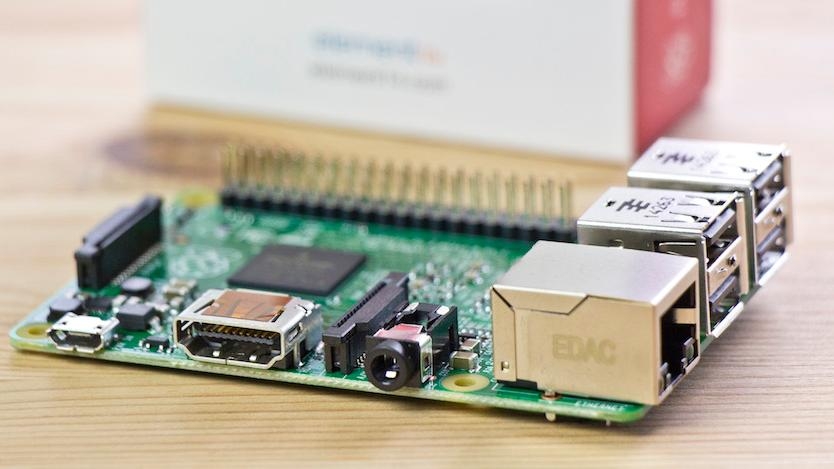 The Raspberry Pi 2 quadruples application processor cores from one to four, and increased clock speed from 700 to 900 MHz. We’ll update this first-look after we’ve made some tests of the new model. And we’ll see how much, in Eben Upton’s words, the Pi 2 can remove the caveat from ‘it’s a good computer… considering it only costs $35’.

The second slice of the Raspberry Pi is out – meet Pi 2. We get a hands-on with the new £30 developer board, which is said to be six times faster and runs Windows 10 – for free! No wonder it’s the best-selling PC in Britain ever, with five million units sold to date.

The computer-on-a-credit-card was originally conceived as an educational device for schoolchildren, but since its launch two years ago has proved a runaway success with electronics and computer hobbyists of all ages. The new Raspberry Pi 2 takes the same essential formula – integrated CPU/GPU chip, same size board, expansion IO pins – but updates a few key components to earn the Mk 2 name. See Best Raspberry Pi Starter Kits.

There have been revisions to the Raspberry Pi before, the most notable perhaps the Model B+ that launched July 2014 with a new USB controller. But the full Mk 2 sees a significant change in its main processor, which moves from one to four cores.

The processor that has powered every Pi until now has been the Broadcom BCM2835, actually a graphics rendering system-on-a-chip (SoC) that also made available a single 700 MHz ARM processor. This was based on the ARM11 microarchitecture; and confusingly takes an ARMv6-architecture core. Most of its processing clout was invested in its graphics engine though, a VideoCore IV graphics processing unit. The original Pis included either 256 MB memory (Model A) or 512 MB (Model B and B+).

The Raspberry Pi 2 Model B goes one better, with its Broadcom BCM2836 chip. This gives the Pi 2 four application processor cores – turning the little Pi into a quad-core PC no less – and also moves the architecture up to ARMv7. This architecture development has important ramifications for what the new Pi 2 can do, especially when pressed into service as a baby personal computer.

The last revision to Model B+ moved the system memory away from the main Broadcom SoC (where it was sited right over the top of the BCM2835, in package-on-package [PoP] fashion), to the underside of the circuit board. The Pi 2 keeps this layout but crucially expands total system RAM to 1 GB. Do note that this memory is shared with the GPU though.

We were present at the Raspberry Pi 2 launch in central London on 2nd February 2015. Here we heard that the Pi 2 is again being manufactured in a Sony factory in South Wales, and promoted by distributor Element 14 (née Farnell). Raspberry Pi Foundation founder Eben Upton was joined by designer Pete Lomas; and from Element 14, Global Head of Raspberry Pi, Claire Doyle.

When the original Pi was conceived, its designers anticipated selling maybe up to 100,000 total; now 35 months later in excess of 3 million have shipped.

The new model, Upton told us, is around six times faster than the original series, although different benchmark tests will return different results. Some tests indicate a 2x speed-up, while some show even faster performance than the 6x figure quoted from Sysbench. Upton believes that the ARM cores can take more use than most applications currently demand.

The surprise for some was mention of Windows 10 and Raspberry Pi in the same sentence. But since there will be a new Windows compiled for ARM, there may be a role for the Pi 2 powering peripheral internet-of-things (IoT) devices. To be clear, only a stripped-down Windows 10 for internet-connected devices has been mentioned – that’s not the same as running the full consumer desktop edition of Windows.

Microsoft has confirmed in a blog post that “Windows 10 will support Raspberry Pi 2, which will be free for the Maker community through the  Windows Developer Program for IoT later this year.”

The third most popular desktop OS can already be run on Pi 2 – there is a build of the regular desktop edition of Ubuntu Linux, which like Microsoft’s OS can take advantage of the new ARMv7 architecture.

Until we try the latest Raspian build and the current alpha version of Ubuntu (known as Snappy), we will defer to a demonstration of the Pi calculating pi.

In a wonderfully circular demonstration of the 16th letter of the Greek alphabet, two Raspberry Pis were set up to calculate pi – a Mk 1 Model B+ and a Mk 2 Model B. They were both running the same Raspbian build (1.3.12), and sure enough the Pi 2 trumped the slower Model B+.

Eben Upton expressed the difference in performance as being most evident in the responsiveness of the user interface of a running operation system: ‘It feels snappier and applications load faster’.

We will update this review once we’ve loaded one of the latest OS builds on to a microSD card and tried comparing with an original Raspberry Pi Model B.