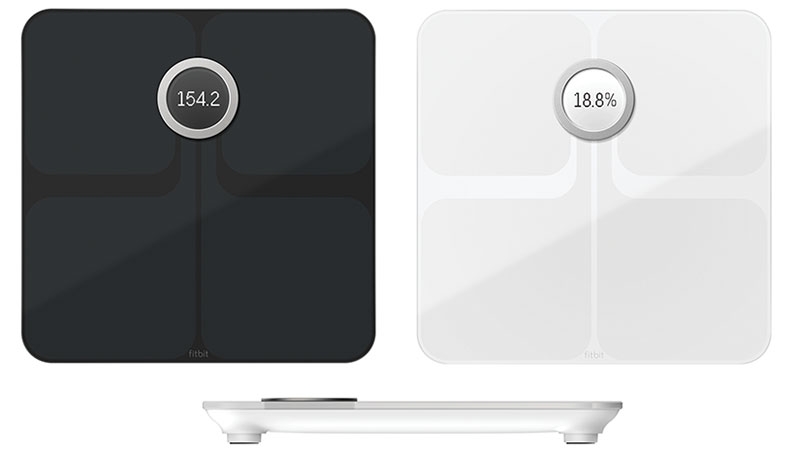 The Fitbit Aria 2 scales works seamlessly with Fitbit’s dashboard and mobile apps, plus all its activity trackers, such as the Aria, Charge 2 and Ionic. You could use it without the trackers but together they make a great fitness or weight-loss team. Aria 2 shows fewer stats than the more expensive Nokia Body Cardio, but everything you need to know at weigh in. It measures weight, Body Fat Percentage and Body Mass Index, and syncs this data wirelessly and automatically to your Fitbit account. If weight loss is one of your fitness goals, the Aria 2 is a great tool to combine with your Fitbit activity tracker.

Fitbit might be a market leader in wearable tech but one of its products cannot be worn on the body. If you did, you’d be using it as weights rather than it reading your weight.

The Fitbit Aria 2 is a smart scale that measures your weight, body fat percentage and BMI (Body Mass Index). It wirelessly syncs these stats with your Fitbit Dashboard and mobile app, and is a great partner for the Fitbit activity trackers.

The company now sells a cheaper set of scales: the Fitbit Aria Air, for £49 / $49. These lack the body fat percentage reading, which is a better metric than BMI for evaluating your weight health, and require you to have your phone with you when you weigh yourself.

The Aria 2, you won’t be surprised to learn, replaces the original Aria that was released a few years ago. There aren’t many functional changes to the first Aria. Instead it has been “reengineered for greater accuracy, easy setup and an improved interface”.

Registering and recognising multiple (up to 8) users is easier, and each is given an icon so you can recognise that you have indeed just weighed yourself rather than your weight being recorded for another person. This was possible too with the Aria 1 but is a neater setup with the 2.

The Aria 2 also has improved grip on its feet. Don’t put the scales on carpet as the accuracy will be compromised if the ground isn’t a hard surface. And always weigh yourself in bare feet to allow for the Body Fat and BMI calculations.

There aren’t many tech gadgets that you stand on but the Fitbit Aria 2 is one of them. See our round-up of the Best Digital Smart Scales.

It is part of the Fitbit fitness and health family that famously includes the popular activity trackers. See: Which Fitbit is best?

Powered by four AA batteries (the scales will tell you when the batteries need replacing) the Aria 2 is certainly one of the most stylish scales available. It is available in chic black or white, topped by 0.3 inches of glass.

The LED display is clear and can be read easily even through blurry just-woke-up eyes. The Aria 2 has a new digital interface, but the main difference to the Aria 1 is the icons for different users, and a wavy logo when it’s doing its calculations.

Your Aria stats sync wirelessly (and privately) to the Fitbit app. You can set a weight goal and monitor your progress in the Fitbit app, and you’ll gain awards and badges as you go.

Body fat percentage is the total mass of fat divided by total body mass; body fat includes essential body fat and storage body fat. For most women, 25-35% is a healthy range. For men, it’s closer to 18-25%. Younger people, athletes and fitness fanatics should be at the lower end of the scale, or lower, if possible.

Body fat percentage is not a reliable health/weight metric for children who are still growing.

Remember that we all need some fat for temperature regulation, hormone production, vitamin storage and other vital things.

Visceral fat, which is the stuff stored in your belly and around your major organs, is the most harmful fat. High levels can increase your risk for diabetes, heart disease, stroke, artery disease, and some cancers. These scales can’t tell you about visceral fat, but if your body fat % is high, you may want to visit your doctor for further tests after you’ve tried to reduce the percentage through sensible diet and exercise – which most Fitbit users are aiming for.

The Aria 2 measures body fat percentage by using a body impedance method. It has four sets of ITO electrodes that shoot a small 180 micro amp current up one leg and down other to measure body impedance.

(Electrical impedance is the measure of the opposition that a circuit presents to a current when a voltage is applied. Body impedance uses a current to ascertain body fat percentage. Pregnant women and people with heart pacemakers shouldn’t use such digital scales.)

No electronic scale is going to be super accurate at body fat percentage rating, but the Aria 2 will give you a decent idea. Because this measurement can be subjective, the Aria’s body fat reading may not match other scales or the results of manual methods such as calipers, says Fitbit.

The esteemed writer Kirk McElhearn, who has been using digital scales for a couple of years, thinks you might get more accurate body fat readings after a shower and light foot towelling as the humidity on feet makes for better contact.

BMI stands for Body Mass Index. It looks at body fat in relation to height and weight and tells you if you’re in the healthy range.

If you have a BMI above the healthy range you are at raised risk of the serious health problems linked to being overweight, such as type 2 diabetes, heart disease and certain cancers.

A BMI between 18.5 and 24.9 is a healthy range, showing that you’re a healthy weight for your height. Below that and it suggests you are underweight. Above and you’re overweight, according to the BMI rules. Over 30 and I’m afraid that the BMI rules say you’re obese.

Of course, if you have lots of muscle weight then the BMI might not mean much to you. But you’ll know in your heart whether those extra pounds are muscle or fat.

The Fitbit Aria 2’s LED display identifies you by your icon, then displays your weight and body fat percentage. It then shows you that it is syncing that data to your account.

The Aria 2 recognizes up to eight individual users, so works for the whole family. Some find setting up for different individuals a bit tricky but once done the scale works out who’s who using historical data. Everyone’s info is private by default.

Fitbit devices aren’t compatible with Apple’s HealthKit, but the iOS app Sync Solver can sync your Fitbit data from an iOS device to Apple’s Health app.

Fitbit tracker users don’t need to have an Aria scale too but its wireless syncing with the Fitbit account means you don’t have to manually input your weight. Simply step on the scales and the Aria does the rest.

As with any scale make sure that it’s in the same place each time you weigh yourself, as scales can give different readings depending on the flatness of the floor. Don’t put it on carpet as it will make you lighter, which is nice but cheating.

Placing the scales in the same place and weighing yourself at the same time each day should give you consistent readings.

Fitbit suggests that if you have concerns about the scale’s accuracy, you should weigh yourself at least five consecutive times. By the fifth weigh-in, you should see accurate measurements consistent within 1lb.

As mentioned above there aren’t a great many new features on version 2 of Fitbit’s scales. Accuracy has been improved, which obviously is great. And setup and syncing improvements are welcome.

Should Aria 1 owners upgrade? We’re not sure these improvements are worth shelling out £119.99 or $129.95 for. Indeed in the UK the Aria 1 cost at £99, so Fitbit has raised the price there, while the US price stays the same.

But for new purchasers the Aria 2 makes sense, albeit now a rather expensive choice – although if it helps your weight-loss plan, then it will represent good value. When looking for discounts online (see our best-price widgets at the top and bottom of this review) check that you’re looking at the Aria 2 rather than the original, unless you don’t mind saving money on the older model.

If you are comparing Aria 2 and the newer Aria Air, read our  Fitbit Aria Air review. Basically, the cheaper Air lacks the body fat percentage reading, and connects via Bluetooth rather than Wi-Fi, which means you need your phone with you when you weigh yourself, with the Fitbit app open. That’s a bit of a hassle, but the price difference is significant.

The slimmer but slightly larger Nokia Body Cardio scales show many more body stats – such as water & bone mass, and standing heart rate. Nokia recently removed the odd (but sounds great) Pulse Wave Velocity metric for “regulatory reasons”. It also shows you what the weather is forecast to be like, which might help runners planning their daily exercise; and most handy of all (and a rather obvious miss on the Aria 2) info like difference in weight to your last weigh in, which we’d love Fitbit to add to the Aria 2 rather than force you back to the app for such information.

While the Aria 2 shows less body stats, it covers the basics very well, and it’s all most people need from a set of digital scales. It’s also a fair bit cheaper and, most importantly, works with the excellent Fitbit app – which will be important for users of the Fitbit trackers.

People not using a Fitbit tracker (and we think you should) might be better off with the Nokia scales for the extra stats and weight trend display on the scales themselves. The entry-level Nokia Body+ scales start at £69.99 or $99.95 online.