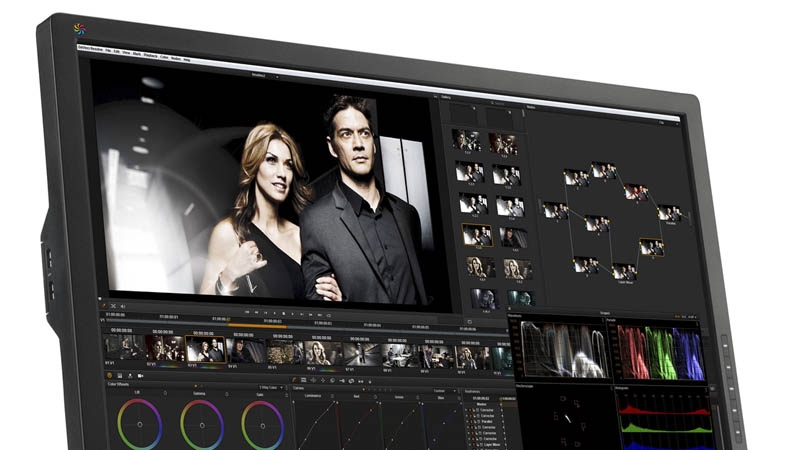 The HP DreamColor Z27x is a high-performance 2.5K monitor suited to some professional applications. As a company HP is entrenched in Windows, where the panel worked better than with the graphic designer’s traditional choice of Mac OS. For any user though, the Z27x offers great build quality and comprehensive setup and adjustment functions while still maintaining essential ease of use.

The HP DreamColor Z27x is a large 27-inch desktop display with a healthy pixel count of 2560 x 1440. This leads to a pixel density of around 109 ppi, which helps to reduce visible pixellation. Compare this to monitors with just 1920 x 1080 pixels in the same sized panel, which at 82 ppi appear somewhat coarse when viewed at typical operating distances. See all display reviews.

This panel is far from Retina-class though – that requires around 220 ppi when viewed at normal PC working distances – but it does match the pixel density of a full-HD panel sized around 19 inches along the diagonal.

The DreamColor Z27x is aimed at professional users who will pay for the extra quality – and that includes improved build and operational details, as well as better image quality. At around £790 inc VAT it’s considerably cheaper than the former price of 10-bit IPS panels, which were once closer to the £2000 mark.

If the price seems to good to be true compared to 10-bit panels a few years ago, it’s this isn’t a 10-bit panel. An updated technology trick has given manufacturers a marketing loophole to let them promise 10-bit colour, even though the panel is still only an 8-bit design.

As we’ve seen with similar products from LG and BenQ recently, the HP takes an AH-IPS display of 8-bit technology. The LG-made panel used here cleverly fudges the additional colours available to 10-bit native screens through a temporal dithering technique called frame-rate control (FRC), where pixels alternate at high speed between two colours that are available to 8-bit panels, to fool the eye into seeing a third 10-bit colour-space hue. While this does allow HP to list ’10-bit color that drives up to 1.07 billion onscreen colors’, there can be side effects from this cost-cutting measure.

Build quality of the DreamColor is workmanlike but among the best on the market, with a sturdy fully adjustable pillar stand and robust charcoal-grey panel chassis. The LCD panel is supported in a frame with a 20 mm bezel all around.

Two DisplayPort 1.2 ports are available plus one HDMI 1.4 port. With the help of the increased bandwidth of DP 1.2, for instance, the HP DreamColor can also accept incoming 4K video (specifically up to 4096 x 2160 pixels), which is then downsampled for viewing on the available 2560 x 1440 native panel. Framerate (vertical frequency) is limited in this case to 24 progressive frames per second though.

The on-screen menus stand out against the generic and often labyrinthine options found on cheaper consumer monitors. A vertical array of five real press buttons run up the right side of the bezel, from where it’s a simple operation to dig deep by pressing the button alongside the changing OSD text options. Important information like current working colour space, video delay, serial number and firmware revision can all be called up quickly. (There’s also a pull-out tab on the left, with the hardware essentials indelibly printed on plastic, for handy reference in tech-support situations.)

We tested the main parameters of image quality with a Datacolor colorimeter, connected to a regular 8-bit graphics adaptor on a MacBook Pro (15-inch, Retina, Late 2013).

With the panel set to native colour space, we measured 96 percent sRGB coverage; and 85 percent NTSC and 90 percent Adobe RGB.

Power consumption was relatively low, reaching a maximum of 58 W at full panel brightness, and drawing 33 W at a setting of 120 cd/m2.

Judged subjectively, the panel image was cleanly viewable from all angles. Viewed up closer there was some grain clearly evident, likely from the 3H anti-glare hard coating. This was especially visible on white backgrounds such as text documents.

Text was reasonably sharp and clear, if not quite as defined as we saw from the AOC Q2770PQu, for example, a 27-inch monitor that employs a Samsung-made PLS panel.

Some chromatic aberration was also visible on high-contrast edges. This is comparable to the coloured edge highlights found in lower-grade optics, known to photographers as ‘purple fringing’. The effect on this HP display was subtle; but once seen users with sensitive vision may find it difficult to ‘unsee’ it. It was most apparent when the Z27x was used with OS X rather than Windows, and may be an artefact of the OS’ sub-pixel rendering, or from LG’s Hi-FRC technique for artificially extending colour depth.