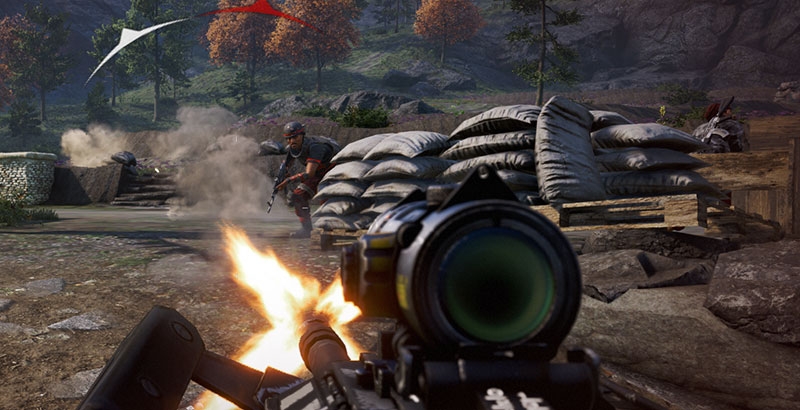 Big, brash and chaotic, Far Cry 4 is perhaps not a huge step on from Far Cry 3, but it’s more (much more) of a good thing.

Far Cry 4 offers little to surprise anyone who played 2012’s Far Cry 3, but frankly it doesn’t need to. Refining a manic open-world shooter formula is more than enough, for the time being at least.

The setting moves from a tropical island to a despotic Himalayan kingdom, which means more diversity of environment. Icy mountain-tops, high-altitude shrines and verdant plateaus mix the aesthetic up nicely, but they also allow for a wider spread of wildlife. Which you will shoot or stab on sight, whether or not they’ve taken a pop at you first. This is probably not a game for vegetarians.

There is a main campaign, which tries very hard to introduce big characters and zingy lines, but often collapses into irritation for it. Far Cry 4 holds together an awful lot better when the storyline missions are put on the back burner in favour of ad-hoc chaos as you travel across its large map, looking for or inadvertently getting into trouble.

It’s not exactly a convincing living world, but rather a violent theme park wherein you can stumble into an armed convoy, a murderous honey badger or a heavily-defended fortress at any point and wind up having a micro-adventure you hadn’t expected.

To some degree, there’s repetition – this is a playground for guns, not a roleplaying game – but it hangs together because you’ll tend to get diverted from whatever your current objective was. A plume of smoke over there has to be investigated, a guy at the side of the road being attacked by a crazed eagle really needs saving, or a gyrocopter on a clifftop must be flown. This is a game which positively rewards a low attention span, and it’s so madcap about it that it rarely feels like a grind.

On the other hand, the ‘real’ game is about clearing endless icons off the map. At each, a new mini-game of sorts: seizing an enemy outpost, a race against time in a rickety car, hunting a rare animal, climbing to the top of a skyscraping observation tower. While none of these are boring (for the reasons mentioned in the last paragraph) think about it too much and it’s hard to overlook the inherent shallowness of it. Farmville style, you’re hoovering up icons because you feel you’ve gotta catch ’em all rather than because you necessarily want to do the activity at each.

Between this and the sometimes screechy, ugly characterisation and dialogue, Far Cry 4 can come across as a dumb, nasty game. It knows it, too – characters in the game draw attention to it, mocking the unreality of the world and the reflexively brutal behaviour of the player. It doesn’t really get away with being meta, but it does get away with its shallowness because the shallowness is often a huge amount of fun – explosions, rampaging animals, hordes of reinforcements, dramatic car chases, all that good stuff. Better still, the entire campaign can be played co-operatively, so you can enjoy on-the-fly chaos with a chum.

It’s also a decent stealth game if you want it to be. Pick up the right weapons or choose the right character upgrades and you can wipe out everyone in a fort without being seen. Again, this is nothing especially different from Far Cry 3, but there are far more opportunities to use it.

As a package, Far Cry 4 is great – far more opportunity for straight-up thrills than most of the comparatively stifling, self-regarding shooters of the last year. Individual elements – especially the main campaign – don’t work so well or seem too vacuous on close inspection, but all put together, it’s quite a party.