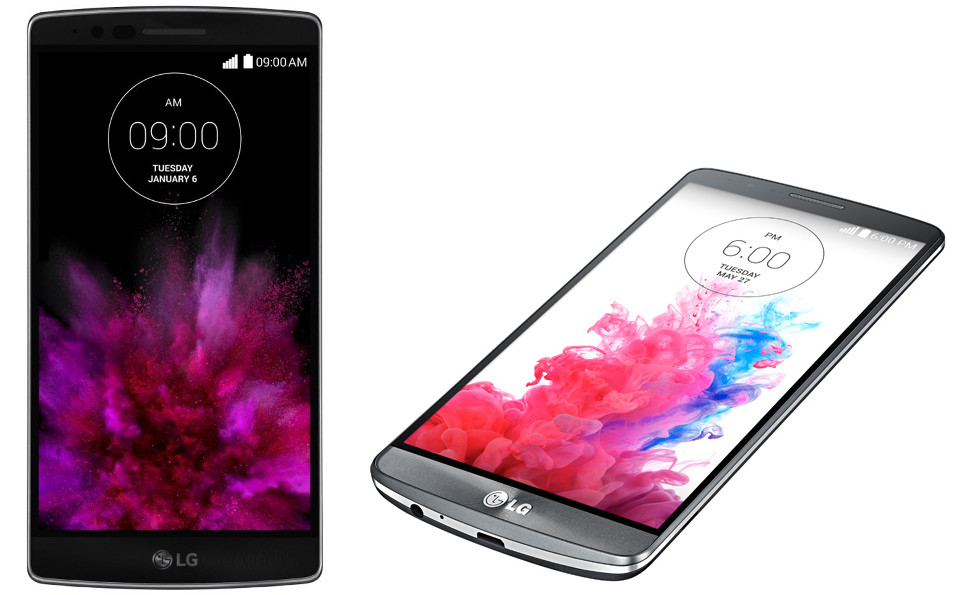 Price, performance and battery life remain unknown, although we can make solid assumptions on each. But on most other levels the LG G Flex 2 either matches or bests the LG G3. It is thinner, although heavier. But it has a newer OS (for now), the same camera, better storage and connectivity options. The LG G3 retains the edge only in terms of its market-leading display. In the end you have to decide whether you prefer the LG G3’s stunning display, or you are prepared to sacrifice that for a decent display and a curved design. Given that the LG G Flex 2 is such a good-looking device, we would opt that way. Your view may differ.

The LG G3 was our smartphone of 2014, and remains a must-have in this fresh new year. A flagship smartphone with an extraordinary display, it is a well-priced example of the best that modern smartphones can be. The G Flex 2 is LG’s second-generation curved Android smartphone. An interesting idea, the original Flex’s convex design was ergonomic, but various elements let the device down and prevented us from recommending it. Not so with the LG G Flex 2, which is refined and much more desirable.

When the LG G3 launched it was £479, a good price cheaper than rivals since flagships tend to be between £500 and £600. As per usual, that price has gradually dropped and you can pick the phone up for around £430.

Nothing has been confirmed price-wise for the LG G Flex 2, but this will be a high-end phone. LG traditionally prices its flagship smartphones around £100 or so lower than its rivals, so we should be looking at around £499 SIM-free. A claimed ‘leaked’ listing have the LG G Flex 2 at €599 though, so we will see. It will be available exclusively at Vodafone for the first six weeks.

Expect the big and bold LG G Flex 2 to cost roughly the same, or a little more, than the LG G3. And as the latter is newer the street price will likely be bigger for the bigger phone.

The LG G Flex 2 looks the same as the original G Flex but it’s smaller and lighter, which is exactly what we hoped would be the case – it’s 7.1 mm at the thinnest point and 152 g. It feels lovely in the hand and the curve of the phone matches the contour of your face much like a traditional landline phone.

The G Flex 2 comes in Platinum Silver or Flamenco Red with the latter looking particularly stunning. Furthermore on the design side is an improved version of the self-healing coating which graces the rear cover. This was introduced with the original G Flex but now takes seconds to perform its magic rather than minutes. LG’s demonstration at CES with wire brushes was certainly impressive.

By contrast the LG G3 is more of a functional-looking device. It’s just 8.9mm thick – impressive considering all the tech that is squeezed in, but thicker than the LG G Flex 2. At 75 x 146mm in size, however, the G3 is a large phone only due to its bigger screen size. Because of its tiny bezels the LG G3 feels like it is all display – a relatively small handset with a huge screen. It’s an impressive achievement.

The LG G3 may be thicker than the G Flex 2, but at 149g it remains lighter. There’s a brushed metal frame running around the edge which separates the front from the back. The rear cover is removable and made of plastic but has a ‘metallic skin’ which has a brushed finish and is scratch-resistance – not self-healing like the LG G Flex 2.

Overall the G Flex 2 is arguably more stylish, but both are well-designed and -built handsets. And the although the G3 is thicker, the G Flex 2 is heavier. Also see: Best budget smartphones of 2015.

The LG G3 features an impressive 5.5in display. This has a resolution of 2560 x 1440 which means a pixel density of 534ppi. It’s the highest resolution smartphone money can buy, and it’s higher than the vast majority of PC monitors, which are typically bigger than 20 inches.

The new G Flex 2 has a similarly sized 5.5in screen with a lower 1920 x 1080 resolution. That gives a pixel density of 403ppi – in essence the same as the iPhone 6 Plus. The bump in resolution to Full HD is much needed and the P-OLED display is now nice and crisp although a little way behind that of the LG G3. It’s certainly no slouch.

We’ve not had enough hands-on time to come to a conclusion about whether LG has solved the image retention issues we saw on the G Flex. What we can say is that it is a good display, that cannot quite match up to the greatness of the LG G3’s.

Under the hood of the G3 is a 2.5GHz Qualcomm Snapdragon 801 quad-core processor and an Adreno 330 GPU. The amount of RAM varies on the G3 depending on what storage capacity you buy – 2GB at 16GB and 3GB at 32GB. A highlight of the G Flex 2 is the Snapdragon 810 processor, making it the first officially announced smartphone to feature Qualcomm’s new 64-bit chip. Depending on country, the phone will have either 2 or 3GB of RAM (it is 2GB in the UK).

Both of these handsets offer stellar performance. (Also see: What’s the fastest smartphone of 2015).

The LG G3 offers both 16- and 32GB variants of storage, with a microSD card slot that can accept cards up to 128GB. The LG G Flex 2 also offers 16- or 32 GB of internal storage. There’s also a microSD card slot which states it can take a whopping 2TB in the spec sheet – by far the highest we’ve ever seen.

That’s a win for the G Flex 2 in terms of storage.

The LG G3 has 4G support, Wi-Fi, Bluetooth 4.0 and NFC, as well as an IR blaster and wireless charging. Dial over to the LG G Flex 2 and there’s a strong line-up of wireless tech with 11ac Wi-Fi, Bluetooth Smart Ready (Apt-X) 4.1, NFC, SlimPort, GPS and 4G LTE. That’s pretty even, with a narrow edge to the G Flex 2.

The LG G3 has a 13Mp camera, and LG has been kind enough to include laser auto focus. You also get software features such as Gesture Shot and Touch and Shoot, as well as 4K video. The front camera is a 2Mp snapper.

It’s good news for the LG G Flex 2 that when we look at the camera we see the same 13 Mp rear camera which is found in the G3. So as cameras, both of these phones is a class act with OIS+ (optical image stabilisation), dual-tone LED flash and that laser auto focus. At the front of the G Flex 2 is a standard 2.1Mp selfie camera.

The LG G3 runs Android 4.4 KitKat with LG’s user interface which has a flat, modern style and uses the circle as a motif throughout. However, LG does add features such as

KnockON (turn on the phone with a double tap) and apps like QMemo+. The flagship G3 also records your steps each day, like a low-grade activity tracker. We’re told to expect an upgrade to Android L, but we haven’t yet seen it on our LG G3 here in the UK.

It’s good to see Android 5.0 Lollipop pre-loaded out of the box on to the LG G Flex 2. The interface is very similar to that of the LG G3 with the firm’s own UX. A nice new feature is called Glance View and allows you can quickly see key information such as the time and notifications when the screen is off with a downwards swipe.

Android L beats KitKat, so in the absence of an upgrade on our LG G3 we’re minded to lean toward the LG G Flex 2, here.

The LG G3 has wireless charging and a 11.1Wh (3000mAh) battery cell. The G Flex 2 also has a decent sized 3000 mAh battery which LG says can be charged from 0 to 50 percent in just 40 minutes. The G3 has good battery life of a day and a half with light use, and around a working day of regular use. We haven’t yet had time to properly test the LG G Flex 2, but expect similar.

Price, performance and battery life remain unknown, although we can make solid assumptions on each. But on most other levels the LG G Flex 2 either matches or bests the LG G3. It is thinner, although heavier. But it has a newer OS (for now), the same camera, better storage and connectivity options. The LG G3 retains the edge only in terms of its market-leading display. In the end you have to decide whether you prefer the LG G3’s stunning display, or you are prepared to sacrifice that for a decent display and a curved design. Given that the LG G Flex 2 is such a good-looking device, we would opt that way. Your view may differ. Also see: Best smartphones 2015 and Best Android phones 2015.