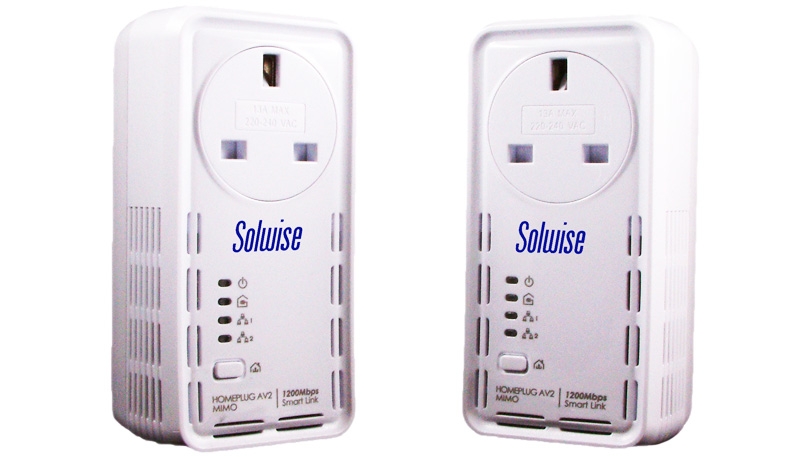 The Solwise SmartLink PL1200AV2 Passthrough PIGGY (why PIGGY??) HomePlug Adapter might have an over-long name but it is one of the fastest Powerline adapters we’ve ever tested. In a straight fight with its nearest competitor, the better-looking but bigger Devolo 1200+, it aced the speed tests by a whisker. It features two Gigabit Ethernet ports and a Passthrough socket just like the Devolo, but is a third cheaper. There’s no Wi-Fi model but pound for pound it’s hard to fault this super-speedy Powerline adapter. Don’t forget that you need two to make a network, and can add extra if you want to network other rooms, too.

The Solwise SmartLink 1200AV2 Pass-Thru HomePlug Adapter (also weirdly named the PL-1200AV2-PIGGY) is a Gigabit-rated Powerline adapter that’s up there with the fastest in the category.

Powerline adapters create a fast home network in a matter of minutes. It really is Plug & Play. Read more on What is Powerline and read our Best Powerline Adapters round up.

You need two adapters to create a home network that will speed up Internet performance around the house, and beat the pants off home Wi-Fi.

Plug the first adapter into a power socket near your Internet router, and then attach them together using the supplied Ethernet cable.

Then plug the second adapter into a power socket near where you need the wired connections, so next to the devices such as smart TV, Sky+, Tivo, games console, Apple TV, etc, that will benefit by being connected to the network via Ethernet.

Connect the devices to the second adapter and that’s it!

Powerline adapters have now reached speeds that can boast Gigabit Ethernet on the box.

As we’ve seen with all Powerline products, what’s written on the box never equates to real-world performance. These are theoretical maximum speeds, and are way higher than you’ll get at home.

So the only way to properly judge which Powerline to buy is to test adapters side by side in a common environment.

We tested the Solwise 1200AV2 against the Devolo dLAN 1200+ Powerline Adapters to see which is fastest.

Both of these state-of-the-art Powerline adapters use the latest QCA 7500 chipset (which offers enhanced processing power) and employ MIMO (Multiple Input Multiple Output) and Gigabit Ethernet ports, so should be close to each other in terms of performance.

Both are able to transmit on any two of three plug pairs: Live, Neutral and Earth.

We test every Powerline adapter under common conditions to get a fair comparison on speeds. This does mean that our speed tests might not duplicate what you get but you can be confident that what we find is faster should be faster in your home too.

In our fastest-possible test, where the two adapters are placed next to each other – hardly a real-world situation but a theoretical test on straight-line speed – the Solwise 1200AV reached an impressive 410Mbps, which is the fastest we’ve tested so far.

That’s no 1,200Mbps, but, as mentioned above, that’s a theoretical max speed only. Real-world speeds will always be slower, no matter which Powerline you buy.

The Devolo 1200+ was close, at 357Mbps. Both smashed the previous fastest 186Mbps result seen on the previous 500Mbps Powerline models.

In our real-world tests the second adapter is placed in a room two floors down from the base unit and modem/router – in a Victorian terraced house. We think this will mimic an average UK home to give you a fair comparison.

The two 1200 Powerline adapters again scored a lot faster than the average 88Mbps we saw with 500Mbps Powerlines. The Solwise PL1200AV2 bolted through our 1GB file transfer test in 77 seconds, registering 107Mbps. (The Devolo was mighty close at 105Mbps.)

Both are easily fast enogh to tackle streaming HD video and improving your performance on online gaming, as well as speedimg up your home network.

Two Ethernet ports are better than one if you need to connect more than one device to your network. At my home I could really do with three – one for my smart TV, one for the Sky+, and another for my smart thermostat gateway, but two should suit most homes.

You can always buy another single adapter or even an Ethernet Switch to multiply the Ethernet ports.

Again both Solwise and Devolo are very similar. There’s a wireless version of the Devolo, which can create a new, fast Wi-Fi hotspot in the second room, but this costs £159.95 for the two adapters; £119.99 for the non-wireless version.

While we prefer the looks of the Devolo, the Solwise is smaller. And cheaper!

Another difference is that the Devolo parks its ports on the top of the adapter, which is better if your power sockets are close to the floor or skirting boards.

The Solwise packs its ports at the bottom of the adapter, which can be neater as long as your sockets are positioned higher up.

The Solwise security is supported by a 128-bit AES Hardware encryption, protecting the network communication from eavesdroppers and hackers.