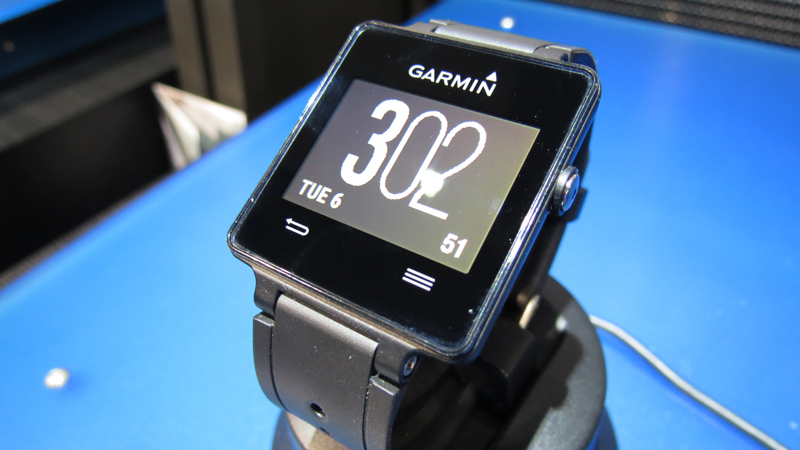 For me, Garmin’s Edge remains a delight but while the Vivoactive hasn’t won me over, it’s an affordable and attractive option for swimmers, runners and golfers. There are better ‘general’ activity trackers, and it’s a shame that Garmin didn’t integrate a heart-rate monitor. But if the information on offer is what you’re after – and you need GPS – it’s not a bad deal.

The Garmin Vivoactive is a sports-oriented smartwatch which has built-in GPS (unlike many smartwatches) which means you don’t need to take your phone with you on a run or cycle. See also: Best smartwatches 2015

Garmin has opted for a square design for the Vivoactive. We prefer the look of circular smartwatches but wouldn’t say that the Vivoactive is unattractive. It’s available in either black or white, and is fairly thin at 8mm though perhaps too large overall for those with dainty wrists.

Its display is 1.13 x 0.8in, and has a resolution of 205 x 148 pixels. It’s a full colour touchscreen designed with outdoor use in mind, apparently readable in sunlight but we’ll have to wait until we can get one outside to test that.

There are interchangeable bands available for the Vivoactive watch so you can pick a design that suits your style. With the band included, it weighs 38g. 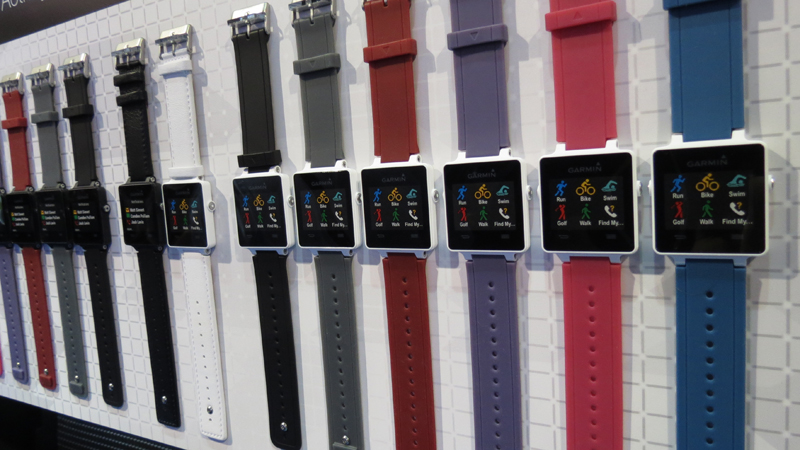 The Vivoactive runs Garmin’s own software rather than Android Wear, and has built-in sports and activity-tracking apps. It can track activity and GPS-based data while the user is walking, but also while running, cycling, golfing, swimming (it’s waterproof up to 50 metres), and more. It has the usual built-in accelerometer and pedometer in addition to compatibility with optional speed trackers and heart-rate monitors too.

In addition to the fitness features, the Vivoactive can connect to an Android or iOS device to give you haptic and visual notifications including incoming calls, texts, emails, calendar alerts, social media notifications and more, and of course, it can tell you the time.

The Garmin Connect Mobile app will automatically sync with your Vivoactive to give you a post-run summary, which will include calories burned and distance travelled and will let you know whether you exceeded previous personal records.

Thanks to its water resistance, you can indeed swim with the watch and, once you tell it you’re swimming, it will count strokes, time and distance. While running you can see time, distance, pace and calories, plus there’s auto pause when you take a break, and auto lap for those circuits around Richmond Park. The Vivoactive doesn’t measure heart rate directly, but it’s compatible with Garmin’s heart-rate chest straps and will display heart rate and zone on the display.

There’s even a golfing mode where it will display the hole number, par and distance to the hole (thanks to that built-in GPS), along with your scorecard. You can download course maps from Garmin – there are more than 38,000 of them from all over the world – to enhance your play.

And like Garmin’s Vivofit, the Vivoactive will give you move reminders – if you want them – through the day and work like an activity tracker.

The Connect IQ store allows Vivoactive users to customise various aspects of the smartwatch, including watch faces and widgets, and allows the installation of additional apps.

Other features include the ability to control your music and locate your smartphone, as well as a Live Track feature that lets others track you in real-time (handy for marathon runners, perhaps), and an automatic notification that alerts you if you’ve been idle for too long.

Garmin claims the watch has a three-week battery life and 10 hours with GPS active. The device alerts you to and provides access to calls, calendar reminders , texts and email through a Bluetooth connection to your main device, in my case an iPhone 5.

As a cycle-tracking device the Vivoactive falls short of its cousins in the Edge range of cycle computers. It works with Garmin’s speed/cadence sensor (and HRM) but these have to be bought separately. Where it did offer an advantage, in my experience, is that the Vivoactive found and retained a GPS signal more easily in built-up city environments, making for more accurate route data when compared to the Edge on the same ride from central London to the North Downs.

But the usability and responsiveness of the touch screen let it down, especially when compared to the simple four button system of the Edge devices. Add in wearing riding gloves and a very slow screen response rate and the package is not – for the committed cyclist – a way to cut down tech on your wrist, handlebars or pockets. Given the popularity of the Strava smartphone app and the fact you must carry your smartphone with you, I can’t see why a cyclist would bother.

Away from the sweat, mud and pedals Vivoactive is – as almost all Garmin devices are – well made and attractive in a retro-1980s digital watch kind of way. As a child of the 80s this appealed to me. What didn’t appeal was having to charge yet another device. Vivoactive requires a proprietary charger, again very well made, but forget this as you fly off to your cycling holiday in Majorca and you’ll be out of power all too soon.

My biggest complaint, though is the screen’s slow response time which meant access to your smartphone apps via the Vivoactive wasn’t as impressive or useful as we’d hoped. Plus, reading texts and emails on such a small screen was a step backwards in usability compared to whipping out your phone. The notifications were handy, though, especially incoming phone calls.