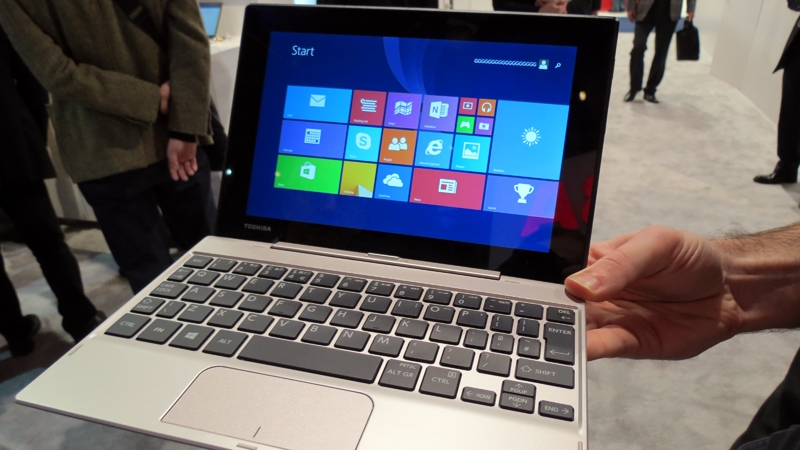 The Satellite Click mini isn’t going to be the right product for everyone, but for students on a budget looking for a small, portable and practical device for use during lectures, it could be a real boon. It’s just what you’d expect for £250 – no frills and fancy features but a basic but effective device that gets the job done. We’ll just need to test out its responsiveness on the fully-finished device when it becomes available. 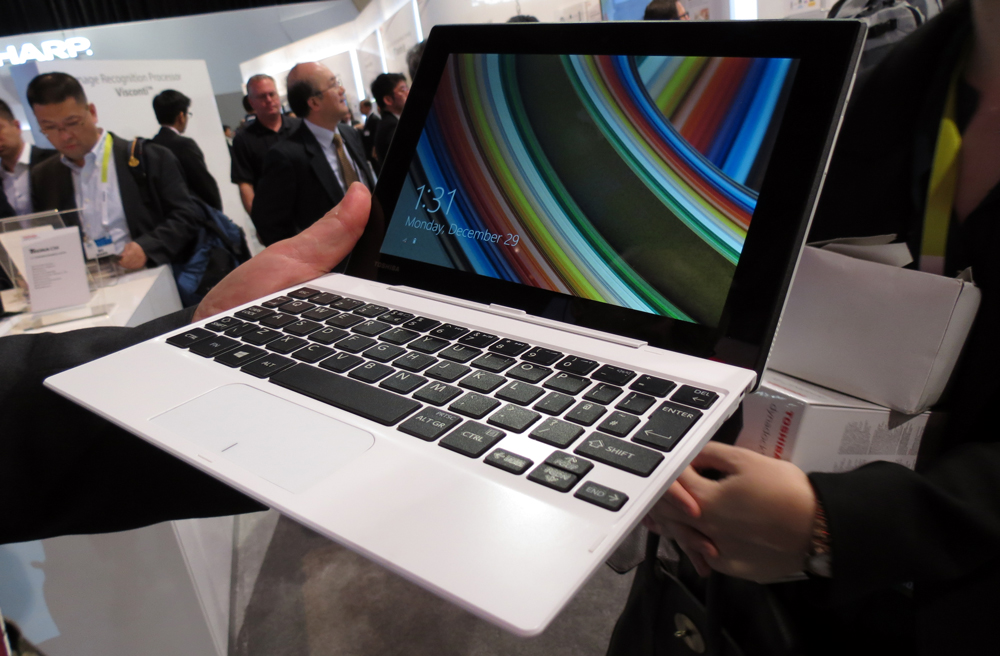 Toshiba’s European team took advantage of the huge international audience that flocked to CES 2015 in Las Vegas this week to show off its new Toshiba Satellite Click Mini detachable laptop/tablet hybrid. At just £250 it’s one of the cheapest around, but is it any good? We spent some hands-on time with the device at Toshiba’s stand at CES 2015 to find out. Also see: Best new tablets coming in 2016.

At just £250, the Toshiba Satellite Click mini is certainly aiming for the budget market, cheaper than many tablets and laptops but providing the functionality of both in one package.

It’ll be available to buy in the UK in white in the first quarter of 2015, or if you want the Satin Gold model you’re looking at a slightly longer wait until the second quarter of the year.

The Toshiba Satellite Click mini really is mini, and therefore a very portable little machine. It has an 8.9in screen housed in a chassis that, when being used as just a tablet weighs a reasonable 470g and is 9.8mm thick, and when used as a laptop with the keyboard attached weighs 999g and is 19.9mm thick.

We found it comfortable to hold as a tablet, and liked how easily it could slip into a bag (even a small one) and go unnoticed whilst walking around – ideal for students moving from one lecture to another, for example. 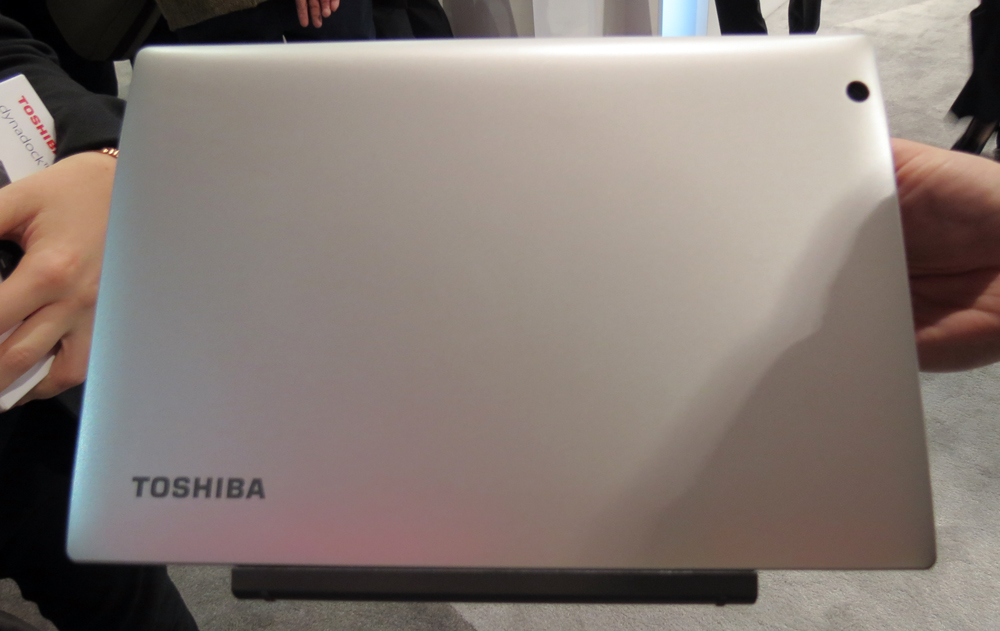 It’s not the best looking device we’ve seen, with a Satin Gold or Smart White Pearl design that’s pretty basic (the colour names definitely make them sound more stylish than they are).

The tablet clicks onto the keyboard using small black clips and a connector, and can be released using a small button at the top of the keyboard. Releasing the tablet was a much easier process than clipping it back on – even the Toshiba representative demonstrating the device had a bit of trouble, but we’re sure you’d quickly get the hang of it. 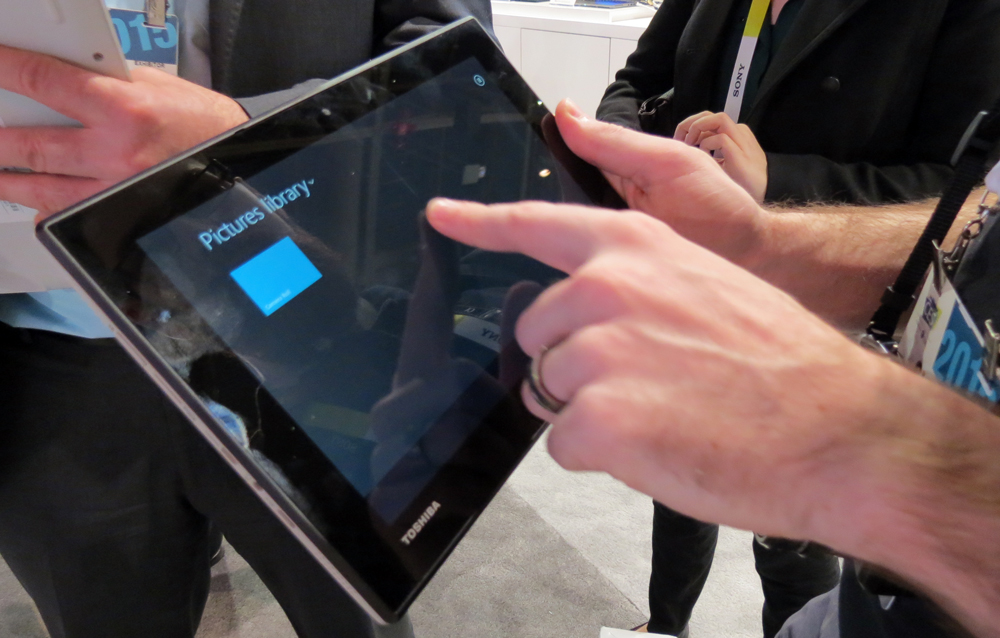 The Satellite Click Mini’s 8.9in IPS touchscreen display is better than we expected it to be, but far from outstanding. It has a Full HD resolution of 1920 x 1200 pixels, making a pixel density of 254ppi. We found it to be reasonably crisp and bright, but it’s a bit too small for achieving anything particularly productive – basic word processing and web browsing are its ideal uses. We also found it quite reflective during our time with the device.

Inside the Satellite Click mini is an Intel Atom Z3735F processor and integrated Intel graphics, which should provide decent responsiveness in day-to-day use but didn’t perform very well in our brief time with the hybrid. We’ll have to wait until we get our hands on a fully-finished review unit and carry out our benchmark testing to find out what tasks the Satellite Click mini is capable of achieving. 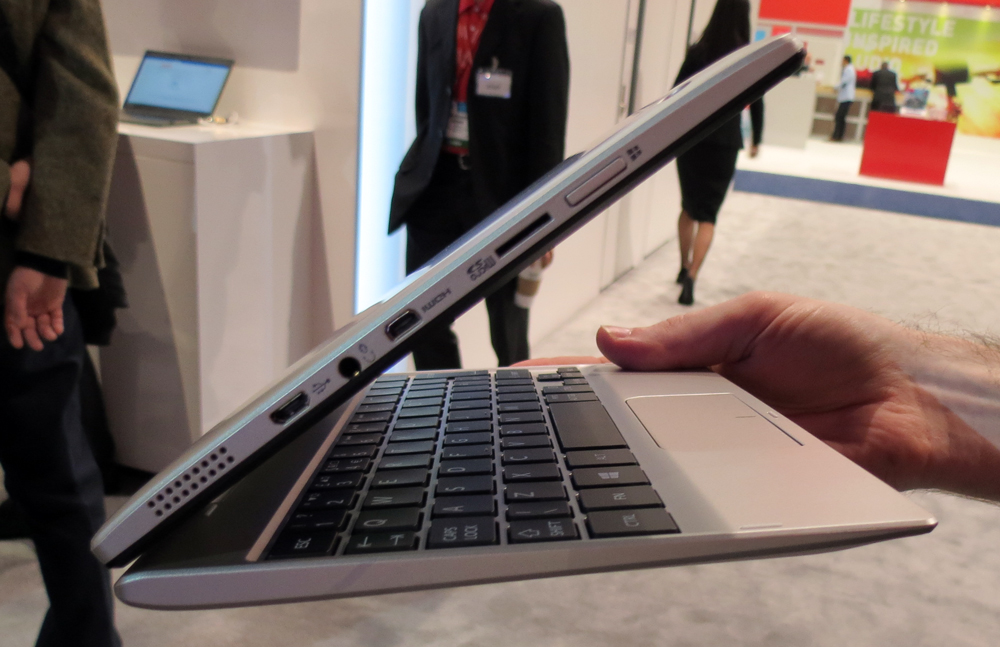 The good news is that there is 2GB of RAM and 32GB of storage space, with an SD card slot that allows expansion of up to 128GB. Other connectivity features include a full-size USB 2.0 port, full size SD (both on the keyboard), microHDMI out, MicroUSB, Bluetooth 4.0 and WiFi, though not the faster 802.11ac standard.

If having a tablet and a laptop in one isn’t enough for you, you can also use the Satellite Click mini to take photographs thanks to its two cameras. The rear-facing camera is 5Mp, while the front-facing camera is 2Mp and will come in handy for video calls.

We’ll have to hold out judgement on those cameras for our full testing, but they should do the trick for quick snaps of presentations in lectures, perhaps. In fact, the included TruCapture app will help with that, correcting colours and reducing reflection to help information become more legible. 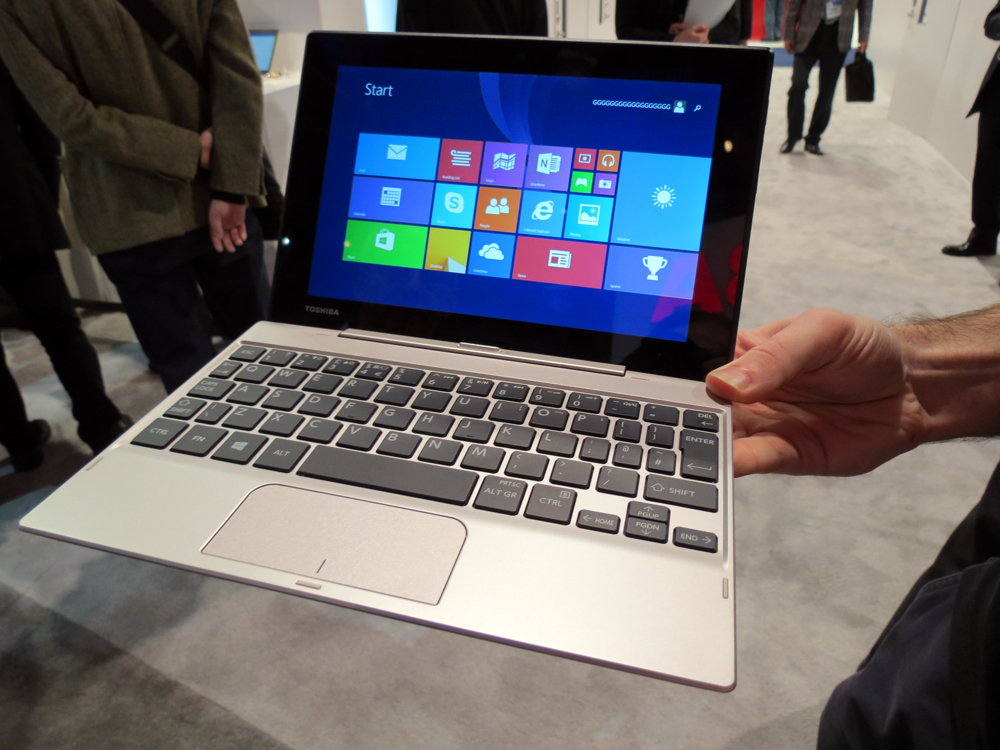 As mentioned previously, the Satellite Click mini runs Windows 8.1, and offers a year-long subscription to Microsoft Office 365 Personal, too, again handy for students looking to use this device for their studies. There’s also 1TB of OneDrive storage included, so if space becomes limited there’s still a way to store notes and other work.

The Satellite Click mini isn’t going to be the right product for everyone, but for students on a budget looking for a small, portable and practical device for use during lectures, it could be a real boon. It’s just what you’d expect for £250 – no frills and fancy features but a basic but effective device that gets the job done. We’ll just need to test out its responsiveness on the fully-finished device when it becomes available.