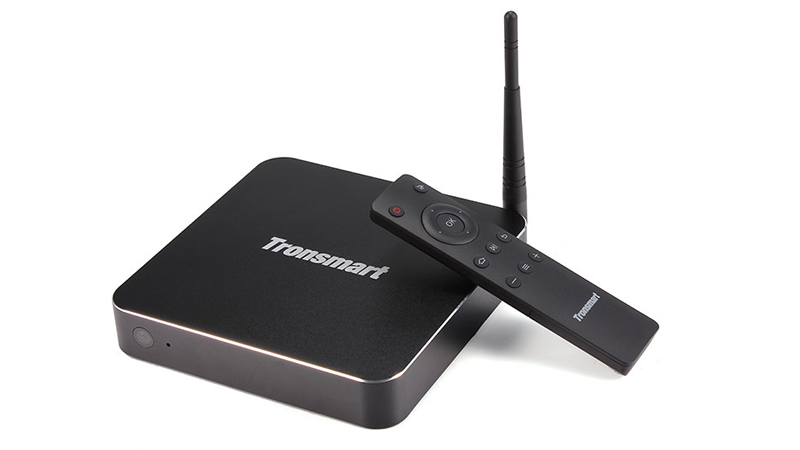 Tronsmart’s Draco AW80 is a great device, allowing you to turn any old TV into a super-smart Android PC. We’re not entirely sold on its design, but its price and functionality has won us over.

We heard a lot about Android TV at Google I/O. Tronsmart’s Draco AW80 in essence turns your existing television into an Android TV. Your TV then becomes a giant Android KitKat tablet, letting you browse the web, download apps, watch videos, catch up on your email and so on. The only difference is its lack of a touchscreen. Also see: How to connect Android to your TV

That’s quite a big difference, though, and as we’re sure you can imagine navigating Android without touch takes a bit of getting used to. We tried to operate the Draco entirely with the supplied remote control. The remote does have a mouse mode, letting you move the cursor using the directional buttons and hit Ok to select an option, but when trying to access the controls at the bottom of the screen and bypass the YouTube tutorial that appears on the first run of the app we eventually gave in and plugged in a USB mouse (a wireless mouse is preferable). If you’ll be doing much typing or web browsing then a keyboard will also be required – operating Android’s virtual keyboard with arrow keys on a remote or even using our USB mouse really is a pain.

Nevertheless, with Android installed you can turn any old TV into the smartest TV of all. You’re not restricted to whichever catchup services and apps the manufacturer stipulates either – you can do anything you can do on an Android tablet. Even if your TV is that old and rubbish that it doesn’t have an HDMI connection, Tronsmart supplies the necessary cable to hook it up via AV. (If you can use HDMI you’ll get a better picture, mind.) Able to support 4K Ultra-HD, the Tronsmart’s picture quality is limited only by that of your TV.

Tronsmart has preinstalled some apps to get you started, too. There’s YouTube, Netflix, Plex and XBMC, for example, plus access to the full Google Play store so you can download whichever apps, movies and even some games that you like. Even Skype is preinstalled, although your TV probably doesn’t have a webcam.

And the Tronsmart lets you connect additional devices, with three USB ports (one USB 3.0 and two USB 2.0), SPDIF and SD card slots and a SATA connection. It also supports DLNA, Miracast and AirPlay.

So, in theory, the idea is good. Great in fact. We really, really want an Android TV.

If you prefer, you can install Ubuntu 14.04 on the Tronsmart Draco. The AW80 supports the OS with hardware acceleration. For full details see the Geekbuying blog.

In practice the Tronsmart Draco AW80 is a slightly clunky solution. The box itself is reasonably well designed, 164x164x27.5mm, 440g, built from aluminium alloy with cooling vents and painted black. Less impressive is the external antenna, and if you don’t have a wireless router you’ll need to plug in a gigabit ethernet cable in addition to the power- and HDMI cables. And with mouse, keyboard and more also attached to the Draco, things can start to get a bit messy.

We can forgive all that, though, given this box’s functionality. Plus its price – currently just $149 (£95) from Geekbuying.com. Geekbuying.com is not a UK retailer, but will happily ship to the UK and will include a suitable mains adaptor for your country of residence. However, there’s a possibility you may incur extra charges at Customs; we didn’t have this problem. Read our  advice on buying grey market tech here.

On paper the Draco’s specs are pretty good. It lists a 2GHz octa-core Allwinner A80 (ARM big.Little Cortex A15/A7) processor, along with 2GB of DDR3 RAM and 64-core PowerVR G6230 graphics. Other highlights include 16GB of internal storage, the very latest dual-band 802.11ac wireless support, Bluetooth 4.0 and the aforementioned SATA, HDMI and USB 3.0 OTG connections.

As an Android device we ran the Tronsmart Draco AW80 through the same tests we use to benchmark Android phones and tablets. Its SunSpider web browsing score was very good, and we recorded a super-low (for Android, in any case) 657ms. Multi-core performance in Geekbench 3 was also pretty good, with the Draco turning in 2579 points. In the single-core component it managed 799 points. Finally, we recorded graphics performance using GFXBench 3.0, in which the Tronsmart managed 9fps in Manhattan, and 22fps in T-Rex.

These are all strong results, if not as strong as those of some phones and tablets we’ve tested (see What’s the fastest smartphone). So it’s interesting that AnTuTu, a benchmark not in our usual portfolio, marks out the Draco AW80 as one of the fastest Android devices, with a score of 55106. Still, benchmarks are all to be taken with a pinch of salt, and in our real-life testing of the Tronsmart it seemed plenty fast to us.

We should probably note that the Tronsmart Draco AW80 is rooted, and is preinstalled with the SuperSU app, which offers advanced access management for apps that require root. The Tronsmart is still able to receive OTA updates, according to Geekbuying.com.