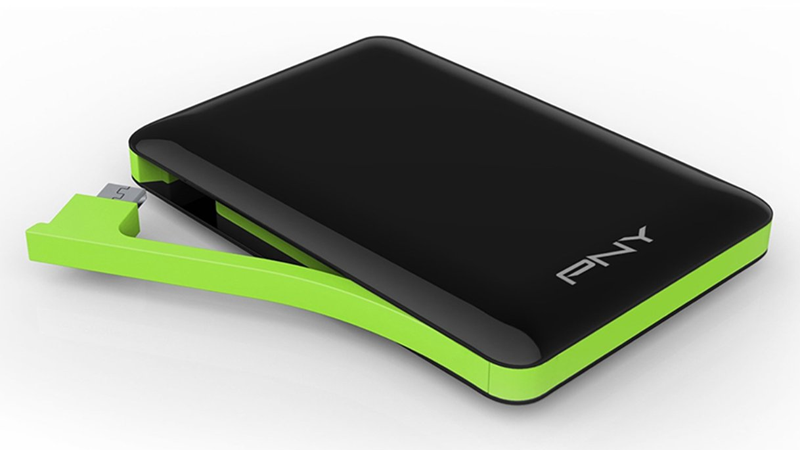 PNY’s PowerPack M3000 has enough power to give your smartphone a full charge, and it’s sufficiently small and light that you won’t even notice it in a pocket or bag. It looks good, feels tough, and does away with loose cables. iPad- and iPhone users should look instead to the LM3000.

There’s a lot to like about PNY’s ultra-portable M3000 PowerPack. This power bank slips virtually unnoticed into a pocket or bag, and its built-in Micro-USB cable removes the need to carry around a cable for charging your Android phone or Android tablet. Also see:  Best power banks 2018.

The PNY M3000 is unsuitable for iPad and iPhone users (they will want to investigate the LM3000), but its built-in Micro-USB cable will be suitable for the vast majority of Android and Windows Phone smartphones and tablets. We would like to see the option of a full-size USB output, allowing you to plug in a proprietary cable, but I don’t intend to go down the Lightning route any time soon.

The Micro-USB cable very neatly slots into the side of the device, although we did find that after only a couple of uses it began to bulge out slightly at the side, having been bent backward to plug into our phone. It’s a reasonably rigid cable, and doesn’t feel as though it will be easy to break, but this also means you won’t be able to place down the M3000 beside your phone or tablet. We found it was easiest to use the PNY PowerPack with it sitting underneath our smartphone. You then just tap the button on the side to begin charging.

The device itself feels pretty tough, too, which is reassuring given that PNY doesn’t supply a carry case. But built from strong black plastic with a green trim, this good-looking device needn’t be hidden away. PNY does offer a one-year warranty, should you encounter any problems.

The PNY PowerPack is ultra-slim and light, at just 58x85x13mm and 118g. It’s a perfect travelling companion that will also be ideal for daily use. That’s great if your phone battery packs up for the day before you’ve even finished your lunch break.

PNY says you can expect up tp two charges from its 3000mAh lithium-polymer battery. With most power banks offering circa-70 percent efficiency (some power is lost through heat generated and voltage conversion), you should expect not much more than 2100mAh to be available to your devices. We can’t think of any phones that would receive two full charges with that amount of power to hand, but the PNY PowerPack should fill most smartphone batteries once.

This relatively low capacity, balanced with the power bank’s 5W output (not too slow but certainly not what we might consider fast charging), it’s unlikely that you’d use the PNY PowerPack with a tablet. That doesn’t mean you couldn’t, of course. Also see:  how to charge your smartphone or tablet faster.

The absence of features such as passthrough charging (allowing you to use the power bank as a USB hub), an LED display, built-in flashlight and auto-on/-off isn’t a particular surprise for such a diminutive device, especially one that costs just £22.99 at Amazon. The PNY PowerPack’s price-capacity ratio isn’t as high as that of some power banks we’ve reviewed, but its asking price is far from extravagant.